Dmitry Bivol scores unanimous decision over Craig Richards, open to anyone at 168 or 175 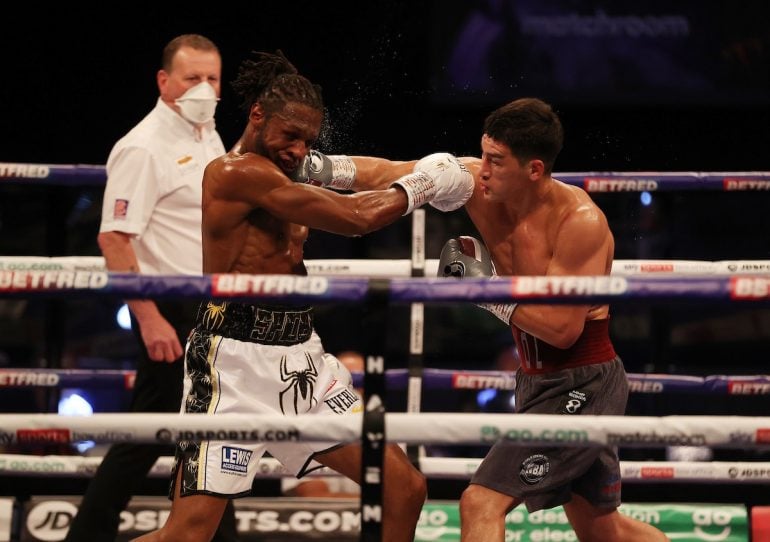 Fighting in the chief support to the heavyweight main event featuring Derek Chisora and former titleholder Joseph Parker, Bivol had no problems as he cruised to a unanimous decision victory in a methodical, calculated performance. He won by scores of 118-110, and questionable scores of 115-113 and 115-114 to retain his WBA title for the eighth time.

“[The] fight was very tough for me because he’s a smart boxer,” Bivol said in his post-fight interview. “After one-and-a-half years [out of the ring], I think [my performance was] okay.”

The 29-year-old Bivol (18-0, 11 KOs), of Russia, took control from the outset, using his jab and quick combinations to keep Richards at bay.

Richards (16-2-1, 9 KOs), 31, of London, could not get much going on offense. He came out firing with the jab in the opening frame, but Bivol blocked them all behind a tight guard before countering to the body.

Bivol, who is rated No. 2 by The Ring at light heavyweight, countered Richards with a left-right combination in Round 11 that knocked him back on his heels. Richards, who was coming off a ninth-round stoppage of previously unbeaten prospect Shakan Pitters in December 2020, gave a valiant effort but was thoroughly outclassed.

Bivol, who closed the show with a barrage of left hands, has previously expressed interest in unifying the light heavyweight division, as well as moving down to 168 pounds.

“It doesn’t matter who wants to fight me first; I’m open for everyone from [the] light heavyweight division to [the super middleweight division], the top fighters.”