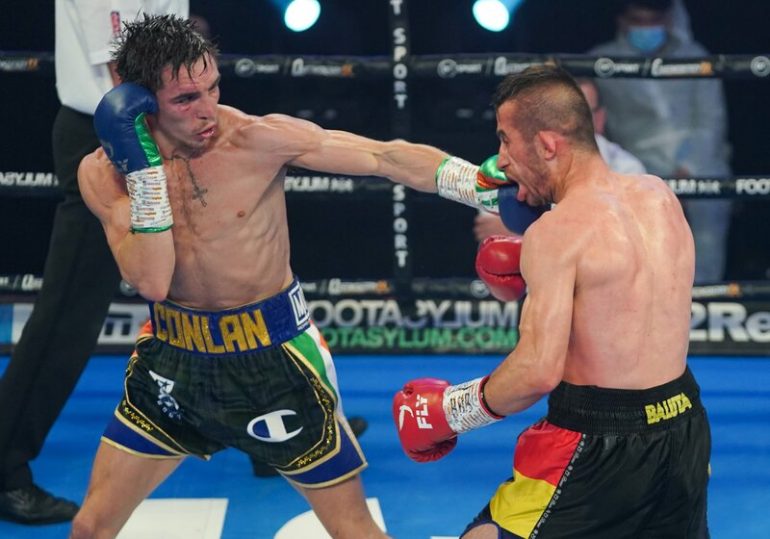 “He was tougher than I thought, he was as game as they come but he was missing tons of punches. When they called it a draw I wondered what was going on,” said the Irishman. “But it was a good fight, [and good] preparation for what’s to come.”

It was Conlan’s first 12-rounder and his first contest down at junior featherweight and he called it “a perfect test”.

After the customary feeling out process in the early going, Conlan switched southpaw to land a straight left hand with a minute left in Round 1 and he stayed in that stance for the remainder of the session.

The second was largely scrappy. There was a good Conlan left hook in there but Baluta was wrestled to the deck and caught by a counter right hand near the end of the round.

Adam Booth-trained Conlan was a step ahead in Round 3 but the fourth was gritty as Baluta proved stubborn and he came out firing in Round 5, too.

Conlan was trying to slow him down with rights to the body while marching forwards and making Baluta work to keep him off.

Near the start of the sixth Baluta was down from a pair of rights to the body but referee Steve Gray deemed it was a lack of balance and not a lack of durability that caused him to drop. He didn’t rule it a knockdown.

Both fighters had success with the right hand in Round 7, they were boxing with confidence and belief and it made for an entertaining fight and Baluta was well in it.

Conlan started to invest more downstairs in the eighth, as per Booth’s instructions between rounds, and Baluta started to show signs of fatigue for the first time.

The fighters tangled messily in the ninth and Baluta hit the ground hard with Conlan on top of him but the action was soon back on.

Baluta was a handful in Round 10 and you could have made a case for him outworking the Irish star but Conlan was better in the 11th, catching Baluta on the way in and making him miss often.

The 12th was more of the same, the quality from Conlan, the quantity from Baluta.

Conlan is now the No. 1 contender for WBO junior featherweight titleholder Stephen Fulton and he said he hoped to faced Fulton in Belfast in August or in New York in the winter.

Williamson started fastest but southpaw Smith began to get a foothold as the fight progressed. Then, suddenly, it was all over in the sixth. Williamson broke through and smashed away with both hands before focusing on the right. He let several more go and as referee Bob Williams tried to intervene Smith pitched face first, down and out.

It was an eliminator for Ted Cheeseman’s British title.