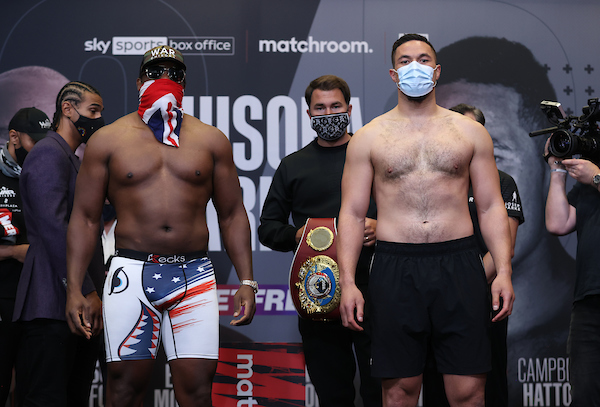 Derek Chisora and Joseph Parker during their Weigh In ahead of their Heavyweight Contest tomorrow night. (Picture By Mark Robinson Matchroom Boxing)
30
Apr
by Joseph Santoliquito

Derek Chisora finds himself staring at his relevance. The 37-year-old will be facing Joseph Parker (28-2, 21 knockouts) Saturday night, which will be broadcast live on Sky Sports Box Office in the England and DAZN in the United States from Manchester Arena in Manchester, England.

They weighed in Friday, with Chisora tipping the scales at 250.8 pounds, the lightest he’s been since he weighed 246¼ for his December 2018 rematch loss with Dillian Whyte.

Parker came in at 241.2 pounds, almost two pounds less than what he weighed for his victory over Junior Fa just eight weeks ago.

Both fighters have new trainers.

Parker parted ways with Kevin Barry and has moved on to Andy Lee, who worked with heavyweight champion Tyson Fury. Chisora is now being trained by Buddy McGirt.

As of this posting, Chisora was raising a fuss claiming he will refuse to fight Saturday night if he does not walk to the ring second after losing a coin toss to Parker as to the choice of who walks into the ring first.

CHISORA HEADING HOME? 🏠@DerekWarChisora has claimed he will refuse to fight tomorrow if he does not walk to the ring second after losing a coin toss to @joeboxerparker. 🤔 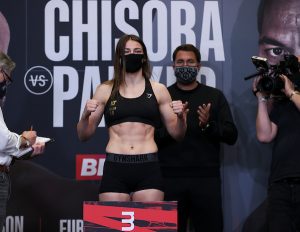 Katie Taylor for her weigh-in vs. Natasha Jonas ahead of their WBC, WBA, IBF and WBO Female Lightweight Title fight May 1, 2021 (Photo By Mark Robinson Matchroom Boxing)

The pair have some history. Taylor decisioned Jonas in 2012 in the quarterfinals of the 2012 London Olympics, eventually won by with Taylor. 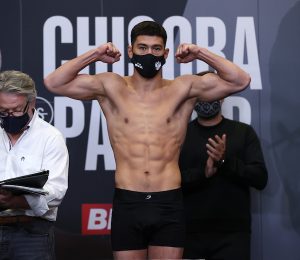 Dmitry Bivol during his weigh-in vs. Craig Richards ahead of their WBA World Light-Heavyweight Title fight for May 1, 2021. (Photo By Mark Robinson/Matchroom Boxing)