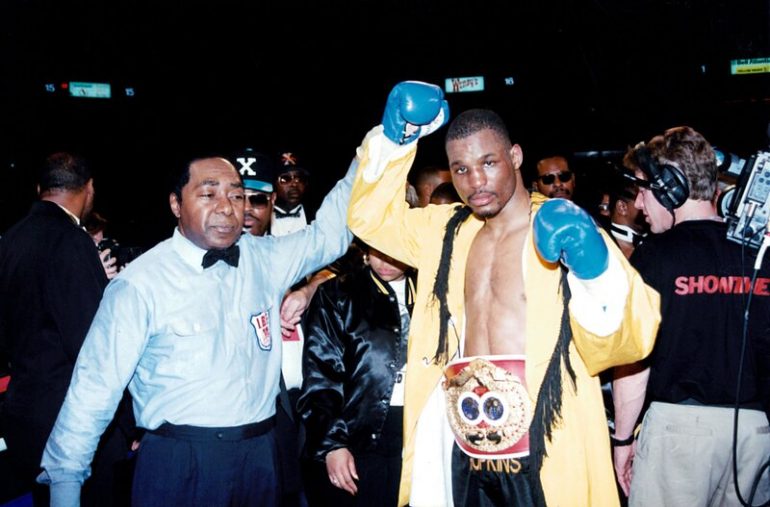 The dictionary definition of “serendipity” is the occurrence of events by chance in a happy or beneficial way.

With the 26th anniversary his rematch victory over Segundo Mercado at hand, a fight that finally made him a world champion in his third shot at the IBF middleweight title, Bernard Hopkins readily admits that his seventh-round stoppage of the Ecuadorean in Landover, Md., on April 29, 1995, was a most serendipitous moment in a legendary, 28-year professional boxing career that earned him a spot in the International Boxing Hall of Fame’s Class of 2020, his first year of eligibility.

“You can have a lot of hopes and dreams beaten out of you as time goes on, and I’m not just talking about what happens in the ring,” B-Hop, now 56, recalled when contacted for this story. “You got to deal with the politics of boxing, with the business side of boxing. You got to find a way to fight and win there, too.

“A lot of it is being in the right place at the right time. It’s, uh … what’s that word? Sere-something?”

It is suggested to Hopkins, who seldom is at a loss for words, that the word he might be thinking of is serendipity.

“Yeah, that’s it,” he agreed. “Serendipity. That’s a part of it. Did I put in the work to get to that point (finally becoming a world champion)? Absolutely. But other things, I can’t explain. A lot of things came together for me because I was in the right place at the right time. Maybe I had some angels looking out for me.” 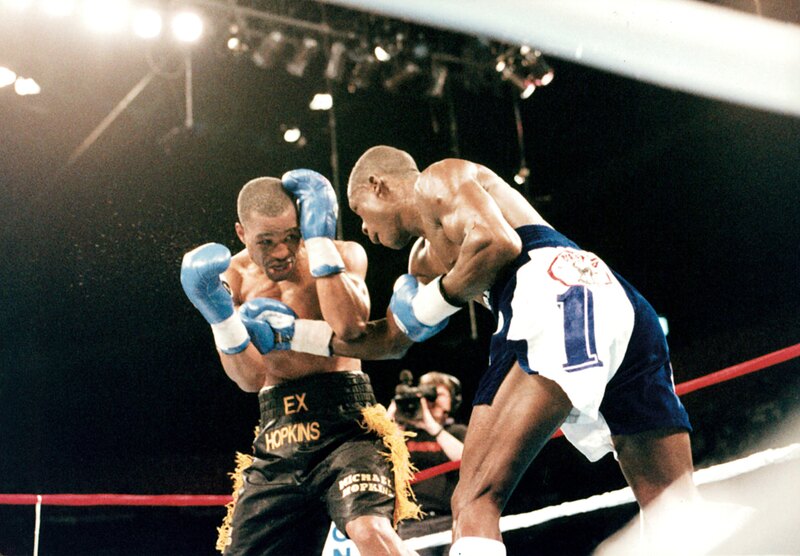 Hopkins gets it right in the Mercado return. Photo by The Ring Magazine/ Getty Images

With or without the assistance of angels, being touched by serendipity at a crucial moment – Hopkins, a longtime irritant to the boxing establishment’s power brokers — is unsure if he ever would have wangled a fourth opportunity to fight for a world title had he lost the do-over with Mercado, against whom he overcame two knockdowns to salvage a split draw in their Dec. 17, 1994, bout for the IBF 160-pound title that had been vacated by Roy Jones Jr., who had moved up to super middleweight. Jones was the opponent for Hopkins’ first bid for the IBF middleweight belt, which was also then vacant, a fight won by Jones on a unanimous decision May 22, 1993, in RFK Stadium in Washington, D.C. Interestingly, given all that Jones and Hopkins would go on to achieve in their superlative careers, that bout was the lead-in to the main event that night, in which Riddick Bowe defended his WBA heavyweight title with a second-round knockout of Jesse Ferguson.

Following the loss to Jones (they would fight again, 17 years later, with Hopkins winning a 12-round unanimous decision in a non-title light heavyweight matchup at Las Vegas’ Mandalay Bay), Hopkins went back to the drawing board, stringing together knockouts of Roy Ritchie, Wendell Hall and Melvin Wynn, and a unanimous decision over Lupe Aquino, to put himself in position to again fight for the vacant IBF middleweight crown, against Mercado. But although Hopkins and Mercado were the IBF’s two highest-rated contenders, the Philadelphian said he arrived in Quito, Ecuador, for a matchup where the hometown fighter seemed to enjoy every conceivable advantage, not the least of which was Quito’s elevation of 9,350 feet above sea level.

“It was more of a physical test for me than a strategic one because I wasn’t there long enough to get acclimated to the elevation,” Hopkins said. “I should have come in three weeks before the fight, not three days (the travel arrangements were made by promoter Don King, who had Mercado).

“Look, I was going to Ecuador to fight an Ecuadorian who’s promoted by Don King on a Don King-promoted show. I’m fighting up in the mountains in thin air the other guy grew up breathing. I’m going there with everything against me.

“When we hit town, we find out the country’s under martial law. It’s a police-state kind of situation. You got guys with M-16s and Uzis everywhere you turn. And everybody’s hostile toward us because we’re fighting their guy.”

And if all that weren’t enough, Hopkins said he and his small party, which included his then-promoter, Butch Lewis, and trainer Bouie Fisher, had been booked into a “fleabag” hotel by King and assigned to work out in a rundown gym that was too far away and had dog droppings on the floor.

Perhaps affected as much by the thin air as by Mercado’s punches, a gasping Hopkins was floored in the fifth and seventh rounds. But somehow he found a way to finisher stronger down the stretch. Judge Al DeVito scored the bout 114-111 for Hopkins while Paul Gibbs saw it as a 113-113 standoff and Francisco Hernandez, from Colombia, favored Mercado by 116-114.

“I think I pulled it out in the last two rounds,” Hopkins said after the fight, which made his record 26-2-1 (19 KOs). “I’m fighting at high altitude, everybody thought it would bother me. But it bothered Mercado more than me.”

Mercado enjoyed plenty of success in fight one. Photo by The Ring Magazine/ Getty Images

“I knocked him down twice,” Mercado said. “I beat him, but Bernard Hopkins is a very good boxer. I admire him. I hope we can do this again.”

Mercado got his wish four months later, but maybe he should have wished for something other than a second go at a fighter as highly motivated as was Hopkins, who lived up to his nickname as “The Executioner.” Not only was Hopkins fighting in a more hospitable American setting, just 133 miles south of Philly and at an elevation of 52 feet above sea level, but he had a suspicion that he could not afford to come away empty-handed in his third bid for the championship.

“It was my third shot at the title and you know what they say, three strikes and you’re out,” Hopkins said at the time. “I had to hit a home run. I was on United States soil, not at elevation, so I had no excuses. The way I looked at it, I was defending a title I’d already won. Take away the advantages (Mercado) had in Quito and there’s no way he could beat me.”

It should be pointed out that Hopkins-Mercado 2, which was televised by Showtime, was not even the main event that night. Top billing instead went to IBF junior middleweight champion Vincent Pettway’s sixth-round knockout of three-time former world titlist Simon Brown.

But finally winning his first world championship – even in a co-featured bout, and at the relatively advanced age of 29 – provided B-Hop with the advantages of a word that proved as important to him as serendipity.

“If I didn’t accomplish that (the victory in Landover) or even get the draw in Ecuador, I don’t know if I would have been as successful after that,” Hopkins said. “Maybe I wouldn’t even have gotten another shot at the title if Mercado had gotten the decision in Ecuador. The only reason there was a rematch is because the title was still vacant and me and Mercado were ranked 1 and 2.

“I’m not saying (another opportunity to fight for a world title) couldn’t have happened, but it would have been much more difficult. It could have happened another year or two down the road, but by then I’d be in my 30s. Would I have stayed as dedicated and disciplined if I had to fight my way back up the ratings again? I know I would have stayed out of the kind of trouble I was in before (that landed him in prison), but I also might have gotten so frustrated I would have tried to find something else to do.

“It’s a whole different matter when you don’t have any leverage, and that’s in anything, let alone boxing. It’s like you’re nothing; you don’t even exist. But having a world title gives you some leverage, and if you keep holding it, that leverage can only increase.” 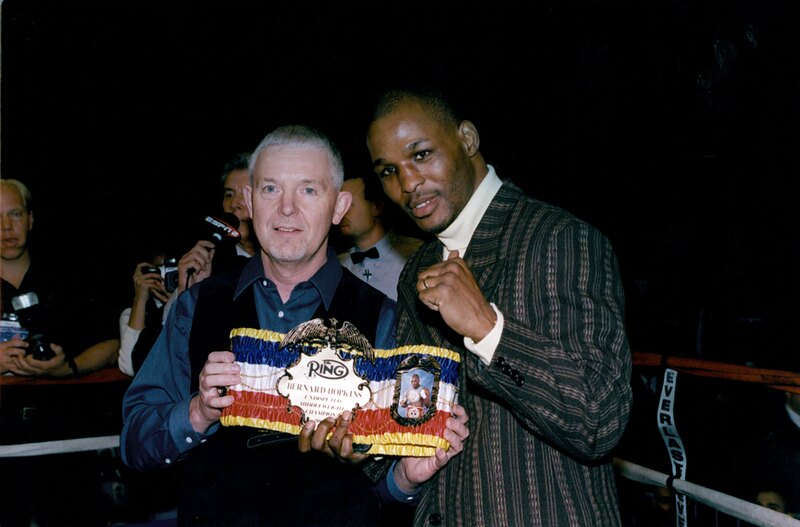 Hopkins, seen here with former editor in chief Nigel Collins, would go on to win belt after belt at 160 and 175 pounds. Photo by The Ring Magazine/ Getty Images

Hopkins retained the IBF title through a division-record 20 defenses, along the way adding belts from the WBC (UD12 over Keith Holmes on April 14, 2001), WBA (TKO 12 over Felix Trinidad in a career-best performance on Sept. 29, 2001) and WBO (KO 9 over Oscar De La Hoya on Sept. 18, 2004). At each and every step along the way his resolve was hardened by the belief that those in control of his sport desperately wanted to see him dethroned and humbled.

“To me, everybody was my enemy,” Hopkins said of his me-against-the-world mentality that obviously served him well for a long time. “Not saying that they were, but that was my concept. I was called paranoid about this, paranoid about that. But as time went on, people – some people – started looking at me different. They were, like, `Maybe he’s not crazy. But if he is, maybe he’s crazy like a fox.’”

Hopkins was one of those athletes who seem happiest when they’re unhappy, like tennis’ John McEnroe. He doesn’t get mad, he gets even. Even the slightest provocation can get him stoked, and nothing lights that particular fire like the notion he is being dismissed, disrespected or disenfranchised. His showdown with the undefeated and favored Trinidad in Madison Square Garden is a prime example. He fought with controlled rage upon discovering that his own promoter, King, had had the Sugar Ray Robinson Trophy pre-engraved with the name of Trinidad, a preferred member of the DKP stable.

Like fellow paranoids Richard M. Nixon and Bobby Knight, Hopkins read and listened to every negative thing anyone ever wrote or said about him. He compiled an enemies list, at least in his mind, and it pleased him greatly when those who would draw pleasure from his toppling were again left red-faced and embarrassed.

It might not be quite accurate to say that Bernard Hopkins has mellowed, but he has found pleasure in remembering significant dates from his boxing past, not the least of which is the fight that gained him entry into the inner circle of world champions. He finally got around to watching the tape of his conquest of Mercado (who went 1-7-1, all the defeats inside the distance, after his beatdown by B-Hop), in February or March of 2020, after he discovered it in a closet.

“I got so much stuff, I didn’t even know I had that tape,” he said. “At least I didn’t know where it was, but I found it when I started going through, I don’t know what you’d call it, my archives.

“Watching that tape refreshed so many things in my mind. I got joy from watching that fight again. I made right all the things I could have done better the first time. I have a pattern of making things right, or better, whenever I fought somebody a second time, no matter which way it went the first time.”