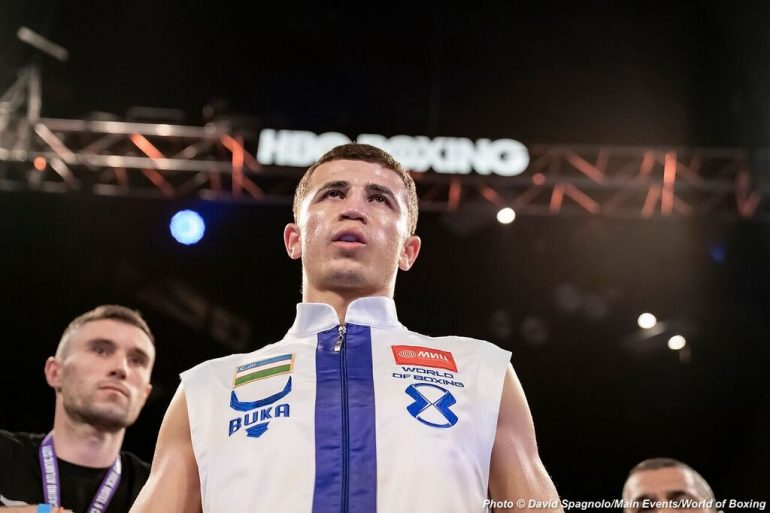 Highly touted junior middleweight prospect Israil Madrimov showed he is a force to be reckoned with by dropping and widely outpointing big-punching Emmany Kalombo over 10 rounds in Tashkent, Uzbekistan in early April.

The 26-year-old was able to impress his countrymen in a homecoming fight.

“This was an important fight for me,” Madrimov (7-0, 5 knockouts) told The Ring through Alik Frolov. “I looked at this as a fight to raise my experience, and I wanted to put on a performance for my home country of Uzbekistan.”

Madrimov fought for the first time since having surgery to repair a tendon in his left shoulder. He suffered that injury against Eric Walker (W UD 12) last August.

“After having my shoulder surgery, it caused some worry, and I had to persevere in training to be ready quickly enough. I really wanted to be a part of this show at home,” he said.

“I felt good in the ring. This wasn’t a full training camp for me because of time constraints, but now, after going the distance, I have the confidence back and will be ready 100-percent for my next fight.”

Vadim Kornilov, Madrimov’s manager, had several of his other Uzbek fighters on the same card including headliner Murodjon Akhmadaliev, who successfully defended his IBF and WBA 122-pound titles.

Kornilov feels that Madrimov’s performance against the previously unbeaten Congo-born fighter will be beneficial to his career going forward.

“We really needed this type of fight for him,” said Kornilov. “A tough, big guy that wasn’t going to make it easy for anybody. We feel that Israil is still gaining enough experience to fight at the very top level of the sport and this performance brought us a lot closer.”