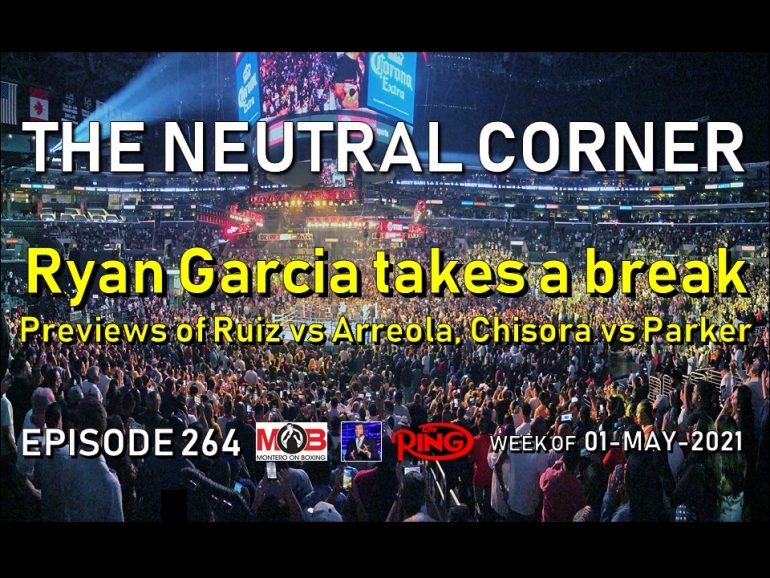 On episode 264 of The Neutral Corner boxing podcast, host Michael Montero gave his thoughts on Ryan Garcia withdrawing from his scheduled fight on July 9 with Javier Fortuna, citing mental health issues as the reason behind his decision.

Many are criticizing Garcia for pulling out of the bout, yet Montero argues that timing is everything. The 22-year-old made his decision to walk away two and a half months before the bout was set to take place, giving Fortuna plenty of time to make other arrangements.

In other news, Vasiliy Lomachenko is set to return to the ring on June 26 against Masayoshi Nakatani in Las Vegas. It will be the first bout for the former three-division titleholder since losing to Teofimo Lopez last year.

Eddie Hearn will end his long-time partnership with Sky Sports in July, per reports. The Matchroom Boxing kingpin will be exclusive to sports streaming platform DAZN, going forward.

Mark from Ireland had some strong words for Eddie Hearn. From my own points of view, I don’t think Eddie’s heart has been on UK boxing at all recently,” he told RingTV. “It’s pretty much PPVs. For the regular Sky shows, I have to watch Joe Cordina headline. I think there is going to be a massive backlash in the next couple of years. And I feel he may be going into the unknown with this new DAZN deal.”

Ace from Ventura, California has been shying away from buying PPV cards recently, but is considering the Ruiz vs Arreola show. “The price point of $50 is good,” he said. “Yeah it shouldn’t be PPV, but it’s one of those things where you want to support the fighters. I think I might get it just for the hell of it, there’s nothing else going on this weekend.”

Ceylon wondered why so many are favoring Artur Beterbiev to dominate in a proposed light heavyweight unification with Joe Smith Jr later this year. “It seems like everyone forgot that the fight between Beterbiev and Smith was scheduled for 2018,” he said, “and then Beterbiev’s people cancelled it. I think it’s because they knew Smith is not the easiest guy to get in the ring with. Smith didn’t look good against Vlasov, but if he brings to Beterbiev what he brought to Alvarez, I think he beats him.”

Hamed, like many fans, is losing interest in the welterweight division, mainly because Errol Spence and Terence Crawford do not seem interested in fighting. “A lot of people criticize the heavyweights but we did manage to see Joshua and Klitschko fight, and Wilder and Fury fight twice,” he said. “But in the welterweight division, we haven’t had the best fighting the best. If Pacquiao and Spence fight and Crawford and Porter fight, and then the winners face each other, I wouldn’t mind seeing that.”

E’san Brodi sees the plan for Gervonta Davis between his handlers at PBC and the WBA. “I think what they want to do is get Tank that 140 WBA “regular” belt (when he fights Michael Barrios on June 26),” he said. “The Taylor vs Ramirez winner will move up to 147 pounds, making all the titles vacant. What will the WBA do? They’ll elevate Davis to “super” champ, and then PBC will have their stamp in the 140-pound division.”

@17:45 thoughts on Ryan Garcia pulling out of fight