Floyd Mayweather v Logan Paul On, For June 6, in Miami 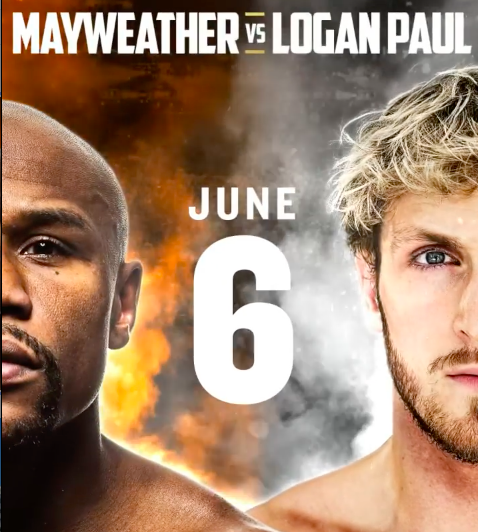 UPDATE: Floyd Mayweather, who turned 44 in February, took to social media on Tuesday late afternoon to let the world know that he’s got a fight scheduled.

On June 6, a Sunday, Mayweather will take on Logan Paul, a 26 year old Internet personality, in what is described as a “historic crossover event” on the Mayweather Promotions IG page.

On his own page, on IG, Mayweather relayed that he will do battle in Miami, at Hard Rock Stadium.

That makes Miami a crowded house for boxing, what with the Triller Teofimo Lopez card unfolding on Saturday, June 5, also in Miami.

Showtime and Fanmio are collaborating, it seems, so we will have to see how that promotion looks. 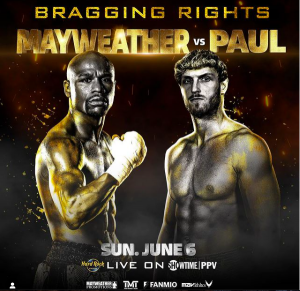 Paul is the older brother of Jake Paul, who has surpassed big bro as a ring talent, arguably. Logan holds an 0-1 mark as a pro, with his lone outing resulting in a loss to KS1 on a DAZN/Matchroom card in November 2019.

Mayweather last gloved up for real in 2017, when he met 0-0 Conor McGregor in Las Vegas.

The proposed Floyd Mayweather contest against Logan Paul had been set to take place Feb. 20, but, if you recall, it was announced on Jan. 23 that a new date for the clash would be selected.

There seemed to be movement on that front, with world leaking six days ago that on June 5, Mayweather would be gloving up against the older brother of You Tube magnet/neophyte pugilist Jake Paul.

But as of this second, the public isn’t in the know about the sports entertainment faceoff.

Fanmio, a platform which offers meet ‘n’ greets with celebs for a fee, put out the news that Floyd would be gloving up against the older of the Paul brothers on Dec. 6, 2020.

On their website, they still advertise that the fight will go down, but no date is offered, and currently, one isn’t able to order the tussle. 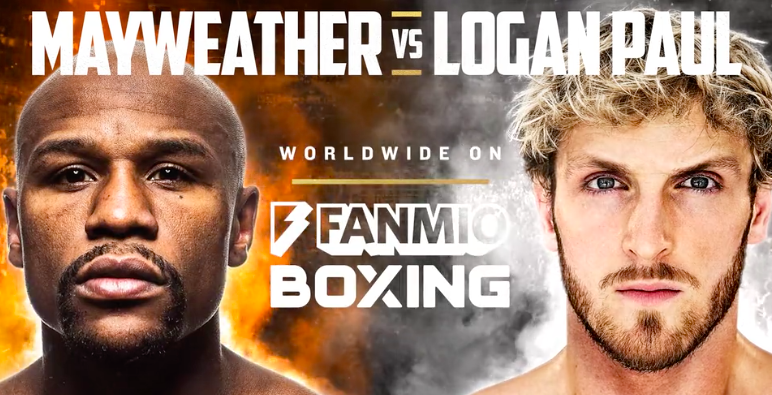 I had purchased the fight on FanMio in January, and in fact, sent out a query to their customer service, about receiving a refund.

I received the below response from Fanmio, on April 22: 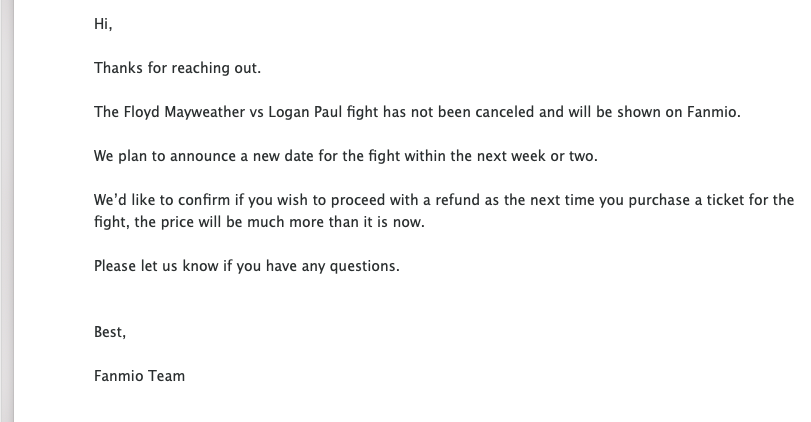 If you have been following this story, you probaby know that Mayweather took to his Instagram account, and did a poll as to where fans would like to see him fight. 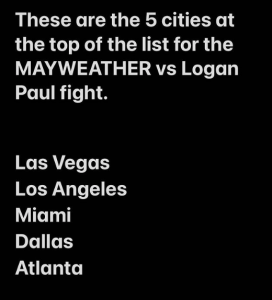 On April 9, he’d put out photographic evidence that something big was cooking, possibly. 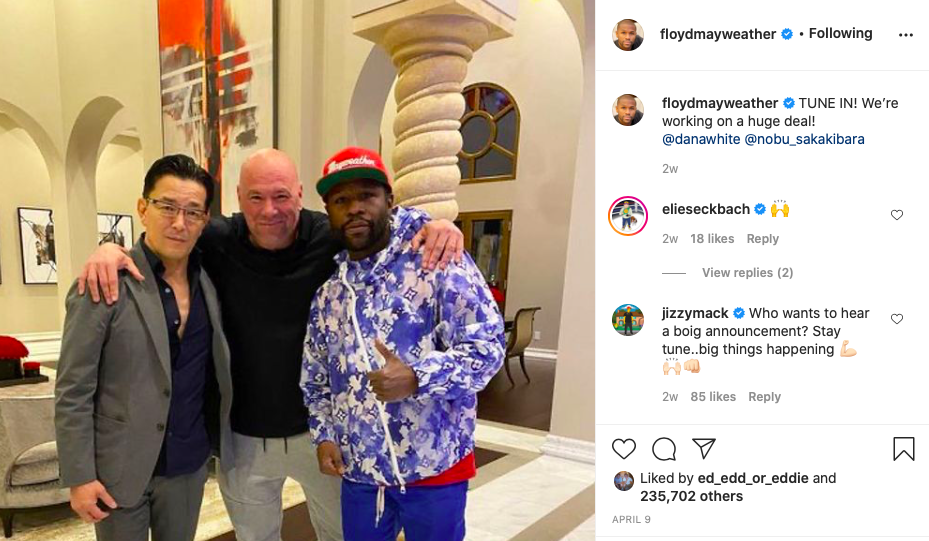 I messaged Floyd’s guy Leonard Ellerbe, to see if he had any info, but hadn’t heard back. Ellerbe had sparred some with “Mikey Sources” Coppinger, see below, from April 22: 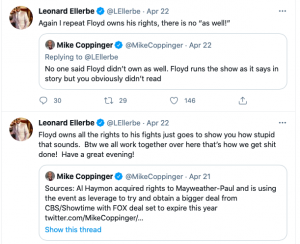 I also messaged a Fanmio PR person, on April 26, and will insert any pertinent info from their side if I get material.

In the absence of news, the rumor mill is, of course, fertile. We’ve heard that maybe the fight is off, with one reason given is that Mayweather wanted “too much” money, perhaps $125 million or so. We did learn on April 23, when Showtime boxing boss Stephen Espinoza went on Chris Mannix’ podcast, that it looks like Showtime would be the platform provider for the Floyd re-entry into the active fighting scene. 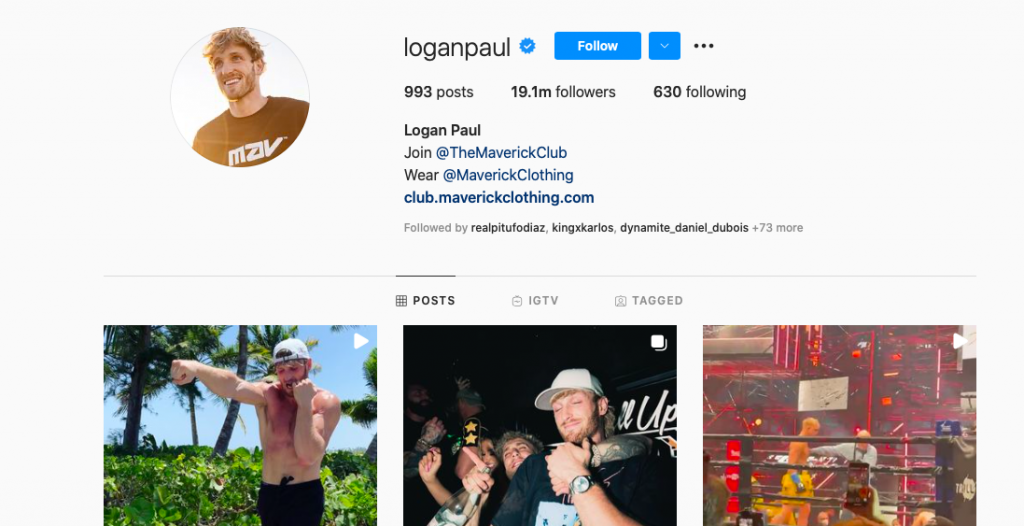 The Pauls have almost 35 million Instagram followers between them, older brother Logan leads Jake by four million. Floyd leads with 25.3 million as of April 27.

“In terms of the specifics, it is premature,” Espinoza said to Mannix.

“You know, there are reports out, one of which has sort of pegged the date as June 5th. It’s definitely not June 5th. It never has been. There are a few dates that we’re sort of circling and a few venues. You know, Floyd put up a poll [on Instagram] earlier, a few days ago, about different cities. And that’s really where we are. I do expect some definitive resolution within, I don’t know, the next few days, the next week roughly. But there really isn’t – I’m not trying to be coy – it hasn’t been determined, date, venue, etc.”

One source who has kept tabs on the whole endeavor said to me on Monday night that they heard that an investment chunk that had been dangled by potential backers of a Floyd v Logan rumble had been removed from the table, and that took the wind out of the sails of the drive to set a firm date.

But we all have trod this path before; we know that Mayweather is an ace at message control, and that he will share details about his plans when he is darn well ready.

Basically, it’s time to hurry up and wait, we’ll know when we know, and we are on Mayweathers’ time-table.