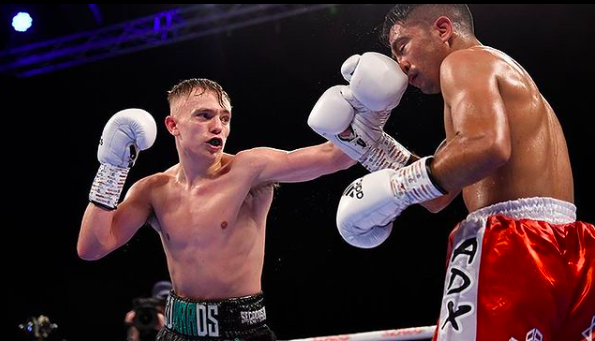 “This is the biggest fight of my career, the hardest night I would ever have had, against the highest quality of opponent I’ve ever had,” Edwards told The Ring. “He’s a great fighter and a great champion. He’s ranked No. 1 by The Ring magazine, so arguably he’s the best out there at the weight.

“I’ve got to be the best version of myself to beat Moruti. I feel like I’m ready, my style meshes well with his style. I feel it’s one of them fights, I win on the cards or I get stopped. I think he’ll struggle to outpoint me. I’m like a Rubik’s cube, I’m a puzzle and 36 minutes isn’t the longest to work someone out.”

The 25-year-old Londoner is very respectful of what the 39-2 (26 KOs) defending champion does well.

“He’s very, very solid, you don’t break down a fighter like Moruti, he’s going to be there from the first to the last round,” said Edwards. “He’s got a very heavy jab, we’ve seen that when he knocked out [former two-weight world champion Zolani] Tete.

“He does close the gap down and makes the ring very small as well. He’s got a lot of big points; I do need to take into consideration during my camp and during my fight.”

However, he feels he has several advantages that if he can implement will be key to upsetting the South African and joining his brother Charlie, who held the WBC 112-pound title previously.

“The things I do have over him are speed, agility, I’ve got youth on my side,” said Edwards, who is 13-years younger than Mthalane. “It’s no secret to what approach I take when entering the ring. I’m quite consistent, you don’t see me changing too much. I’m going to focus on my game and try not to get my head wrapped up in this being my first world title fight.”

Both men know each other and were paid sparring partners for WBA 112-pound titleholder Artem Dalakian in 2018.

“We’ve both seen each other up and personal, we watched each other spar in Ukraine,” he said. “He knows what I bring and my attributes and my strengths. Neither of us are going in completely blind, even though we didn’t share any rounds. You do learn a lot from watching each other.”

Edwards is preparing for the best version of Mthalane and isn’t banking on age and 16 months of inactivity catching up with the defending champion.

“That doesn’t really go through my mind,” he explained. “At the end of the day, I have no idea what sort of effect this period of time will have changed Moruti from the last time he stepped in the ring.

“The last time he stepped in the ring he was a fierce competitor who was cutting straight through flyweights and it’s the reason why he’s arguably one of the most avoided world champions out there.

“I don’t think for a second he’ll have fallen off too much because he’s a consummate professional, he’s always in the gym, he doesn’t blow up in weight, he doesn’t go missing, he lives in the gym.”

Edwards has worked with long-time trainer Grant Smith, at the Steel City Gym. The two have worked together since Edwards’ days in Sheffield University. The two enjoy a close relationship and have been ticking over until they got word of the title fight.

As usual, Edwards, who is known for his lavish ring attire, intends to wear something that will catch the public’s attention, though says he won’t have the much talked-about hairstyle to go with it this time. 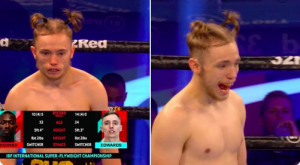 “I can’t be messing about with pigtails when I’m about to get in with a world champion. The barbers are open so I can go and get a haircut, I couldn’t do that last time, we were in lockdown.”

After toiling around the South African scene, he stepped up to win an IBF title eliminator.

He lost to then-IBF titleholder Nonito Donaire (TKO 6) in his first world title attempt in 2008.

Due to the economic situation in his homeland, he was forced to vacate the title in early 2014. He regained it four years later against Muhammad Waseem (UD12).

Mthalane-Edwards, plus undercard action, will be broadcast on ESPN+ in the U.S. and BT Sport in the U.K.