Today is World Intellectual Property Day, and Triller has thoughts on the matter

Triller did well in selling the April 17 Jake Paul v Ben Askren event, which unfolded in Atlanta, Georgia, and featured a mix of music, cussing, reefer references and knockouts which was enjoyed by millions of people.

The tech platform turned fight game disruption vessel sold more than a million PPVs, at $50 apiece, but that number would have been who knows how much bigger, the company maintains, if not for entities taking the feed, and putting it on the internet, for free.

In response, Triller Fight Club filed a lawsuit in U.S. District Court of Central California on Friday and the paperwork entered into the system indicates TFC seeks $100 million in damages from groups named as signal thieves/disseminators.

“It’s shocking to think a theft so grand can be done so blatantly and brazenly and with no remorse,” said Ryan Kavanaugh, the co-controlling shareholder in a release that went out on Monday afternoon. 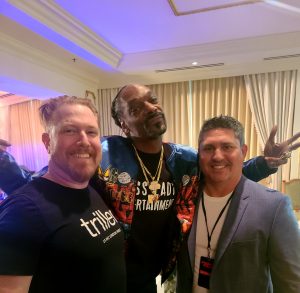 “There is zero difference between what they did and walking into a market stealing tons of a product and selling it at a discount in the parking lot. It’s neither civilly nor criminally any different, and we are prosecuting to the fullest extent of the law. There were more than two million illegal streams, akin to hundreds of millions of dollars. Sites, mostly using Google’s YouTube, such as FILMDAILY.COM, ACCESSTVPRO.CO, enONLINE2LIVESTREAM.US, CRACKSTREAMSLIVE.COM, SPORTS-TODAY.CLUB, MY-SPORTS.CLUB, BILASPORT.COM, TRENDY CLIPS, MIKE, YOUR EXTRA, ECLIPT GAMING, ITSLILBRANDON, and others are causing significant damage not just to Triller Fight Club but content creators overall,” he continued.

A quick scan showed that FilmDaily.com looks to be dormant, with a sign posted alerting visitors that the domain name is for sale. Also, an attempt to see what’s going on at Crackstreamslive.com summoned an alert that “the server cannot be found.” A person named in the suit, named in the filing as “Mike,” is not, for the record, me.

The court doc indicates Triller is positing that more than 2 million unique viewers were not included in viewing tallies.

Kavanaugh finds himself on the same page, it seems, as Dana White. Those two have jousted a bit in the recent past. The face of the UFC from the management side took a public stand versus piracy on Jan. 5, when he Tweeted out a response to a commenter who said they’d be excited to steal the feed for the upcoming Conor McGregor-Dustin Poirier faceoff on Jan. 23. He even said he had his people watching one particularly egregious stream pirate.

“People put a lot of hard work, time and money into creating a product for the consumer, and having it stolen and resold is terribly damaging,” Kavanaugh said in the release. “The good news is they are not protected by VPN masking or other firewalls as their activities are criminal and grand theft, so we will ultimately find them and prevail not just for us but for content creators in general.”

One neat flourish regarding the suit: the day the suit got press, April 26, was designated as World Intellectual Property Day by President Joseph Biden.