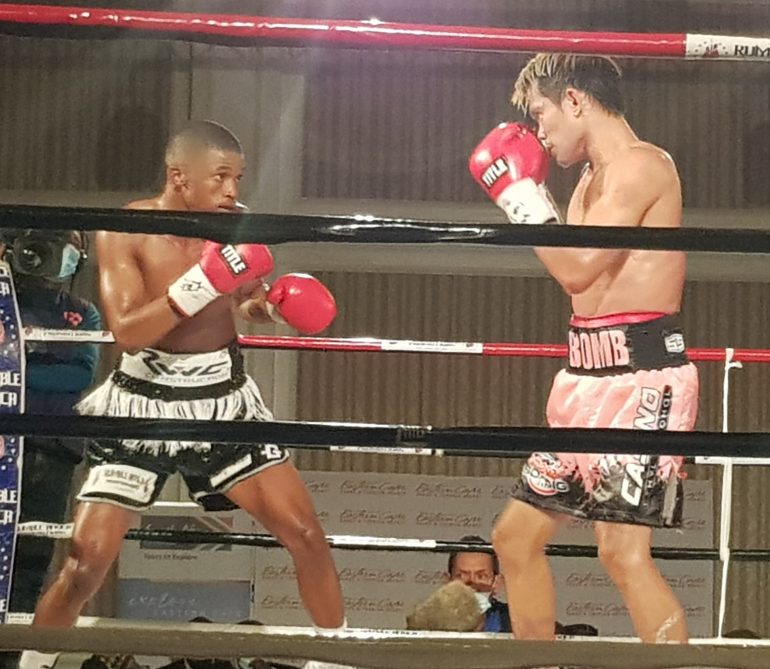 Sive Nontshinga came into his fight with Christian Araneta with a reputation as a puncher but he proved that he could box a disciplined fight and go 12 rounds when he needs to.

Nontshinga stuck to a clear game plan and won a unanimous decision at the Boardwalk Hotel and Casino in Gqeberha, South Africa. Two of the scorecards read 114-113 and a third card of 115-112.

Nontshinga started the first round by moving to his left, away from southpaw Araneta’s big bomb, the left uppercut, a punch that delivered several one punch knockouts to the Filipino fighter, both early and late in fights. When he landed a straight right that made Araneta stumble ever so slightly, it was clear that he also had something for Araneta.

Nontshinga snapped Araneta’s head back with a left hook in the fourth round, who for his part managed to land a straight left to the body but little else.

Araneta came to win and came charging out of his corner in the sixth, throwing caution to the wind. He landed some good combinations to the body. Nontshinga replied with a right hook to the body followed by another right hook to the head to stop Araneta’s charge, but the Filipino landed a hard straight left at the end of the round.

In the ninth, Nonsthinga landed some good rights while Araneta hung back on the ropes and corners, no doubt trying to lure Nontshinga into his left uppercut but the South African clearly did his homework and would have none of it, continuing to pot shot from a distance. Araneta let rip with another flurry just before the bell but mostly punched air as Nontshinga got out of the way. The boxing clinic continued into the next stanza but Araneta had no quit in him.

He once again came out firing on all cylinders in the tenth, clearly trying for the knockout. Aranetta landed some good combinations to the body as well as a hard left but by the eleventh, Nontshinga was back to circling and jabbing from the outside.

Just as it seemed that he was heading towards a comfortable decision win, Araneta finally found lightning in a bottle in the last round when a straight left caught Nontshinga flush on his chin and put him on the seat of his pants. He was up and clear-eyed, but the tension was high at ringside as Araneta came storming in. Nontshinga had the presence of mind to hold his opponent to catch his composure and then he proceeded to get back on his bicycle, using his superior footwork to chew up the clock.

Is Sivenathi Nontshinga, who now moves to 10-0 with nine knockouts, having gone the distance for the first time, indeed “The Special One” as his nickname suggest?

Yes, he is rather special in terms of being able to adjust and stick to a strategy. He has heart, power, and a good set of feet but we will have to see just how special he is when he gets his shot at IBF champion, Felix Alvarado.

Christian Araneta, who drops to 19-2 with 14 knockouts can come again. His fights will never be boring.

The main supporting bout saw junior bantamweight, Yanga “Showtime” Sigqibo win a unanimous twelve round decision over another hard charging Filipino, Jerald Paclar. Sigqibo takes his record to 15-1-1 with four knockouts while Paclar drops to 15-5-3 with 8 knockouts. The scores were 116-113 and 116-112, twice.

It was a rather scrappy, pedestrian affair that left one wanting to see something more from both fighters. More offensive output from Sigqibo and a bit more variation from Paclar.

The tall, lanky Sigqibo stuck almost exclusively to the outside, spearing Paclar with his pesky jab, while the Filipino kept charging forward, throwing haymakers, mostly to the body.

Sigqibo looked to be finding the range in the second, landing a nice uppercut but in the third, a right hook to the body by Paclar landed behind the waist of Sigqibo who turned his body in a sideways stance to avoid the Flipino’s bull-like rushes. Sigqibo took a knee and referee Sipho Ndongeni ruled it a kidney punch and gave Sigqibo time to recover.

When the fight resumed, Paclar kept winging in power shots to the body and head of Sigqibo. Most did not land, but there were times that Sigqibo seemed bothered by the Filipino’s punches.

The fight maintained the same pattern throughout. Paclar was the aggressor but was mostly ineffective, landing some body shots, the occasional head shot but also hitting lots of air as Sigqibo could see most of it coming and side stepped the Filipino’s attacks. There was another kidney punch incident in the eighth, which once again, bought Sigqibo some time, but Paclar lacked the finesse to disguise his punches enough to land something fight-altering.

Sigqibo’s offense was mostly limited to a steady stream of jabs and a very occasional uppercut, leaving the judges with some hard to score rounds. In the end they preferred the consistency of the South African’s jab over the rough stuff from the Filipino. Sigqbo performed much better in his previous outing, but to be fair, the awkward pressure of Paclar also had something to do with it.

As expected, the South African flyweight title fight between veteran 35-year-old champion, Jackson “M3” Chauke and young upstart, Luyanda “Pretty Boy” Ntwanambi, stole the show, Chauke winning a majority 12 round decision by scores of 116-111, 115-112 and a third card who had it even at 114-114.

Ntwanambi boxed beautifully for the first four rounds behind an accurate jab, side stepping any advances from Chauke and clipping him with a well-timed straight right. Whenever Chauke tried to let his hands go, Ntwanambi dropped his level and made him punch air and even retaliated by jumping in with a right uppercut-left hook combination, then getting back out again.

You got the sense that Chauke was clawing his way back into the fight in the fifth round when he pounded the body of Ntwanambi with short punches on the inside. Ntwanambi, whose jab started dropping off, retaliated with some shoe-shine combinations but missed some big shots toward the end of the round.

In the sixth Chauke sent the spray flying from Ntwanambi’s head with a huge left hook. Ntwanambi got back to boxing on the fly but Chauke started to trap him on the ropes more often, landing two more left hooks through the round. Ntwanambi kept fighting back but one got the sense that the fight was turning in Chauke’s favor.

Towards the end of the eighth all hell broke loose as Chauke landed a right to the tip of Ntwanambi’s chin which hurt him badly. To his credit, he hung on for dear life but had to eat another right before somehow surviving to hear the bell.

Ntwanambi got back on track in the ninth, moving and using his speed to land fast, albeit light punches as Chauke struggled to pin him down but in the tenth Chauke hurt him again with a series of rights and a left hook. Ntwanambi doggedly fought back which was just enough to make it out of the round and avert a stoppage.

In the last two rounds, Ntwanambi tried to stick and move with Chauke in pursuit. Ntwanambi did not have any snap left in his shots, and it was Chauke who appeared to stagger him in the final seconds of the fight, forcing him to hold.

Chauke improves to 20-1-1 with 14 stoppages and Ntwanambi, suffering his first defeat, drops to 7-1-1 with four knockouts. Hopefully, there will be something big in Chauke’s future. As for Ntwanambi, he acquitted himself well and if he can learn from this experience, it could well be a “good” loss.

Both fighters were given a bonus check of ZAR 5000 for “Fight of the Night” by sponsor, Old Buck Gin.

Top featherweight, Lerato “Lights Out” Dlamini, marked time while waiting for a title shot, pounding out a ten round unanimous decision over Hassan Milanzi of Zimbabwe, bringing his record to 15-1 with seven knockouts. Milanzi suffered his first defeat dropping to 9-0-1 but he had never faced anyone close to the caliber of Dlamini. Milanzi moved when he could and doggedly kept punching back while the South African pounded him with every punch in the book, Dlamini maintaining an impressive work rate throughout the fight. In the end, Milanzi had nothing but conditioning and courage to offer and the scores of 100-90, 99-91 and 98-92 told the story of the fight.

The junior featherweight bout between Ayabonga Sonjica and Theophilus Tetteh of Ghana had to be scrapped when Tetteh failed a pre-fight blood test and was deemed unfit to compete.

The card was presented by Teris Ntutu and Nomfesane Nyathela of Rumble Africa Promotions.