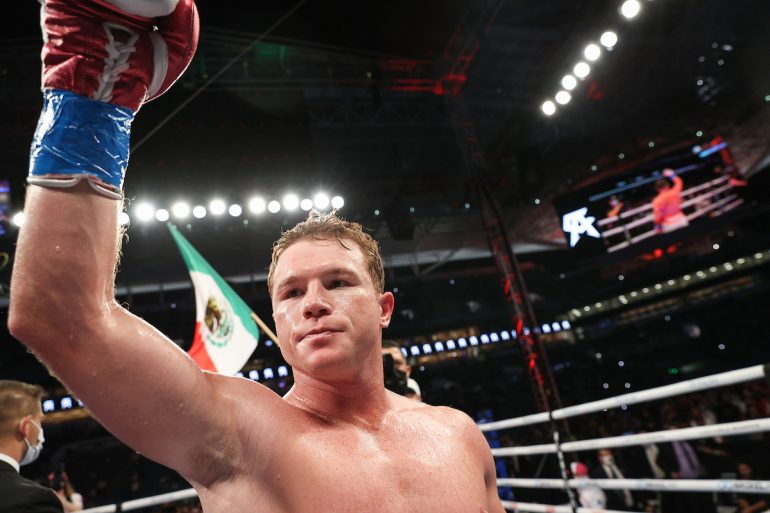 It’s another sign that the world is returning to normal with the megafight between Mexican superstar Canelo Alvarez and British star Billy Joe Saunders fast approaching on May 8, in Arlington, Texas, at AT&T Stadium, home of the Dallas Cowboys.

Matchroom chairman Eddie Hearn has said over 60,000 tickets have already been sold for the live worldwide event being shown on DAZN (not Mexico).

This is another step for Alvarez (55-1-2, 37 knockouts) to unify his WBC, WBA Super and Ring Magazine super middleweight titles by taking away another belt, the WBO strap owned by the undefeated Saunders (30-0, 14 KOs).

On Wednesday, the two fighters spoke about the upcoming fight in a taped DAZN e-conference hosted by Hearn.

“It would mean the absolute world to me, in boxing, like I say, I started boxing when I was five years old and to get to this stage in my career this is the pinnacle of the pinnacle of the mountain; it would mean everything,” said Saunders, a two-division titlist. “This fight will always be about legacy, because of what’s on the line.

“My history is already written in my head. I just have to follow the script. In training camp, it’s not been military. We’re still enjoying ourselves. I understand none of this event is a joke. Canelo has been on my radar ever since I turned pro. Now is my time to show him.”

Saunders said he thinks movement is a key, but admits he doesn’t know what to expect from Alvarez’s power.

“He is the most devastating puncher on the planet, and he’s the most fearsome man on the planet, so we’ll how the bell goes,” Saunders said. “I respect every fighter that gets in the ring. I respect (Canelo) as a fighter, but that’s as far as it gets for anyone.”

When asked what he has to do to create one of the biggest upsets in British boxing history, Saunders replied, “by being Billy Joe Saunders.”

Saunders would be the second part towards Alvarez’s dream of being the undisputed super middleweight champion, with a fight against IBF 168-pound titlist Caleb Plant projected to take place this fall.

“It’s really important for us to make history,” Canelo said. “And these fights are very important toward what we want to achieve in boxing. I’m very happy to be on this path and training 100 % to reach our goals.

“I know what Billy Joe Saunders brings. He’s a fast fighter who moves a lot. He’s a lefty, a difficult opponent. But at this level, I have to adapt to any style. I feel like I’m in my prime and I obviously really wanted to fight after 13 months without a fight.”

Alvarez has no trouble saying, “I’m going to win, without a doubt. I’m going to win. I come to make history and that’s the only thing going through my head.”