Does Edgar Berlanga have what it takes to reach mega-superstardom? 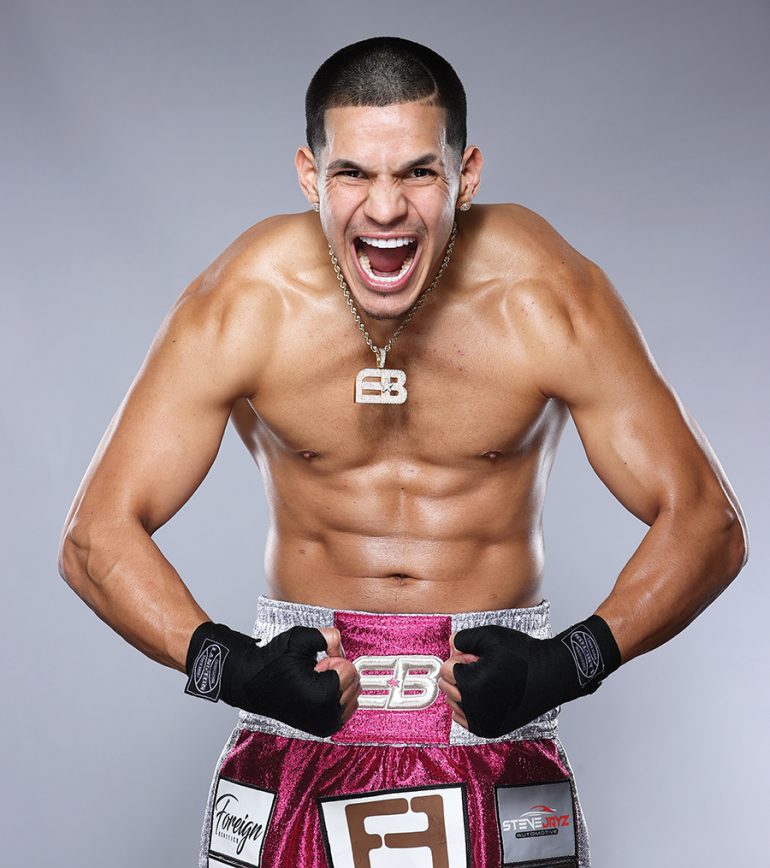 Red-hot super middleweight Edgar Berlanga does not just have superstardom on his mind but “mega-superstardom.”

So too is continuing to rack up more eye-catching knockouts, eventually headlining at New York’s Madison Square Garden on the weekend of the annual Puerto Rican Day Parade, in June, and big-time money fights against David Benavidez and, of course, Canelo Alvarez.

It’s hard to blame Berlanga for letting his imagination run free because if the 23-year-old Puerto Rican from Brooklyn continues on his current trajectory, each of those hopes and dreams are within grasp.

“My gut feeling is that he is going to be a massive superstar. That’s my gut feeling,” Top Rank promoter Bob Arum, who has been building superstar fighters for more than 50 years, told The Ring.

First, however, Berlanga needs to continue climbing the ladder as he makes the transition from prospect to contender, beginning with Demond Nicholson in the “Top Rank Boxing on ESPN” co-feature, on Saturday (ESPN, ESPN Deportes and ESPN+, 10 p.m. ET), at Silver Spurs Arena in Kissimmee, Florida, a Puerto Rican hotbed, where the 3,500 available seats sold out long ago.

Although Berlanga’s fight with Nicholson is scheduled for eight rounds – as have been his previous seven bouts – he hasn’t needed many of them. Berlanga (16-0, 16 KOs) has caught the attention of so many because he has won each of his fights by first round knockout.

He has yet to return to the corner to sit down on his stool. Yet to take a swig of water or have his face wiped off. Trainer Andre Rozier has yet to climb to the steps to offer any instruction. Many of the knockouts have been brutal, with a right hand that seems to vaporize opponents in the highlights leading “SportsCenter.”

Berlanga’s pure power, friendly and playful demeanor and a Puerto Rican fan base looking for its next star make him ripe for big things. He knows all eyes are on him but he has so far resisted getting too caught up in the hoopla.

“I don’t get big-headed. We got one goal and that’s to win the world championship,” Berlanga told The Ring. “I just need to get to that point where I become a superstar. When I become a superstar and I win a title, then everything will go from there. But I am just keeping my head down and [will] continue to work hard.”

The first round knockout streak is nice but “The Chosen One” said it is not going to make or break him.

“I train to go 12 rounds. As far as the first round knockouts, everybody knows I hit extremely hard,” he said. “There’s nothing really to prove no more that I could knock somebody out in the first round. If I get another first round knockout, everybody will be like, ‘What the f—? This kid is on steroids.’ More people will reach out to me, bigger names. I’ll probably go on one of those talk shows in Hollywood. But I don’t give a f—.”

Then Berlanga turned his attention to Nicholson (23-3-1, 20 KOs), 28, of Laurel, Maryland, who does represent a step up in competition. He has won five fights in a row since a seventh round stoppage loss to former world title challenger Jesse Hart in his most recent defeat, in 2018. He also lost an eight-round split decision in 2017 to Gennadiy Golovkin victim Steve Rolls and suffered a sixth round stoppage in 2014.

“Listen, I know I’m gonna get that mother f—– out of there on [Saturday]. He’s not coming out of there alive,” Berlanga said. “For damn sure, I’m making sure something happens that night. I just got to stay focused and follow the game plan. Whether he goes out in the first round or second or third, I know he’s going out for sure. I’m not picking a round but I know he’s going out. That’s just that.

“He looks like a durable guy. He has experience, so we will just see on [Saturday]. I’m just working extremely hard like I always do. I don’t take no opponent lightly.”

Arum said there is no use trying to hold Berlanga back for the purposes of development and gaining more experience.

If Berlanga wins Saturday, he is due back on June 12 in his first scheduled 10-rounder on a Shakur Stevenson undercard, with the plan to step him up into a much more serious fight. 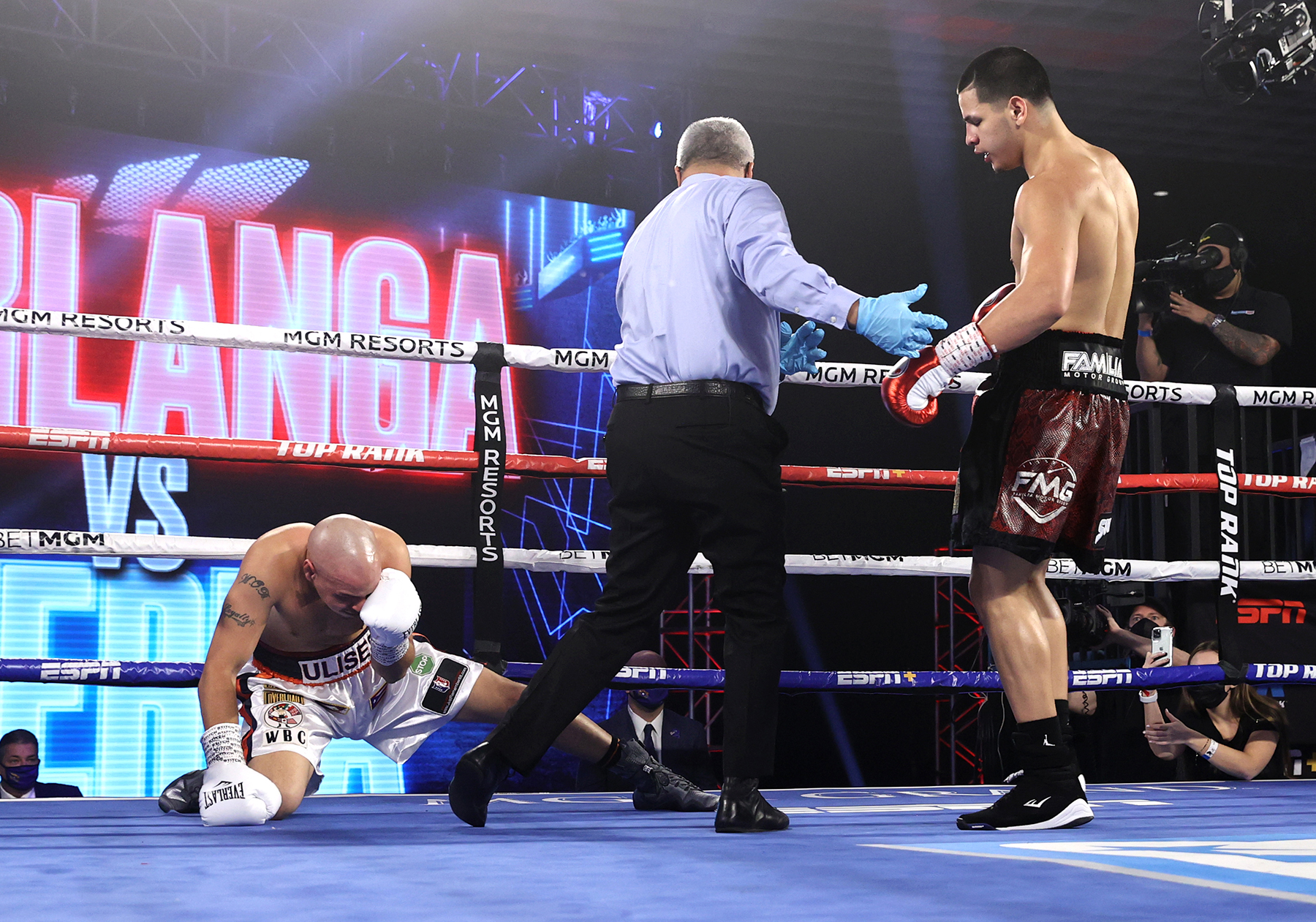 “We’re talking to them about a real good step up with, say, a Jesse Hart. That’s a thought in the matchmakers’ mind,” Arum said of Top Rank matchmakers Brad Goodman and Bruce Trampler.

Berlanga may only have fewer than 16 full rounds as a pro; however he has not only caught the attention of fight fans but also some of the world’s best super middleweights. The Ring champion Canelo Alvarez, 30, of Mexico, has mentioned his name and is quite aware of him. Former two-time titleholder David Benavidez, 24, of Phoenix, has gone so far as to say he wants to fight him ASAP.

Before Benavidez’s most recent fight, an 11th round stoppage of Ronald Ellis, on March 13, he spoke about just how big of a fight he thought one with Berlanga could be.

“We’re very close in age. That’s a big fight people want to see,” Benavidez said. “Definitely has a lot of buzz and would be a lot of excitement for it and we have a lot of knockouts. There’s the Puerto Rican-Mexican rivalry. I feel like that would be a great fight.

“I’d definitely be willing to fight him. I don’t know if they want to give him a couple of fights to get him ready but it’s a fight I’d like to make happen.”

Berlanga has heard Benavidez call him out and agrees it could be a blockbuster.

“It’s an amazing feeling. I’m blessed to be where I’m at and have a [former] world champion like himself calling me out,” Berlanga said. “I’m willing to make the fight happen. Obviously he sees a lot of money being made in that fight. We could really sell out a big arena. We could fight in Vegas; we could fight in New York and just sell out the arena, man, with a whole bunch of Mexican and Puerto Rican fans. I know what he sees there. He sees something like I see with me and Canelo.

“I’m on the verge of becoming a mega-superstar in boxing, so for the Mexican-Puerto Rican rivalry, whether it’s him for Canelo, it’s just money signs. There’s a lot of money to be made and I know that’s what he sees. I’m young; there’s a big buzz [about me] going on right now. He’s young. I’m a power hitter. He’s a power hitter. He’s big and I’m big for 168, so there’s a lot of good things that can happen.”

Berlanga and Benavidez have never met and “know” each other only through social media, where things have been cordial. 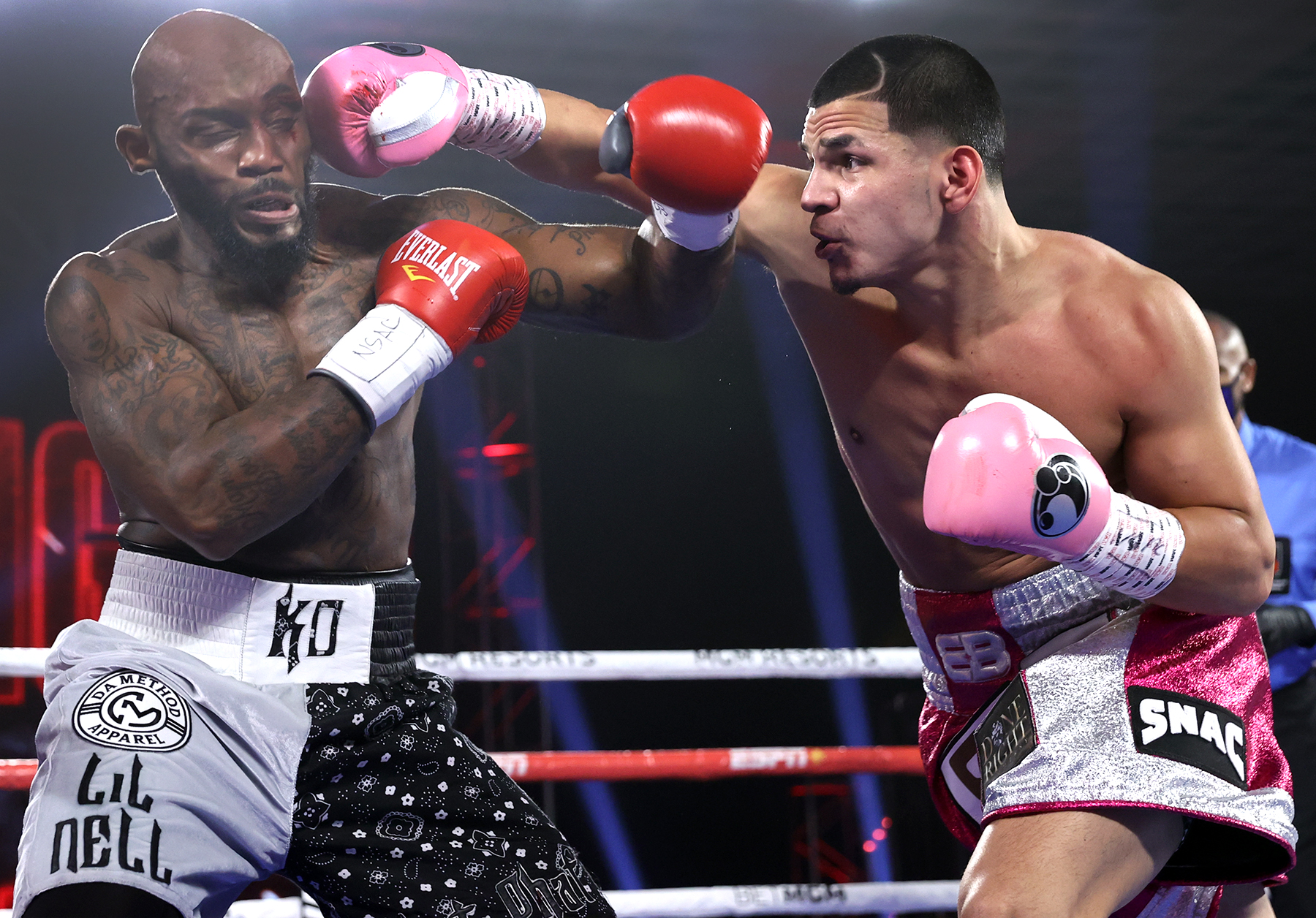 “If he gets disrespectful, then I’m gonna get disrespectful. I just go based off another man’s energy,” Berlanga said. “You know, I’m a humble monster. If he gets out of hand and starts talking sh– and wants to amp things up, I’m willing to do the same. He’s a good fighter and he’s tough. He’s got a good jab and he’s in shape and he throws a lot of punches, a lot of combinations. I just feel like he’s never been hit like I hit. I know I got a chin on me too and I hit devastatingly hard. It would draw a lot of people and I know for a fact that would be a big fight.

“Even if I were to take a fight with him in December, that sh– would be crazy. We’d sell out an arena, easy.”

Arum also sees the potential for huge fights between Berlanga and Alvarez or Benavidez.

“One hundred percent,” he said. “Canelo is the biggest attraction in boxing now. Canelo and Berlanga, with Berlanga getting a couple of real significant victories under his belt, is probably the most massive fight in boxing next to the heavyweights [Tyson Fury and Anthony Joshua].

Benavidez is not like Canelo but that’s also big.

“I really believe that if all things fall into place, a Berlanga-Canelo fight would be this generation’s [Manny] Pacquiao-[Floyd] Mayweather. It definitely will be. It matches fighters who would be supported by two of the most major groups in the sport – the Mexicans and Mexican-Americans and Puerto Ricans.”

Berlanga likely won’t get fights of that caliber just yet. He knows there is still more work to be done but he’s also not crazy believing those fights are realistic if he keeps winning. But the way Berlanga sees it, he has gotten this far listening to manager Keith Connolly and allowing him to work with Top Rank to map out his career.

“Keith has a plan he’s doing right now and he wants me to follow it, so that’s exactly what I’m gonna do,” Berlanga said. “Sometimes I say, ‘Keith, fu– it; I want to fight Canelo in December!’ He’s like, ‘Nah, man; let’s chill. Let’s keep winning; let’s keep stacking up knockouts and keep building your brand and keep building yourself.’ I say the same thing but sometimes I get anxious. I want a title.

“Keith wants to take his time, my dad too, so I’m just gonna follow the game plan. Top Rank is moving me good. They’re the best in the business building superstars. I’m never gonna doubt them on that. They’ve done it numerous times. They did it with Floyd Mayweather; they did it with Pacquiao, [Miguel] Cotto, [Oscar] De La Hoya and the list goes on.”

The way Berlanga and Arum see it, his name is the next to add to that list.