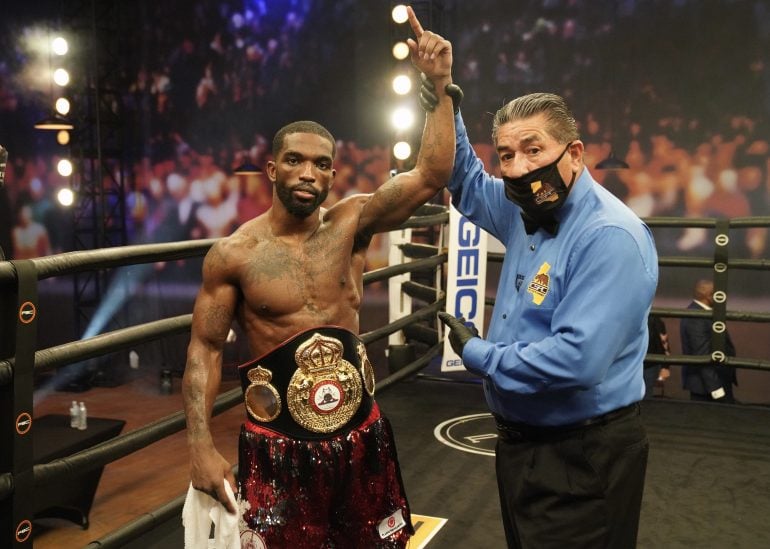 Every time Jerry Perez tried throwing a jab, he welcomed two back. Each time he reached out with a right hand, a left flew back and with it his head. When Perez leaned forward, he was greeted by something underneath him.

Southpaw Frank “The Ghost” Martin (13-0, 10 knockouts) had an answer for everything Tuesday night against Perez in a 10-round lightweight battle on FS1’s PBC Fight Night show from Shrine Expo Hall, in Los Angeles, California.

Martin stretched his knockout streak to four-straight by stopping Perez (13-1, 10 KOs) at 2:59 of the seventh round, forcing everyone at 135 to take notice.

With :17 left in the fifth, Martin manhandled Perez, grabbing him and throwing him into a corner. Martin, who is trained by Derrick James, felt in control through the first five rounds. During the course of that round, Martin and Perez engaged in a staring contest. Martin had enough and tagged Perez with a hard left.

Early in the sixth, it was quite evident Martin was connecting more, having outlanded Perez 71-37 in total punched landed with 2:26 left in the round. Body shots more that out and were creating on toll on Perez. Martin had connected on 34 punches to the body, where Perez landed a mere 8. In the third and fourth rounds, Martin landed a total of 7 body shots in each round. 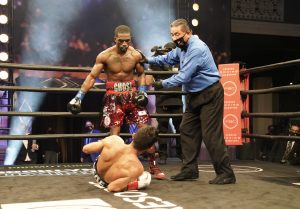 Referee Jerry Cantu reached the count of 9 and at 2:59 of the seventh, Cantu saw enough and wisely waived it over with Perez taking a barrage of shots in the corner.

“I felt good in there,” Martin said. “I just followed the game plan that Derrick James gave me. He told me to go out there and use my feet. I hurt him at every step of the fight. Everything Derrick asked me to do was working.

“I saw the shot coming the round before. I was going to the left looking for it, but I couldn’t find the right distance. In the next round Derrick told me he was leaning and that helped me find the distance to land it.

“He was physically strong but there wasn’t anything he did that affected me. This win is a big blessing. I’m just going to stay humble and keep moving forward and getting better.”

Mexican middleweight Jose Resendiz (12-0, 8 KOs) was fighting for the first time in the U.S. and he gave fight fans a glimpse of what they were missing in eight rounds against Quilisto Madera (12-3, 8 KOs).

“My team and I knew this was going to be a tough opponent and we prepared hard for this fight and all the fights that are coming for me,” Resendiz said. “I want to keep building up to harder fights and eventually face the world champions at middleweight and super middleweight.” 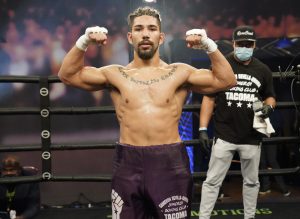 Super middleweight Cameron Rivera (9-6-3, 6 KOs) won a six-round unanimous decision, sending Burley Brooks (6-2, 5 KOs) down for the second-straight time. Brooks didn’t help himself very much. He nailed Rivera below the belt three times, when finally referee Thomas Taylor rightfully deducted a point from Brooks in the sixth round. 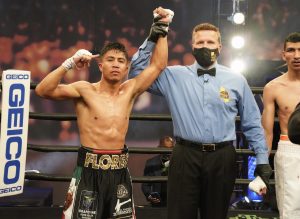 Ezequiel Flores got up from a second-round knockdown to edge out Juan Muro Jr. (Photo by Sean Michael Ham-TGB Promotions).

That proved to be the difference on the scorecards of Robert Hoyle (57-56) and Fernando Villarreal (57-56). Judge Eddie Hernandez Sr. (58-55) gave Rivera a little more cushion.

What was revealing was right after the scores were read and Rivera’s hand was raised, he wore a look of almost surprise that he had won. Brooks, who is managed by Errol Spence Jr., lost for the second time to low blows. In his previous setback, Brooks had two points deducted for low blows. 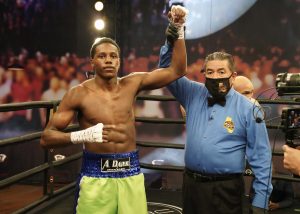 In the only fight off TV, and his first fight since being stopped by Jean Pascal in 2019, former light heavyweight titlist Marcus Browne (24-1, 16 KOs) went the 10-round distance in winning by decision over 38-year-old Denis Grachev (20-13-1, 11 KOs). The durable Russian was 1-5 in his previous six fights.

In the pro debut of two junior featherweights,

Junior middleweight Travon Marshall made a splashing pro debut by stopping Christian Marron (0-2) at :33 of the first round with a right uppercut to the body.