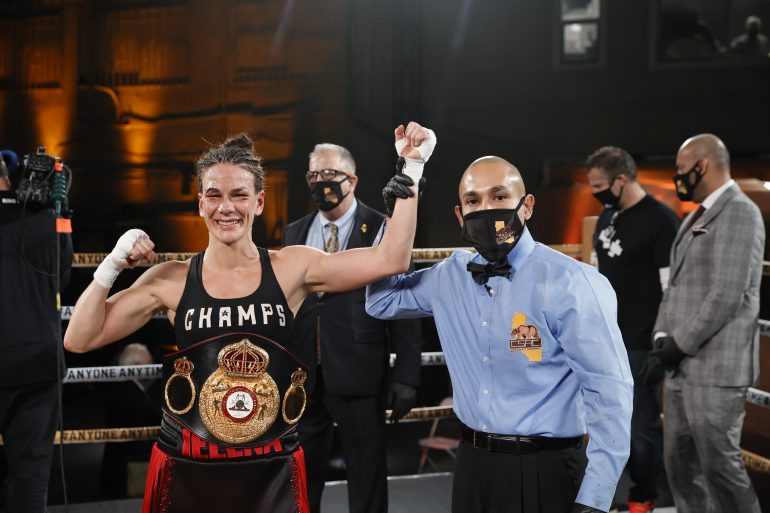 The clash between Mrdjenovich and Cruz was elevated to main event status after the heavyweight bout between unbeaten Stephen Shaw and Jermaine Franklin was postponed after Franklin tested positive for COVID-19.

The 38-year-old suffered her last defeat to Edith Matthysse in August 2015, but avenged the loss to the Argentine fighter over seven months later, winning the WBA title in the process. Mrdjenovich has since gone unbeaten in her next six fights.

Mrdjenovich is on a collision course with WBC/WBO titleholder Amanda Serrano, who stopped Daniela Bermudez on March 25 in San Juan, Puerto Rico. Serrano and Mrdjenovich, who resides in Edmonton, Canada, are ranked No. 1 and 2 at featherweight, respectively, by The Ring.

Cruz (12-1, 3 KOs) defeated Leticia Uribe by unanimous decision in her last bout on February 20. Cruz scored a knockdown in Round 6 in the one-sided victory. The 30-year-old has not lost since her second pro fight, which was by majority decision to Alondra Gonzalez Flores in June 2016.

In the co-feature, junior welterweight prospect Juan Pablo Romero will square off against Deiner Berrio (22-2-1, 13 KOs) of Colombia in a 10-round bout.

Romero (13-0, 9 KOs) was scheduled to face unbeaten Jonathan Navarro in an intriguing clash of unbeaten fighters, but Navarro reportedly pulled out of the fight with an undisclosed injury. Romero, who is promoted by Promociones del Pueblo, will be making his U.S. debut.

Romero notched a lopsided-decision victory over Sergio Torres in his last bout on November 28 in Mexico City, not far from his hometown of Villa del Carbon. The victory over Torres snapped a string of four consecutive knockout victories.

Berrio, who resides in Santiago de Tolu, Colombia, has won his last two bouts by knockout after back-to-back decision losses to Pavel Malikov and Zaur Abdullaev.

In the opening bout of the NBC Sports Network telecast, welterweight prospect Bobirzhan Mominov (12-0, 8 KOs), who is originally from Kazakhstan and now resides in Bermuda Dunes, California, will face Angel Ruiz (16-1, 12 KOs) of Tijuana, Mexico, in an eight-round bout.

Francisco A. Salazar has written for The Ring since October of 2013 and has covered boxing in Southern California and abroad since 2000. Francisco also covers boxing for the Ventura County (Calif.) Star newspaper. He can be reached by email at [email protected] or on Twitter @FsalazarBoxing.