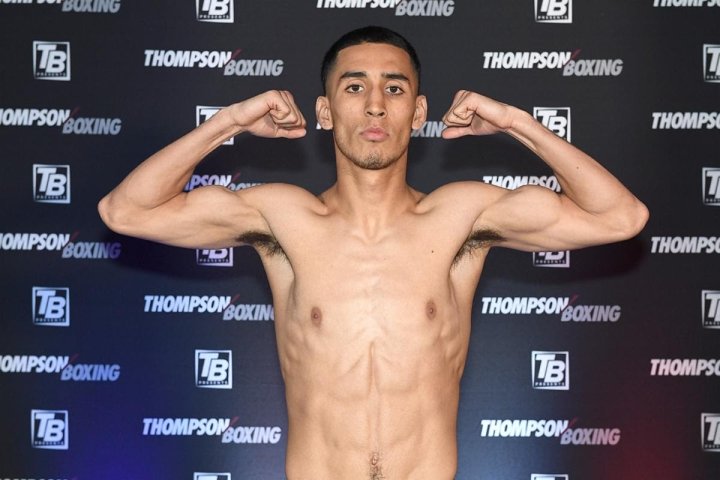 Ruben Torres continues to prove why he is one of the best prospects in boxing.

The 23-year-old junior welterweight dropped Diego Contreras twice en route to a knockout victory Sunday evening at the Omega Products International in Corona, California. The scheduled eight-rounder was the main event of a 3.2.1 Boxing show, promoted by Thompson Boxing.

With the victory, Torres, who resides in Santa Monica, California, improves to 15-0, 12 knockouts.

Contreras entered the fight against Torres having lost two of his previous three bouts.

About 30 seconds into the opening round, Torres dropped Contreras with a counter hook to the head. Contreras was able to beat the count, but was bombarded by a barrage of punches from Torres. A combination by Torres, followed by two punches to the body dropped Contreras again, prompting referee Raul Caiz, Sr. to wave the fight off at 1:04.

“I knew he was a game opponent,” said Torres, who is promoted by Thompson Boxing and trained by Danny Zamora. “I put in a lot of work in for the fight. I wasn’t going to let him do what he wanted to do. I was hoping he would get up so we could get more action in. I’m ready for that next step, which is 10-round fights.”

Junior welterweight prospect Miguel Angel Madueño of Mexico made quick work of Bergman Aguilar, knocking him out at the end of the opening round.

Madueño was making his United States debut Sunday against Aguilar, who was fighting for the first time since November 2019, when he lost by technical decision to Ryan Karl.

The 22-year-old KO artist walked Aguilar down during the opening round, connecting to the head and body with right hands. Towards the end of the round, Aguilar stood and traded with Madueño in the center of the ring. That was likely his downfall as a right hand from Madueño to the stomach dropped him to one knee. Referee Jack Reiss counted him out at 2:59.

Madueño, who now resides in Orange, California, is scheduled to return to action May 28 on the Thompson Boxing/Banner Promotions card in College Station, Texas.

Acosta, who resides in nearby Whittier, was the more-accurate fighter between the two. The taller-Ramirez fought in spurts as Acosta was busier, connecting more with combinations to the head and body.

Ramirez drops to 17-17-1, 14 KOs. The 30-year-old, who is originally from Ciudad Obregon, Mexico and now resides in Phoenix, Arizona, is now winless in his last five bouts.