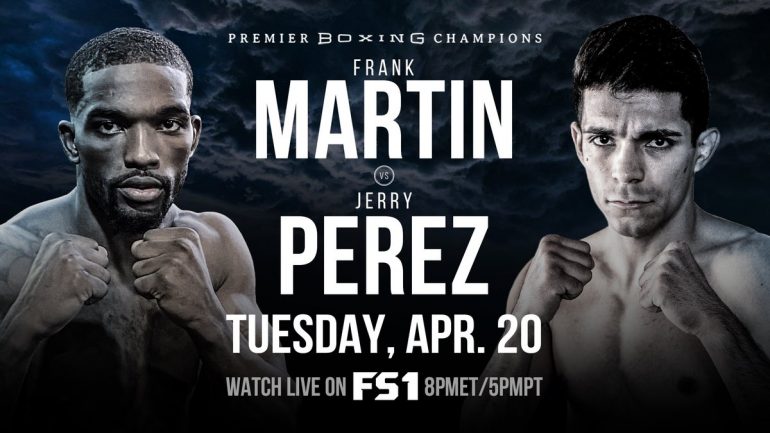 The 10-round bout will take place at the Shrine Exposition Center Hall in Los Angeles and will air live on FS1 (8 p.m. ET/ 5 p.m. PT).

The Perez-Martin fight is a compelling clash of prospects and the winner will take a step forward in a competitive division.

Martin (12-0, 9 knockouts), who resides in Indianapolis, Indiana, last fought on December 5, knocking out Tyrone Luckey in five rounds. The victory over Luckey marked Martin’s third fight against an opponent with a winning record.

The 26-year-old has mostly fought in the Midwest and stopped four of his last five opponents. Tuesday will mark his first fight in Southern California.

Perez (13-0, 10 knockouts), who resides in Oak Hills, California, knocked out fellow prospect Joshua Zuñiga in the third round of his last bout on October 31. The 28-year-old has stopped six of his last seven opponents.

In the co-feature, unbeaten middleweight Jose Resendiz will square off against Quilisto Madera.

Resendiz (11-0, 8 KOs) will be making his U.S. debut after fighting all of his previous bouts in Mexico. He has not fought since January 25 of last year when he stopped Joaquin Murrieta in eight rounds.

The 22-year-old has knocked out his last eight opponents after winning his first three bouts by decision.

Madera (12-2, 8 KOs) defeated Osbaldo Camacho Gonzales by decision in his last bout in May 2019. He has won his last two bouts since losing by knockout to journeyman Jerhed Fenderson in July 2018.