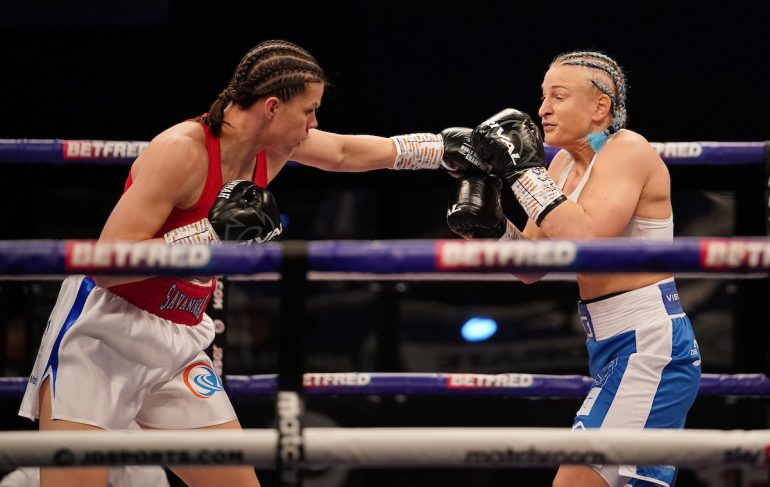 Marshall (left) had too much youth and power for Lindberg. Photo by Dave Thompson/ Matchroom Boxing
10
Apr
by Tris Dixon

WBO middleweight titleholder Savannah Marshall scored the 10th win of her career stopping Sweden’s Maria Lindberg in the first defence of her championship in the third round.

She then said she wanted to fight Claressa Shields, whom she defeated in the amateurs.

“I punch too hard for Claressa Shields and she doesn’t want to know,” said Marshall in her post-fight interview with Sky Sports. “She’d much rather roll around in the Octagon or call out Katie Taylor who’s four weights below her.”

Marshall was relaxed from the get-go against Lindberg, carrying her left hand low and pumping it out with great frequency to keep the 44-year-old in a defensive shell. The visitor was in over her head. Marshall dumped her with a big right hand in Round 2 and then hurt her to the body before the end of the session.

It all seemed inevitable as the third round opened. Lindberg was put down for a second time from another right hand and she sat out the count. She’d taken the fight at short notice, and Marshall moves to 10-0 (8 KOs).

Lindberg, 19-7-2 (10 KOs), had never been stopped but had seen better days and was moving up in weight in her fifth attempt at a world title.