Michael Dutchover: This is the year that I become a contender 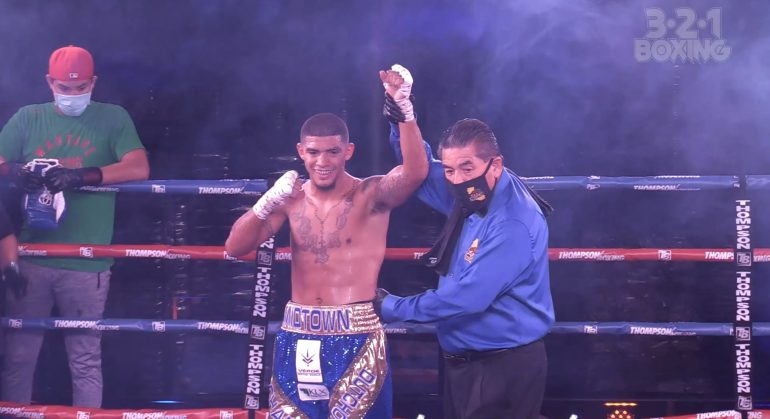 Lightweight prospect Michael Dutchover will face Ivan Leon Benitez on May 28, it was announced on Wednesday.

The 10-round bout will take place at Reed Arena, located on the campus of Texas A&M University, in College Station, Texas, and will stream live on UFC Fight Pass (7 p.m. ET/ 4 p.m. PT).

Dutchover is considered one of the top lightweight prospects in boxing today and is co-promoted by Banner Promotions and Thompson Boxing Promotions.

In his most recent bout on July 26, Dutchover (14-1, 10 knockouts) defeated Jorge Marron Jr. by unanimous decision, in Corona, California. The fight took place over 10 months after Dutchover suffered his only professional defeat at the hands of Thomas Mattice. That fight, which took place in Dutchover’s hometown of Midland, Texas, was stopped in Round 8 after the ringside physician ruled a cut over Dutchover’s eye, which was caused from a punch from Mattice, was too deep to allow the fight to continue.

Dutchover was scheduled to return to the ring on December 20 but had to withdraw due to an injury suffered during training camp. Now living and training in Santa Fe Springs, California, Dutchover believes he can contend in a stacked lightweight division.

“I was supposed to fight in December but I had an injury and things happen for a reason,” said Dutchover, who is trained and managed by Danny Zamora. “I am back in California training and am excited to get back in the ring. There is no place that I would rather fight than in Texas. I will have fans there from Midland and all over the state. This is my fifth year as a professional and this is the year that I become a contender.”

Benitez (14-4-1, 6 KOs) most recently fought on December 8, fighting to a draw against Francisco Lopez Corrales, in Cadena, Mexico. In his previous fight on February 21 of last year, Benitez lost to George Acosta by unanimous decision.

The 20-year-old has been fighting as a pro since November 2015 and is confident he can grind out a win at the expense of Dutchover.

“I will have a difficult task ahead of me in fighting Dutchover but May 28th will be my day,” said Benitez, who resides in Cancun, Mexico.

“I will be prepared to give the fans a great show and beat my opponent. This is what I work for everyday and he will not derail my dreams of becoming a future champion,”

Three prospects will also fight on the card.

In the co-feature, heavyweight Isaac Muñoz Gutierrez (12-0-1, 10 KOs), of Mexico City, will make his United States debut against an opponent to be determined in a 10-round bout. Gutierrez has not fought since September 2019 and has stopped his last six opponents.

MICHAEL DUTCHOVER IS READY TO ERASE A BAD MEMORY THIS SUNDAY