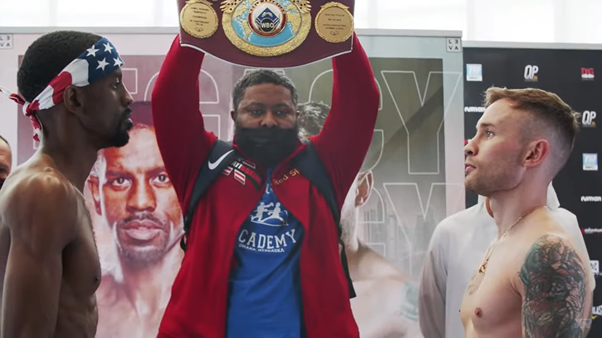 There’s been plenty of respect between these combatants and nothing changed at Friday’s weigh in.

Both WBO junior lightweight titleholder Jamel Herring and challenger Carl Frampton made weight without incident ahead of Saturday’s showdown at The Rotunda at Caesars, Bluewaters, Dubai on Saturday.

The 35-year-old Herring (22-2, 12 knockouts), who is rated No. 5 by The Ring at 130 pounds, looked to be in spectacular fighting shape at 129.4 pounds. The Cincinnati-based New Yorker will be making the third defense of the title he won from Lamont Roach in November 2019.

Frampton (28-2, 16 KOs), 34, seeks to become the first Irishman in boxing history to capture world titles in three weight classes and came in a touch heavier at 129.9 pounds. The Belfast man, who was also in tremendous condition, has won two fights above the featherweight limit, but this will be his first significant test at 130 pounds.

The bout, plus undercard action, will be broadcast by ESPN+ in the U.S. and Channel 5 in the U.K.

CARL FRAMPTON IN THE BRINK OF MAKING HISTORY

JAMEL HERRING: CARL FRAMPTON IS A SKILLED BOXER, I’VE BEEN A FAN