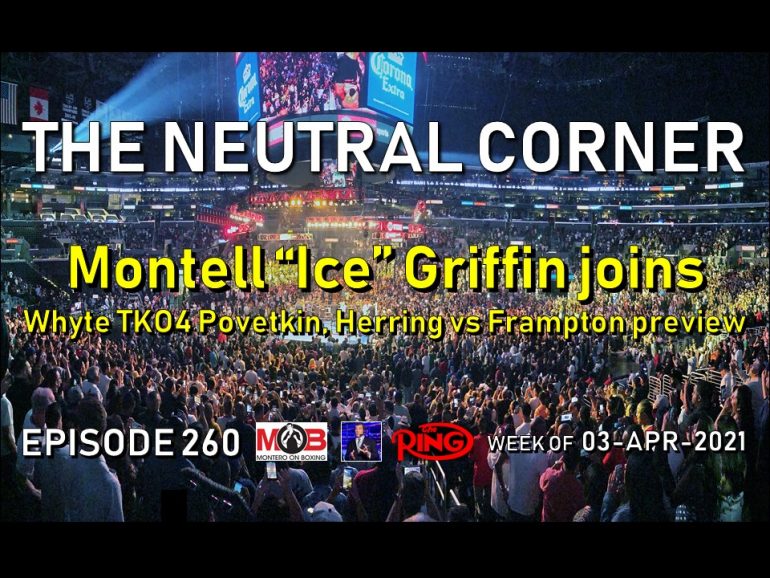 On episode 260 of The Neutral Corner boxing podcast, host Michael Montero was joined by former WBC light heavyweight champion Montell “Ice” Griffin. The Chicago native is the author of a new book called “The Ice Life”, an autobiography about his journey in and out of the ring.

“I started writing it back in 2006,” he told RING, “and just finished it last year. It started from so many people around me telling me that my life was like a book, and that I should write it all down. So, I did. I think the book will show people that you can always get a second chance in life, to never give up. It’s not over until it’s over.”

“And who knows, if it falls in the right hands, maybe we could do a movie about my life as well.”

In 2018, Griffin opened the “Windy City Boxing Club”, named after his father’s former gym that he trained at growing up in Chicago.

“My father bought (former bantamweight champ) Johnny Coulon’s old gym in 1973 and named it the Windy City Boxing Club,” he said. “So, when I was ready to open my own gym a few years ago, I wanted to give it the same name as my father’s old gym.”

On top of writing books and running a gym, Griffin has also partnered with multiple youth organizations in Chicago, including “After School Matters” and “Windy City Boxing Youth Foundation, for several years. The former champ is definitely keeping busy and making a big difference in his community.

On Thursday, March 25, Amanda Serrano stopped Daniela Bermudez in the latest “Ring City USA” headliner in Puerto Rico. Serrano dropped Bermudez for the count with a vicious combination to the body in the ninth round. The Puerto Rican native defended her unified featherweight titles and solidified her position as one of the best pound for pound female fighters in the world.

On Saturday, Dillian Whyte got revenge against Alexander Povetkin. Last August, Whyte had dropped the Russian twice before and looked to be in cruise control when he was suddenly knocked out in the fifth round. In the rematch, which headlined a Matchroom Boxing card from Gibraltar, Whyte controlled the action from the opening bell. A left hook dropped Povetkin in the fourth. The veteran made it to his feet but was in bad shape, prompting referee Victor Loughlin to stop the fight, giving Whyte the TKO4 win.

Hamed doesn’t understand some of the hate that current no.2 RING-rated welterweight Terence Crawford gets on social media.

“In terms of Crawford’s overall resume, some of the criticism on Twitter is a bit over the top,” he said. “Was it Crawford’s fault that Jeff Horn got the decision over Manny Pacquiao? Was it his fault that Lucas Matthysse lost to Victor Postol? He’s being frozen out at welterweight. It’s on record that Danny Garcia turned down an offer to fight him. I think people are being a bit overcritical. But if he doesn’t fight Manny Pacquiao or Shawn Porter next, then he deserves all the criticism.”