55 years ago tonight, Bob Arum did the most challenging promotion of his career 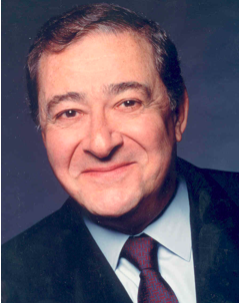 Fifty five years ago, on this night, the most difficult to get off the runway show Bob Arum ever promoted took place, when Muhammad Ali fought George Chuvalo in Toronto, Canada, and “The Greatest” notched his 23rd win, against no defeats, after fifteen rounds.

“This is a tough business, but that first fight, Ali-Chuvalo, it started as Ali-Ernie Terrell in Chicago, ended up as Chuvalo in Toronto, it was by far toughest promotion I’ve ever done,” the 89 year old Nevada resident told RING. “Everything since then has been easier. And I’m grateful for that, because this was like basic training.”

To understand his take on the event, and why it was so challenging, it would be best for you to have been alive and of an age to comprehend the mood of the nation and world at the time. A month and a half before Arum’s first promotion, Ali had caused a massive contretemps when he refused induction into the US armed forces. So, he became public enemy number one, or close to it, as he got labeled “un-patriotic” and such from the mainstream media and the majority of the citizenry.

Arum went shopping for a place that would accept an Ali bout, his third defense of the crown he’d wrested from Sonny Liston. The Liston rematch, then a stoppage of Floyd Patterson, and Terrell got picked as next. But Ali refused to bow to the powers that be in Illinois. So Arum, who had entered into a partnership with footballer Jim Brown and Mike Malitz, the son of closed circuit titan Lester Malitz, and Herbert Muhammad, the son of Nation of Islam leader Elijiah Muhammad, and NOI secretary John Ali, made the rounds in search of a place that would be open to taking some heat for hosting the fight featuring the now nuclear Ali.

“Getting thrown out of the place for the fight, thrown out of country, no landing place, then we were thrown out of Montreal,” Arum recalled. “They’d intimidated the mayor of Montreal, they were hosting The World’s Fair, so we ended up in Toronto. The guy who made it happen was Harold Ballard, who co-owned the NHL Maple Leafs. Conn Smythe (owner of the Leafs since 1927, then sold most of his shares to son Stafford, John Bassett and Ballard in 1961) didn’t want that so-called draft doger, so Harold had to raise money from bankers in Canada to buy Smythe out of the team and the league.” 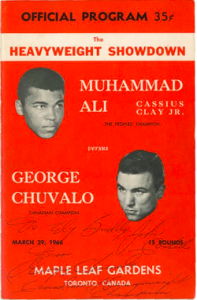 Ballard died in 1986 but is still remembered in those parts as a capital C character. He booked the Beatles for two shows in September of 1964 in his building. Word is he turned off the air, turned up the heat, told the concessionaires to only sell large cups, and made big loot off sodas that day. Arum might have picked up something from Ballard along the way….

But there were more hurdles for Arum–the pols in Ontario would vote on the matter. 107 seat-holders in their parliament debated and pondered..and it wasn’t looking good.

But Irving Ungerman came to the rescue, with turkeys. Known as the “Chicken King” in Toronto because his Royce Dupont Poultry company did so well, he also managed Chuvalo. And he knew that minds could be changed through stomaches, apparently. “He sent all the parliament turkeys,” Arum said. And the birds did the job, because the vote passed, to allow Ali in, by a single vote.

You get a better sense now of the risk that Arum took on in heading up this Ali promotion when you read how Sports Illustrated saw the thing: “The bout will take place before some 17,500 spectators in Toronto’s Maple Leaf Gardens and possibly not many more in the few theaters in the U.S. foolhardy—or courageous—enough to sign up with Main Bout, Inc., the theater-TV promoter that includes Black Muslims. All in all, Muhammad and the Muslims stand to make no more than cigarette money out of the fiasco—which should be sufficient, since Muslims do not smoke.” Yes, you read right, they were calling him “Cassius Clay,” refusing to honor his choice to change his birth name.

Ali, though, just plain soldiered on. “All these people so mad at me,” he told SI. “Can’t even fight in my country. People here in Miami Beach, they can’t even see the fight. They all hate me..One thing I ain’t is a Uncle Tom. I’m a warrior. I’m a warrior on the Battleground of Freedom.”

More lessons were learned by Arum. One came courtesy of Harold Conrad, a journalist/promoter/publicist who like Arum came from Brooklyn and was comfortable in the company of rogues, lovable and those less so. “In those days, promotions took a big suite in the hotel, not the biggest, but big. So in Toronto we set up a card tables, and there were tremendous poker games. Not big money. But on the first night, I was ahead $120, playing against some writers, big money in those days, and I was bragging. My PR guy Harold Conrad gives it to me. ‘You’re supposed to lose to them,’ he said.

Arum took in that message, knowing immediately it was unopposable common sense.

“The thing I remember most about Harold, he introduced me to pot,” Arum said.

“It was ’67. We went to Germany, went to sign Karl Mildenburger (who fought Ali on Sept. 10, 1966). We landed in Frankfurt, and there was a book fair there, the hotel had no rooms. So we were told about a spa, in Bad Soden, about an hour away. The car takes us there, and they had two little rooms, like maid’s rooms. And I was going fucking nuts.”

Arum grew up in an orthodox Jewish section of Brooklyn, called Crown Heights, so it’s understandable that he was extra edgy during his visit to Deutschland.

“We were in a garden, and Harold said, ‘Smoke this, it’ll make you feel better.’ I took a couple of puffs, and the flowers really came out, with beautiful colors. And I was happy, and everything was OK.” He wondered how heavy the stuff was when went to a meeting at a club in town, and he walks in, and sitting at every table are young guys, all with eye patches on. He wasn’t tripping, this was after the June 5-10 “Six Day War,” involving Israel, Egypt, Syria and Jordan.

The Israeli Defense Minister Moshe Dayan, who’d lost his left eye to a sniper shot in 1941, became a celeb, of sorts, off the Six Day War, and the eye patch briefly a fashion accessory in certain circles. “I figured it was because of the smoke,” said Arum, of his initial puzzlement.

Thanks to Harold, who smoked his first jay in the company of Louis Armstrong, an enduring romance bloomed.

“I came back to the US and told my wife about it, and her mom was visiting, and she said, ‘I’d love to try it.’ So we had an au pair, who said she knew where to get it. And she came back with a Marlboro box filled with grass. My wife’s mom loved it. My wife loved it too. I haven’t stopped since.”

He hasn’t. The weed or the promoting.