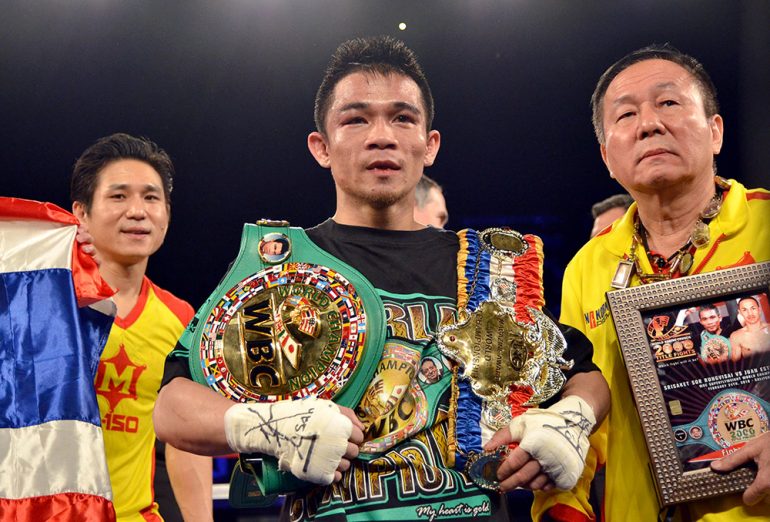 On Friday, the WBC officially announced that their board of governors had voted unanimously in upgrading reigning junior bantamweight titleholder Juan Francisco Estrada to “Franchise champion.”

This move means that Estrada is free to face Nicaraguan great Roman Gonzalez in a third fight and that longtime No. 1 Srisaket Sor Rungvisai can face Carlos Cuadras for the vacant title.

While the move was met with derision in some quarters, Sor Rungvisai, who is rated No. 1 by The Ring at 115 pounds behind champion Juan Francisco Estrada, is happy to fall in line with the decision.

“I think it is a great decision from the WBC to structure the junior bantamweight tournament,” Sor Rungvisai (50-5-1, 43 knockouts) told The Ring through his promoter Bank Thainchai Pisitwuttinan. “I will get to fight for the WBC world title against Carlos Cuadras, and if I beat him, I will fight the winner of Estrada vs. Chocolatito 3. I think it’s great for everyone and for boxing. The fans get to see two great fights and then another one with the winners fighting each other. All the four top junior bantamweight boxers, including me, get to have exciting fights for the fans.

“It is always my greatest honor to fight for the WBC world title. If I win this time, I will get to be the first three-time WBC world champion in the history of Thailand. This is a very important opportunity for me and for my country. I want to thank President Mauricio Sulaiman and the WBC board of governors for making this possible.'”

The 34-year-old Thai is pleased to be locking horns with Cuadras for a second time, having lost his title to the Mexican in May 2014.

“This is the rematch that I have wanted for around seven years now,” he said. “Since I took up boxing full-time and joined (NKL Team), around 10 years ago, I have beaten every opponent I faced, except one, which was Carlos Cuadras. So, this fight is very important for my legacy. I will make sure I will be the winner this time.”

Pisitwuttinan of Nakornloung Promotion (NKL) is also pleased with the decision that will allow his fighter to move forward with his career.

“I think this is a great structure from President Mauricio and the WBC,” said the young promoter. “It allows Srisaket to fight for the WBC world title, and the fans will get to watch two amazing fights. The rivalry between the four kings of junior bantamweight has been legendary, and it is incredible that we are having all of the four fighting in a tournament format. When the winners of the two fights get to fight each other, we will know who the best is among the four.

“We will be working together with Matchroom and DAZN to finalize the details.”