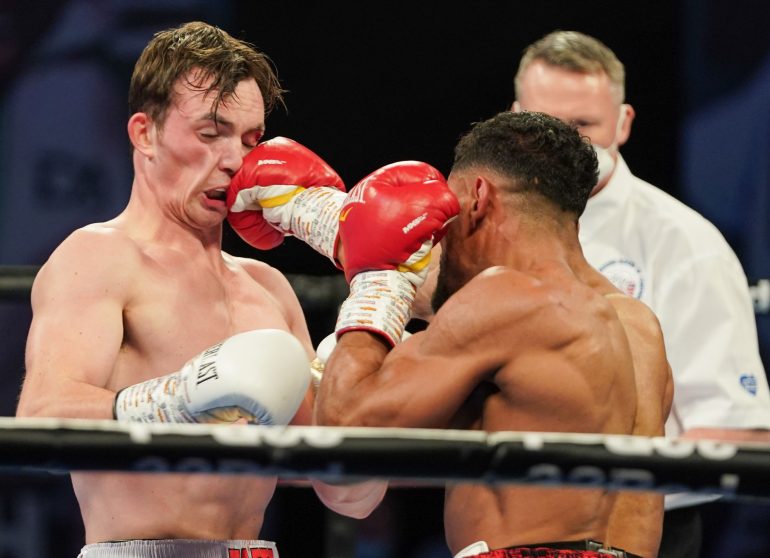 Lennox Clarke stunningly stopped much touted Willy Hutchinson in five rounds to claim the vacant British and Commonwealth super middleweight titles at the Copper Box Arena, in London on Saturday.

Hutchinson, 22, started well and used his greater height and reach to keep Clarke, 29, on the outside in the first two rounds. However, when Hutchinson was cut in the third round the Scottish fighter started to unravel.

As the tide continued to turn, Clarke, who works a day job as a car salesman, backed Hutchinson up and landed a booming right hand that visibly hurt Hutchinson. As he stepped back to give himself room, Clarke (20-1-1, 8 knockouts) landed another right hand and as Hutchinson toppled to the corner, the Englishman landed a left hook for good measure.

Although Hutchinson (13-1, 9 KOs) tried to rise, he was clearly on unsteady feet and referee Bob Williams waved off the action at 1:55 of the fifth round.

Clarke, who was 11/2 against to pull the upset, was understandably jubilant moments later.

“It’s like a dream come true,” said Clarke, who scored a career-best win. “I’m over the moon. He’s a sharp kid, but I knew I could take his best shots. I knew it was too early for him, stepping up against me after knocking over them wallies. I knew he wasn’t enjoying it; he was tying me up and we kept doing what we had to do. He wasn’t ready. I knew if I hit anyone, I’m taking them out.”

When asked about his next move he simply said: “I’m not one to pick and choose, I’ll fight anyone.”

It’s a long way back for Hutchinson. He’s young enough to comeback, but the manner in which he fell apart will be concerning.