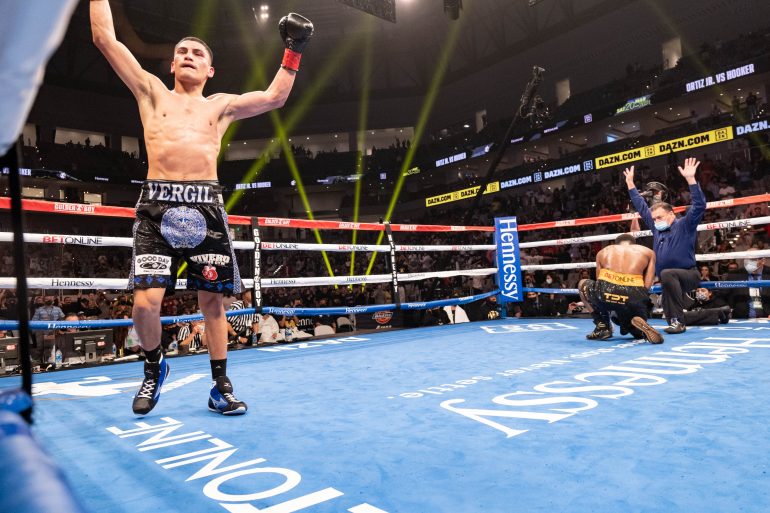 Vergil Ortiz Jr. and Jaron Ennis were awarded The Ring Magazine Prospect of the Year award in 2019 and 2020, respectively. The welterweight up-and-comers are so precocious that they’re not only compared to longstanding contenders and titleholders in the 147-pound division, many hardcore fans and media consider them future world-beaters.

However, due in part to last year’s pandemic-imposed inactivity, neither had cracked The Ring’s welterweight top 10 until this past Saturday, when Ortiz (17-0, 17 KOs) stopped respected former WBO 140-pound titleholder Maurice Hooker in seven competitive rounds in Fort Worth, Texas.

The two Dallas natives went toe to toe for most of the fight, Ortiz edging the first two rounds on power connects and Hooker (27-2-3, 18 KOs) rallying in Rounds 3 and 4 through sheer volume and guts before the just-turned 23-year-old took control of the shootout with a fifth-round body attack. Ortiz scored a knockdown in Round 6 and a hand injury suffered by Hooker (which occurred as Ortiz landed a big right) ended the fight in Round 7.

The Ring Ratings Panel was impressed enough by Ortiz to have him replace Garcia Boxing Academy stablemate Mikey Garcia for the No. 10 spot in the 147-pound rankings.

“I’d like to see Ortiz enter at No. 10, suggested panelist Anson Wainwright. “Hooker doesn’t have a resume at 147 but is a very solid fighter and Ortiz is on the way up. I feel the time is right for him to crack the top 10.”

“Vergil Ortiz is legit and has legit attitude about facing anyone,” added Mulcahey. “He could be like a young (Ray) Mancini who got (Alexis) Arguello too early and rebounded (if he does get that Crawford or Spence fight). I say bring him in at No. 10. Welterweight is, perhaps, most talent-packed division in boxing, so (Mikey) Garcia’s lack of activity and fights at this weight are a big factor in his dropping out.”

Ennis (27-0, 24 KOs) will get his opportunity to crack The Ring’s welterweight rankings when he takes on No. 9-rated Sergey Lipinets on April 10.

Heavyweight – Oscar Rivas remains at No. 9 after a stay-busy third-round stoppage of unrated Sylvera Louis.

Cruiserweight – Lawrence Okolie advances to No. 3 after a sixth-round KO of Krzysztof Glowacki, who drops to No. 8.

“Okolie isn’t going to be everyone’s cup of tea,” Wainwright said of the new WBO titleholder. “He’s not aesthetically pleasing to watch but he’s going to be an awkward style for anyone to figure out at cruiserweight.”

Added Mulcahey: “I did not expect Lawrence Okolie to handle Glowacki with such ease, a win sure, but not a one-sided beatdown in six rounds. He may be a Johnny Nelson-type who does not get credit but racks up a bunch of title defenses.”

“He took his sweet time and broke down Deines,” said Wainwright. “He wasn’t overly impressive, but he did what he had to do to shake of the ring rust.”

Added Mulcahey: “I think the somewhat lackadaisical Artur Beterbiev performance can be put down to his knowing there was no danger in Adam Deines and cruising to victory. I know he can do much better but motivation is part of boxing.”

Flyweight – Angel Acosta remains at No. 8 after a stay-busy eight-round decision over unrated Gilberto Mendoza.