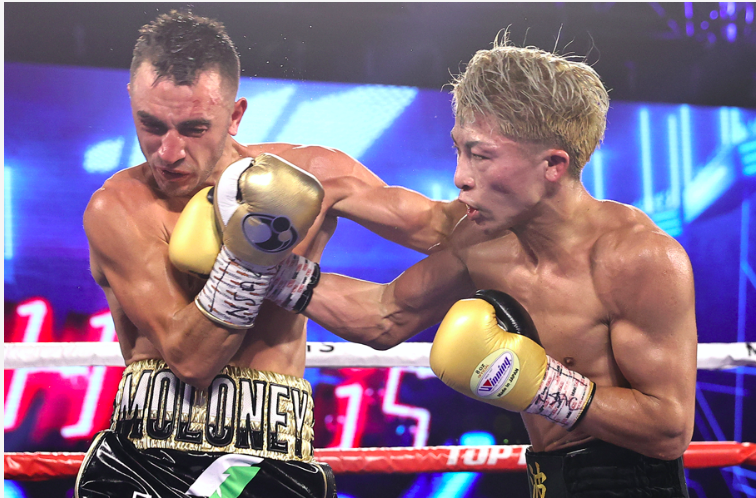 Naoya Inoue, The Ring Magazine bantamweight champion and unified titleholder, is due to face Michael Dasmarinas in an IBF mandatory defense, but instead of the fight taking place in Inoue’s native Japan as originally planned, it will take place on June 19 at a venue to be determined in Las Vegas, Top Rank chairman Bob Arum told The Ring.

The fight will air on an ESPN platform in the U.S.

Dasmarinas is from the Philippines and would be required to quarantine for two weeks, Arum said. It has caused many issues for Japanese boxers, who are unable to fight opponents from other countries.

“(Teiken Promotions’ Akihiko) Honda is always complaining that the Japanese boys can’t fight outside fighters because of this rule. They have the same thing in Australia,” Arum said.

In 2017, he defended a junior flyweight world title by sixth-round knockout of Antonio Nieves at the then-Stub Hub Center in Carson, California, on the Srisaket Sor Rungvisai-Roman “Chocolatito” Gonzalez 2 undercard. In his most recent bout, on Oct. 31, he retained his bantamweight title for the fourth time when he knocked out Jason Moloney in the seventh round inside the bubble of the conference center at the MGM Grand in Las Vegas.

Arum said the plan for the fight is to have at least a limited number of spectators now that Nevada is allowing some fans to attend events such as the NHL’s Golden Knights games at T-Mobile Arena in Las Vegas.

“We are working on it,” Arum said, adding that Top Rank’s first priority in terms of fan attendance is the May 22 undisputed junior welterweight title fight between Jose Ramirez and Josh Taylor, which will take place at either the MGM Grand or Mandalay Bay in Las Vegas. “We won’t announce (the Inoue fight) until everything is cleared for spectators.”

Arum said that despite all the issues caused by the pandemic, he is glad that Inoue will be back in the U.S. for his next fight because of the exposure it will bring him.

“He’s happy about that, too,” Arum said of the fighter.

The 28-year-old Dasmarinas (30-2-1, 20 KOs), a southpaw, is unbeaten in his last 13 fights. He owns a fourth-round knockout of Karim Guerfi in 2018 and won a unanimous decision over Kenny Demecillo in a 118-pound IBF title elimination fight in March 2019. He has fought once since then, a knockout win in October 2019.

Arum said that should Inoue, a three-division world titleholder, defeat Dasmarinas it was unclear what sort of bigger fight he would pursue.

“Who’s the big fight for him? I think he’s going to go up in weight,” Arum said, adding that was by no means set in stone.

Arum said perhaps they will revisit a unification fight with WBO titleholder John Riel Casimero, whom Inoue was supposed to face in April 2020. That bout was canceled due to the pandemic and when boxing returned Casimero went in another direction.

“We can make that fight down the line. That would be a good fight,” Arum said.

He said Inoue could also target a unification fight with the winner of the bout between WBC titlist Nordine Oubaali and former titlist Nonito Donaire, who had their mandatory bout postponed because both boxers tested positive for COVID-19 late last year. Inoue outpointed Donaire in the 2019 Fight of the Year that served as the final of the eight-man World Boxing Super Series bantamweight tournament.

Arum noted that he would be willing to match Inoue against Oubaali or Donaire but acknowledged that it would be easier to do a fight with Oubaali “because the people who have Oubaali are close to us – (adviser) MTK and (French promoter) Jerome (Abiteboul). We will discuss all of that in June when (Inoue) is over here for the fight.”