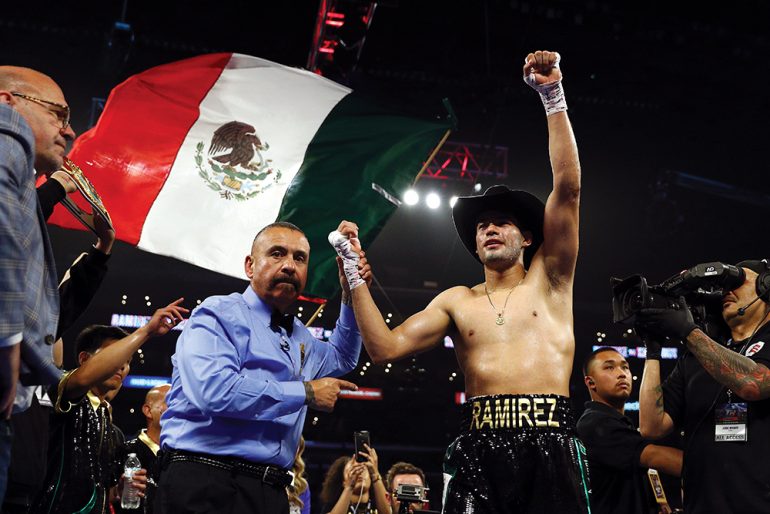 FORT WORTH, Texas – Since signing with Golden Boy Promotions last month, undefeated light heavyweight contender Gilberto Ramirez has been putting his adventurous side on full display.

It was no different on Saturday when the former super middleweight titleholder was in attendance for the Vergil Ortiz Jr.-Maurice Hooker fight, at Dickies Arena.

In an exclusive interview with The Ring, the southpaw Ramirez (41-0, 27 knockouts) called out his division’s most destructive puncher to dance.

“I’m targeting [unified light heavyweight titlist] Artur Beterbiev,” Ramirez stated. “I think his return [against Adam Deines] was a little dull for him.

“But he’s still the champion. He has two belts and those are two belts that I want.”

However there might be a reason the 36-year-old Russian looked a bit sluggish.

After myriad postponements – five to be exact – in which Betebiev had to deal with opponent changes, a rib injury and a bout with COVID-19, he scored two knockdowns en route to the win.

The 29-year-old Ramirez, who won the WBO super middleweight title by unanimous decision in April 2016 and went on to defend his title five times before moving up to light heavyweight in 2019, reiterated that he wants big fights and is grateful to now be fighting under the banner of Golden Boy Promotions, a lifelong dream come true.

“I want all of the champions,” he added. “I’m very grateful to be with Golden Boy. I feel like I’m a part of the family.

“Oscar De La Hoya, he’s my idol. I have always wanted to be like him, a legend. I want to be a two-division world champion.”

Ramirez most recently fought last December, when he stopped Alfonso Lopez in the 10th round of a scheduled 12-round contest, in Galveston, Texas.

WITH NEW PROMOTION, GILBERTO RAMIREZ ALREADY HAS HIS EYE ON THE FUTURE