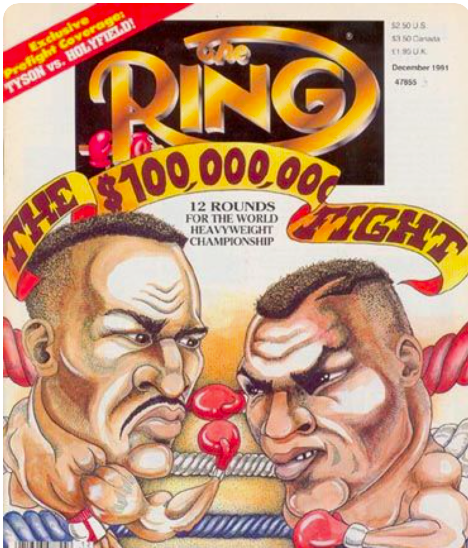 On Monday, it looked and sounded like Mike Tyson and Evander Holyfield were not near the same page, and a plan for them to face off in an exhibition on May 29 was maybe going off the rails.

Team Holyfield put out a release which announced that Tyson’s people had refused a version of the deal which had the Holyfield side putting up $25 million as a guarantee to Tyson.

“Negotiations at a standstill,” that’s the phrase used in the Holyfield release. But Tyson did a hit on the Haute Living Instagram channel, which ran Tuesday, March 23, and told the host that his Legends Only League is cookin.’ 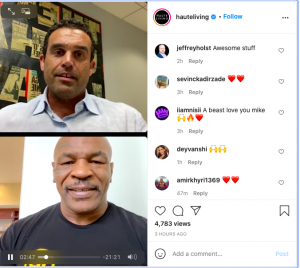 OK, what about this Tyson vs Holyfield fight, the 2021 version, the host asked the Hall of Fame fighter, who has transitioned massively in the last two years as an entrepeneur.

“I could see that happening,” Tyson said. “Only thing we have to to do is some small fundamental differences, get some paperwork and it’s off to the races with me and Evander.” He may have been referring to some of what was discussed in this piece.

He wants to have promoters out of boxing, Tyson said, and all they’ll need is a lawyer to craft a contract. Let the fighters keep all the money, basically, is what he lobbyied for. He didn’t delve further, and explain who would then be putting together elements of the production, though.

“I just want everyone to know, the fight is on with me and Holyfield, Holyfield’s a humble man, I know that, he’s a man of God, and I’m God’s man, and I’m gonna be successful May 29.”

OK, so to be clear that contradicts what people who read that this promotion was stalled in USA Today on Monday. Reporter Josh Peters wrote, “Azim Spicer, who is Tyson’s brother-in-law and has overseen contract negotiations for the fight, disputed the Holyfield camp’s claim and said the prospective fight is all but dead. ‘Nobody offered Mike $25 million, said Azim, who added, ‘Mike doesn’t want to do anything with them anymore. We’re done.’’ But while saying it was a long shot, Azim said the fight still could take place if Holyfield agrees to a 50-50 split of an undisclosed purse and 50-50 split of the “back end’’ money, which would include revenue from pay-per-view sales and merchandise.”

The money to be disbursed from that “undisclosed purse” would stem from the faceoff May 29 at Hard Rock Stadium, home of the Miami Dolphins.

I confess, I do not know what sort of track record Azim Spicer has in this level of deal-making and contract construction. But some portions of the USA Today story left me confused. “Spicer said Holyfield’s camp does not have $25 million for such a guarantee and Tyson’s camp refused to guarantee Holyfield $25 million because the market for the fight wouldn’t support it.” But attorney Leon Margules on Monday confirmed that Holyfield backers offered to put up $25M as Tyson’s guarantee, and he is a boxing lifer who isn’t known for extravagant talk. I’d be inclined to believe him, that this was no bluff. No, I don’t know who the backers are, however.

There, Spicer is publicly diminishing the value of the bout. That doesn’t make sense to do if negotiations get back on track, and the 50-50 split Holyfield says Tyson agreed to in a phone call is adhered to. On a 50-50 split, co-organizer Spicer would want to whet appetites that this rivalry re-boot is must see streaming, because there’s more upside to be gobbled if the public responds, no?

More from the USA Today piece: “Spicer said Tyson still wants to fight at least once more and so Spicer is negotiating with possible opponents that he declined to name. ‘Holyfield blew it,’ Spicer said. “He’s going to be watching on the sidelines again.”

Maybe he’s doing some posturing in the press, or maybe they are actively sifting options and pondering alternatives. Maybe they have a YouTuber, or athlete from another sport they can swap in and generate buzz to meet or exceed the revenue spun out from Tyson-Jones…but there’s no other arrangement for Tyson which has the storyline so identifiable. It would be hard to find a foil for Tyson that is catalyst to bear fruit so juicy AND low hanging.