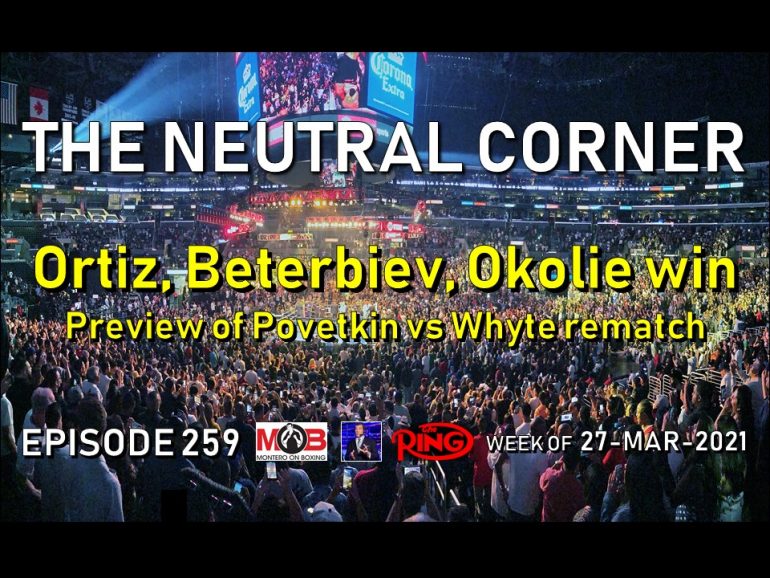 On episode 259 of The Neutral Corner boxing podcast, host Michael Montero was joined by promoters Terri Moss of Atlanta, Georgia and Al Jones of Cleveland, Ohio. They are working in association with Rob Butler of RB3 Sports (also from Ohio) to put on a fight card in Atlanta on Saturday, April 3.

Moss, a former fighter who now promotes shows out of her gym, “Buckhead Fight Club” in Atlanta, says her phone has been ringing nonstop in recent weeks with promoters from other states looking to bring shows to her venue.

“It’s not only promoters, but trainers and managers trying to get their fighters on our cards,” she told RING. “At my gym we have everything, a ring, the lighting, seating, it’s a one stop place. And Georgia is open for business when many other states are not.”

While it’s the large promoters that got all the attention from the boxing media, club promoters are the lifeblood of the sport. Moss says diehard fans in the Atlanta area love coming to her shows because they know they will see competitive fights.

“The big shows have all the glitter but many times those fights don’t live up to the hype,” she said. “Club level shows are always fun. The show we just had here in Atlanta last week, all the fights were competitive. There were a couple upsets, that’s when you know that you have some good matchmaking.”

“Our venue has a reputation in the community for putting on a good show.”

On Thursday, March 18 in Puerto Rico, 22 year-old Angel Fierro scored a come from behind KO6 win over Alberto Machado. Fierro, a native of Mexico who is now based out of San Diego, California, was down in the first and second rounds. But he battled back to stop the former titleholder toward the end of the sixth and officially put the lightweight division on notice.

On Saturday, there were three cards of note. In Moscow, Artur Beterbiev scored a workmanlike TKO10 win over Adam Deines. Could a fight with Dmitry Bivol or Joe Smith Jr be next? In London, Lawrence Okolie won a vacant cruiserweight title by stopping former titleholder Krzysztof Glowacki in sixth rounds. The 2016 English Olympian called out RING champion Mairis Briedis, saying he would like to unify titles with the Latvia native next.

In Fort Worth, Texas, Vergil Ortiz Jr faced his toughest test to date against former junior welterweight titleholder Maurice Hooker. After six highly entertaining rounds, Hooker injured his right hand and could not continue, giving Ortiz the TKO7 win to improve to 17-0 with 17 knockouts. Terence Crawford, currently rated no.3 pound for pound by RING, was ringside. Ortiz was asked about a fight with “Bud” and said he would be more than willing to face him.

Thad expressed discontent with Terence Crawford’s recent body of work. “I think it’s time he gets pulled off the mythical pound for pound list,” he said. “He just doesn’t want to fight anybody. It’s this entitlement attitude that’s killing boxing. When Teofimo Lopez called out Lomachenko, he didn’t say no. Loma stepped up and said “here’s more money” and fought Lopez.”

Another caller really liked the attitude of Vergil Ortiz, saying he was willing to face Terence Crawford next. “I’ve seen mixed reactions to it on Twitter. But if they did fight, regardless if Vergil won or lost, whether it was too early or not, I actually think we should all encourage him. Yeah Crawford has the edge, but I’m telling you right now, Ortiz means business.”