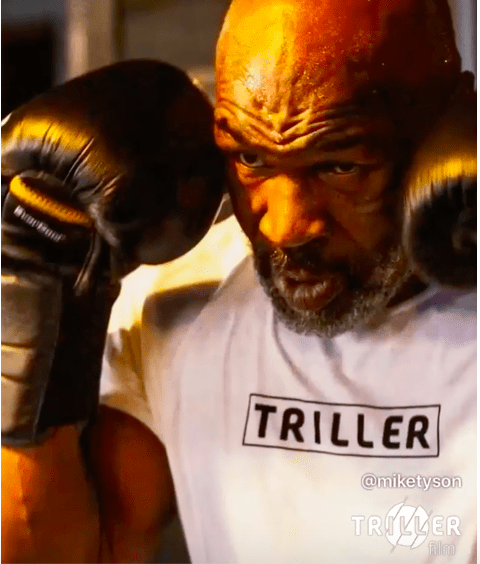 Mike Tyson, formerly known as “The Baddest Man on the Planet,” had a better 2020 than maybe the majority of citizens in America, because during the peak pandemic year he received a boost to his brand when he took part in a Nov. 28 pay per view boxing exhibition against Roy Jones.

Most of you reading this watched the spectacle, which saw the now 54 year old Tyson doing modified battle against Jones, age 52, in California.

Overall, the presentation, which featured undercard bouts and non-boxing fare, like Snoop Dogg doing a mini-concert and burning blunts, drew plenty of high marks from customers. The market spoke, too, proving that Tyson is a potent draw, still. The $50 PPV snagged around 1.6 million buys, and reportedly $100 million in worldwide PPV revenue. It felt like maybe this would be the beginning of a successful combat-oriented re-boot for the now middle-aged pugilist/influencer.

Then, some time passed, and we didn’t hear about another Tyson event in the works. Triller hopped into the boxing space, all in, announcing a series, Triller Fight Club, and events on April 17 (YouTube attraction Jake Paul vs. MMAer Ben Askren is the feature bout) and then June 5 (lightweight ace Teofimo Lopez vs. George Kambosos is the main event.) Tyson, though, wasn’t attached to either promotion.

And now it becomes more clear why. RING came in possession of a letter composed by a Triller attorney, speaking to the possibility of Tyson doing another boxing match, and who does or does not have rights to market the bout and promotion as a whole. The letter, word is, has been sent to the offices of entities like DAZN, ESPN, In Demand, and the like.

I requested from Triller boxing boss Ryan Kavanaugh an update on the state of the Tyson-Triller relationship, and was furnished a “no comment.” One might surmise that is because there are legal issues in play, and legal counsel would advise holding off on comment until it gets sorted.

The fighter turned social media influencer on his podcast “Hotboxin’ With Mike Tyson,” on March 18, said he’s looking at a May 29 fight date, in Miami, against foe TBA. Speculation exists that old friend Evander Holyfield and Tyson would get it on, for a third time.

So, the Triller squad looked to spread the word that in their view they have an existing relationship with Tyson, which includes first crack at being the production driver for the Tyson 2.0 ring return, and also last right of refusal. 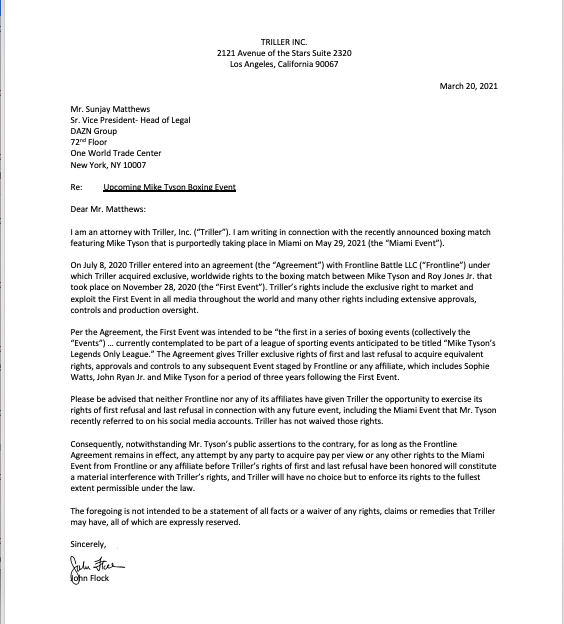 There’s not too much tangled legalese in the letter, signed by attorney John Flock. The persons “Sophie Watts” and “John Ryan Jr” referenced in Triller’s ‘hear ye hear ye’ had involvement in the Tyson-Jones mashup, repping Eros Innovations, a company specializing in celebrity brand building.

On Saturday, March 20, a post appeared on Tyson’s Instagram page which spurred chatter about the Tyson-Triller union. “Just to be clear there is no Tyson with Triller fight,” the post began. 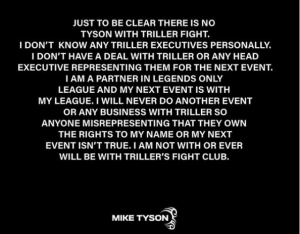 There will be no more deals with Triller, the post continued.  Now, how much of a command does Tyson himself have over who owns what rights on his next fight, if he chooses to have one? That’s for him to speak to, if he wishes.

Outside looking in, this feels like there are two versions of the story being told and it will take a thorough reading of contracts to indicate whose conception of the matter is valid.