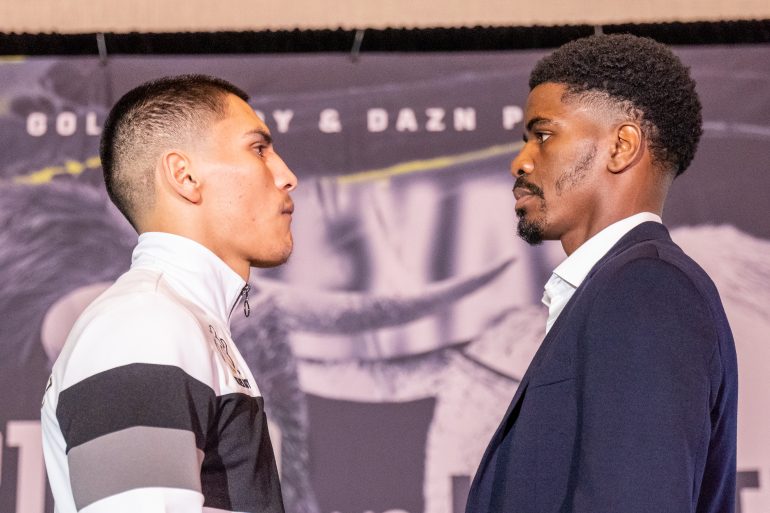 Vergil Ortiz Jr., one of boxing’s rising stars, is officially set to kick off his 2021 campaign, but first had to lose some weight at the scale.

A hometown battle between two Dallas, Texas natives will go down on Saturday as Ortiz Jr. (16-0, 16 KOs) and former junior welterweight titlist Maurice “Mighty Mo” Hooker (27-1-3, 19 KOs) clash in a 12-round, DAZN-streamed battle at Dickies Arena in Fort Worth.

Ortiz (16-0, 16 KOs), a 22-year-old knockout artist from Grand Prairie, Texas, checked in at 147.6 pounds and was given one hour to shed 0.6 pounds in order to challenge Hooker for a secondary belt. In his most recent bout, he dominated Samuel Vargas en route to a seventh-round stoppage in California.

At approximately 1:18 p.m., Golden Boy personnel informed The Ring that Ortiz made weight on his second attempt, coming in at 147 on the dot.

The 31-year-old Hooker (27-1-3, 18 KOs), who is making his debut as a full-fledged welterweight, tipped the scales right on the dot at 147 pounds. He is coming off a first-round knockout of Uriel Perez in December 2019 on the undercard of the super middleweight affair between Daniel Jacobs and Julio Cesar Chavez Jr. in Arizona.

Ortiz was also allocated an hour to lose 0.2 pounds to avoid being stripped.