Angel Fierro gets dropped twice, comes back with KO win over Alberto Machado 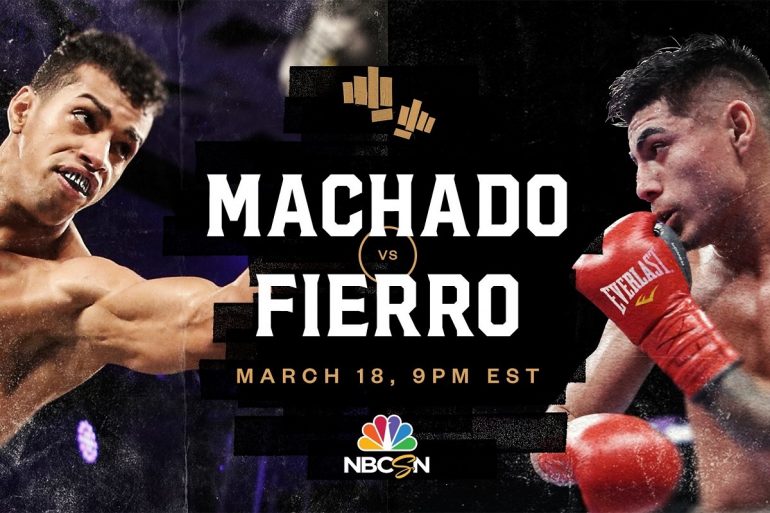 Angel Fierro (18-1-1, 14 knockouts) had to pick himself up off the canvas twice before roaring back to stop former junior lightweight titleholder Alberto Machado on Thursday night. The thrilling comeback win added another chapter to the great Mexico vs. Puerto Rico boxing rivalry.

“[Machado] dropped me twice but I was able to come back,” Fierro said after the fight. “I’m just ecstatic that I was able to face a fighter of his quality and come out victorious.”

“I didn’t come here to be a tourist in Puerto Rico; I came to win.”

Machado (22-3, 18 KOs), a southpaw, dropped Fierro in the first and second rounds, both times off right hooks in the mid-range. Machado appeared to hurt him again in the third round with a hard body shot that had Fierro briefly keeling over.

But suddenly the momentum changed in the fourth round. Fierro started coming forward, getting low and pushing Machado back with overhand rights. It was more of the same in the fifth, as Fierro had taken over control of the fight.

Less than a minute into the sixth round, with Machado backing up toward the ropes, Fierro landed a looping left hook that landed flush. Sweat went flying and Machado went crashing into the canvas. He was then counted out by referee Jose Hiram Rivera, giving Fierro the sixth round KO win.

All three judges had Machado ahead 48-45 at the time of the stoppage. It was a shocking result for the Puerto Rican, who had started out so well. After being stopped twice in a row by Andrew Cancio in 2019, Machado moved up the lightweight, where he appeared to be a little steadier on his feet. But now, having lost three of his last four bouts by knockout, his future is unclear. It’s the exact opposite for Fierro, who is only 22 years old and just scored the biggest win of his career.

After seeing Brandon Adams come back to stop Serhii Bohachuk during the last Ring City USA headliner, fans were treated to another come from behind KO win on NBC Sports Network tonight. The new fight series is quickly gaining momentum with diehard boxing fans.

In the co-main, former Irish Olympian Joe Ward (3-1, 2 KOs) avenged his lone pro loss with a unanimous decision victory over Marco Delgado, of California, having faced each other for the first time in October of 2019. Ward, making his pro debut on that night, was ahead early when he suffered a freak knee injury and could not continue, giving Delgado the TKO2 win. After recovering from his injury, Ward fought twice last year in Mexico, scoring two first round stoppages. Tonight’s rematch was an ugly affair, as Delgado (7-2, 5 KOs) attempted to rough Ward up, fouling repeatedly. However Ward kept his cool and boxed his way to a clear win. All three judges at ringside scored the light heavyweight bout 60-54 for the Irishman.

Before the co-main, Mexico’s Alma Ibarra improved to 8-1 (4 KOs), beating American Maricela Cornejo by unanimous decision in an eight-round middleweight bout. The judges scored it 77-75 and 79-73 twice for the Mexican, who was coming up in weight. Both fighters were inactive in 2020 and coming off losses in their previous bouts in 2019. Cornejo (13-5, 5 KOs), a three-time world title challenger, has now dropped three of her last four.

In the TV opener, bantamweights Jose Martinez and Israel Gonzalez fought to a 10-round majority draw. Gonzalez (26-4-1, 11 KOs), of Mexico, appeared to take the early rounds but Martinez (21-1-3, 14 KOs) found his rhythm in the middle rounds. There was good two-way action down the stretch but most ringside observers felt the Mexican had done enough to pull it out. Martinez, of Puerto Rico, fought to a draw for the third time in his last seven bouts.

Prior to the televised card on NBC Sports Network, three undercard bouts were streamed live on Twitch. Results below:

Former junior flyweight titleholder Angel Acosta improved to 22-2 (21 KOs) with a unanimous decision win over Gilberto Mendoza (17-10-3, 8 KOs), of California. Acosta dropped Mendoza in the seventh round of their eight-round junior bantamweight fight.