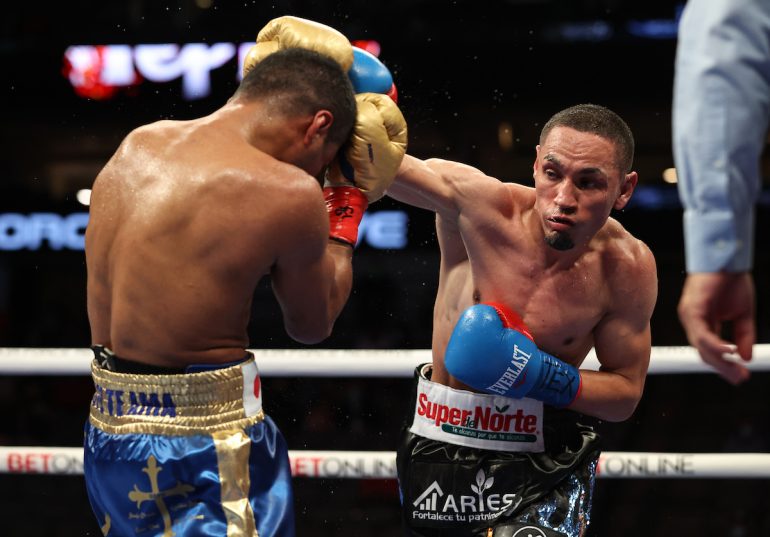 Juan Francisco Estrada fires away at Roman Gonzalez during their rematch. Photo by Melina Pizano/Matchroom Boxing
18
Mar
by Doug Fischer

The boxing world was shocked by the unexpected, untimely passing of Marvin Hagler this past Saturday.

In the shadow of this devastating news, Juan Francisco Estrada avenged his hotly contested 2012 unanimous decision loss to Roman Gonzalez by scoring a scintillating (and disputed) split-decision over “Chocolatito” in Dallas.

The fierce efforts and elite-level boxing craft displayed by the junior bantamweight rivals was a fitting tribute to the former middleweight champion, who was known for his supreme conditioning, iron constitution and take-no-prisoners mentality. Rounds six and seven were breathtaking. Round 12 was an instant classic. 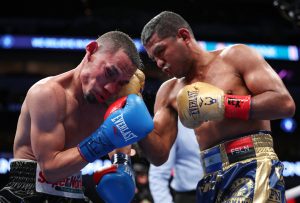 Both fighters averaged more than a 100 punches per round. Gonzalez (50-3, 41 KOs), The Ring’s No. 2-rated junior bantamweight, held a slight connect-rate edge in CompuBox’s three punch categories (total, jabs and power).

Gonzalez, who has been a world-class fighter since 2008 during a 16-year pro career that has spanned four divisions, was brilliant in defeat. The majority of fans and media believed the 33-year-old Nicaraguan deserved to his hand raised and the Ring Ratings Panel agreed that the future hall of famer deserved to retain his No. 2 position in the 115-pound rankings.

Estrada, the underrated 30-year-old technician from Sonora, Mexico, was deemed worthy of moving up a space in the pound-for-pound rankings.

“Wow words fail me, what a fight,” said panelist Anson Wainwright. “Juan Estrada edged past Roman Gonzalez in their wonderful rematch. Take a bow, gents. Both are class acts. I think Estrada deserves to move up (from No. 8) to No. 6 (pound-for-pound). Lots of praise rightly heaped on Chocolatito but Estrada deserves his too.”

Panelist Martin Mulcahey and Diego Morilla didn’t agree with moving Estrada up two notches in the pound-for-pound rankings based on what they saw as a controversial decision. 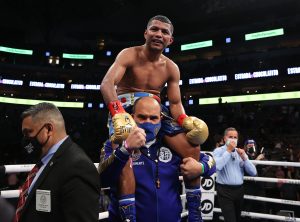 “Despite picking Estrada, I had Gonzalez winning that fight and it looks like the majority of fans did as well, not by much, mind you, but still a solid two-round advantage in my opinion,” said Mulcahey. “I am all for accepting judges’ rulings since they have best seats in house, but I’m not sure we can move up Estrada given what I interpreted in that showdown. The fight was great, so I can see using that as excuse. I do believe Estrada should be rated higher than Teofimo Lopez and Vasily Lomachenko, at this time, so won’t argue hard against it, after all it is an official win, and maybe I need to go an re-watch the fight.”

Morilla didn’t feel like needed to re-watch it to know who should have won.

“Not sure I’d move Estrada two spots above his current position based on a performance that he himself said he thought would ‘end in a draw,’ minutes after his corner scolded him for ‘being way down in the scorecards’ before the 11th round (ah, the benefits of having a Spanish-speaking member of the panel checking out the corner talk and the Spanish-language broadcast interviews, huh?),” Morilla said.

“I had Gonzalez up by four points, honestly, and I thought there was no way he would lose after that amazing performance (in which he was the only fighter that had the other one doing the drunk duck dance, as he did in the second half of the last round). I’d say let’s move Estrada up to No. 7 and everyone’s happy.”

Pound for pound – Juan Francisco Estrada advances to No. 7.

Super middleweight – David Benavidez remains at No. 1 after an 11th-round stoppage of unrated Ronald Ellis.

“David Benavidez is a beast in that division, nothing but praise for him when his head is in the game and fight,” said Mulcahey. “He’s a deserved No. 1 as long as he keeps making weight and passing drug tests.”

Welterweight – Kudratillo Abdukakhorov remains at No. 8 after forcing unrated Javier Flores to retire after eight rounds.

Lightweight – Isaac Cruz remains at No. 10 after outpointing unrated and previously unbeaten Jose Romero over 12 rounds.

Junior bantamweight – Estrada remains Ring champion. Srisaket Sor Rungvisai, who stayed busy with a third-round stoppage of Kwanthai Sithmorseng, remains at No. 1. Gonzalez remains at No. 2. 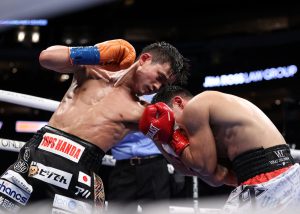 Kyoguchi (left) was too much for Vega. Photo by Ed Mulholland/Matchroom.

“Bizarre stoppage,” remarked Wainwright. “It looked like Vega broke his hand on Kyoguchi’s head. Vega had given the defending champion some problems with his (diminutive) size early.

Said Mulcahey: “I think even without the injury Hiroto Kyoguchi was going to beat Axel Vega, but it was entertaining scrap and glad more people got to see The Ring champ at this weight.”