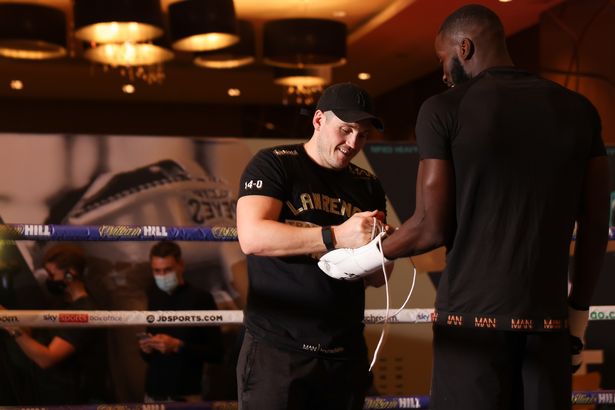 “You’d have to say it is a massive step up on paper,” said trainer Shane McGuigan during the fight-week buildup that sees his charge, Lawrence Okolie, challenge veteran Krzysztof Glowacki after just 15 pro fights.

Okolie is the British, Commonwealth and European champion and although he represented Great Britain at the 2016 Rio Olympics he was not a vastly experienced amateur.

“I felt that Yves Ngabu was a really tough fight and I think domestically anyone in Britain would really struggle with him because he’s tough and robust,” McGuigan went on. “That was a very good test for us from a physical standpoint, but I don’t think much from a boxing standpoint, he couldn’t stand off and make him [Okolie] miss, it was more of an attritional fight. With this, Glowacki sits back a lot, he’s definitely got world-class power that we’ve seen, like when he dropped [Marco] Huck, and he stunned [Mairis] Briedis a bit in their fight – so in terms of power it’s a big step up. In terms of boxing ability, he’ll make Lawrence fall short and miss quite a bit, he leans back quite well. He won’t just try and slug it out, but he’s also got vulnerabilities and that’s a big positive for us. Once Lawrence starts chipping away and getting to him, he’ll be able to stop him.”

This is the fourth fight since McGuigan and Okolie joined forces nearly two years ago.

Okolie had been labelled boring to watch after failing to deliver fireworks in stale points victories over Isaac Chamberlain and Matty Askin but he’s won his last five early, bringing excitement in the process.

“Lawrence wants to go down as a good fighter, he doesn’t just want to nick decisions and be in ugly fights,” added McGuigan. “He takes things quite personally when he gets booed or if people make the suggestion he’s holding. Obviously he has been in boring fights before, he carries world-class power and he could be a lot more effective… I didn’t think he could get away with what he was doing at the top level anyway. Since we linked up, we changed things. They [opponents] were getting their rest whenever he was holding, because they’re the ones that want to smother his range. They’re the ones that want to tie him up because he has got a 6-foot-10-inch reach and you can’t generate real force on the inside – so for them they want to shorten the range, get in there and smother him. A lot of the things we’ve been doing is making him aware that he’s hindering himself massively – even though he feels comfortable in there because he’s physically strong – he’s hindering himself by being in the clinch. That’s been a big thing I’ve been working on with him.”

The idea is to keep things long and punch from range. Okolie is 6-foot-5 and has designs on moving up to heavyweight, although he wants to do maximum damage at cruiser first. 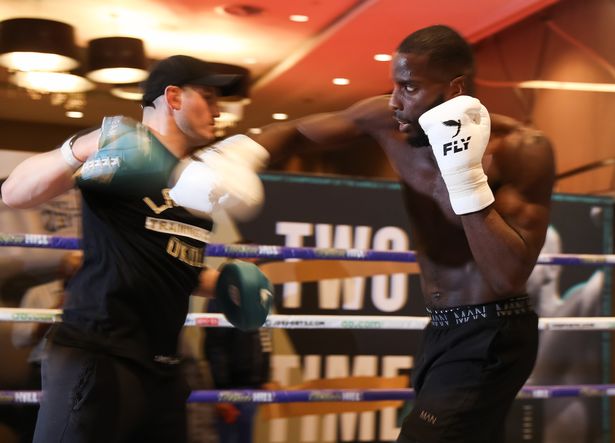 Why have there been instances of Okolie failing to dazzle?

“I think his lack of amateur experience…,” considered McGuigan. “He’s learned a lot through sparring, he hasn’t really been focusing on technique as much [in the past] and actually fundamentally getting better. It’s just been, ‘All right, jump in and do eight rounds with AJ [Anthony Joshua]’ when he’d had 15 bouts. You’ve got to credit that massively [for some of Okolie’s progress], and because of his physicality he’s got away with a lot. We’ve been working on fully extending his jab, making sure he’s not smothering his right hand, he’s maintaining his distance rather than going gung-ho and getting tied up.”

That could make Saturday’s fight with Glowacki a thriller.

“I think so,” agreed Shane. “With Lawrence’s power and Glowacki’s power… and Glowacki’s not just one to maul you, either. I think he likes to tee people up and hit them at full length, so it’s going to be a fan friendly fight and the Lawrence I’ve been watching in sparring is getting better every single day. When he came out of the amateurs, a lot of them [Team GB fighters] would be 75-80 per cent developed of their capabilities whereas he was only 30-40 percent of what he can be as a fighter, so I see a guy who is improving all the time. At the same time Glowacki can be dangerous at range as well, we’re going to have to be really switched on with big shots being thrown over the top.”

Okolie has won 12 of his bouts inside the distance and carries a reputation of being a big hitter, something McGuigan can vouch for.

“He generates a hell of a lot of power in his straight shots, more than he does in his bent arm shots, so for him to be effective he’s going to have to hit guys at length,” Shane explained. “He’s coachable, he’s got very good feet, he’s quick. I think when he steps up to heavyweight, you’re going to see him at his best. When he’s sparred people like Daniel Dubois he’s more than held his own every time because he’s got that physical stature of a heavyweight but the speed of a cruiserweight.”

The move to heavyweight is a financial goal more than a physical necessity because he’s comfortable at the weight now.

“He does it easy,” said McGuigan of making cruiser and their lofty goals. “He really does. He’s got light legs but he’s got strong legs as well. He’s very lucky with his frame. I want him to become undisputed champion at cruiserweight. I want him to fight Briedis. People might think I’m mad but I’d like Briedis. Maybe Arsen Goulamirian next… I don’t think we could do a better job than somebody like Tony Bellew did on [Ilunga] Makabu, so Goulamirian, but if Lawrence puts on a great display I don’t see why we couldn’t fight Briedis next. I know Briedis has said he wants to go up to heavyweight or bridgerweight, but if there’s a big enough fight that can entice him to put his belts on the line in a pay-per-view show in the U.K., I think that would be the one and I don’t believe we need three or four fights before we do that.”

Okolie-Glowacki, plus undercard action, will be broadcast live by DAZN in the U.S. and Sky Sports in the U.K.