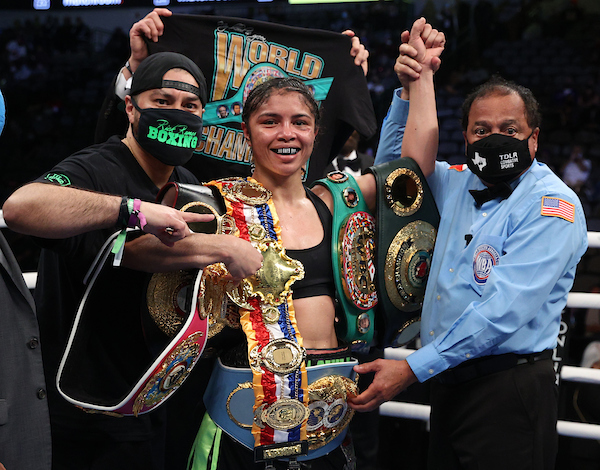 Their first fight was a sloppy affair, a messy clash of styles in a literal “street corner fight” that ended in controversy. But this time, Jessica McCaskill demonstrated that her mid-August mild upset over Cecilia Braekhus was no fluke as she delivered a shutout win in the rematch between two of the best female fighters in the world today — and lifted the inaugural version of The Ring women’s welterweight belt in the process.

The win picked up by “Caskilla” back in 2020 in a ring set up on a street corner in Oklahoma left many people doubting whether she was the real deal or whether she had gotten lucky against a slightly faded great champ, bullying and roughing Norway’s “First Lady” to end up unifying all four major belts in the division in a closely contested (and scored) championship bout.

This time, in a fight that took place this past Saturday, February 13 in Dallas, Texas, McCaskill left no doubt as she convinced the remaining naysayers of the world that she belongs not only at the top of her division, but also on the podium of the mythical pound-for-pound ranking, sharing the spotlight with female boxing ambassadors and future all-time greats Katie Taylor and Claressa Shields.

Some of those holdouts were members of The Ring Women’s Ratings panel, who drew a modest measure of social media ire when they refused to place McCaskill above Braekhus in the magazine’s pound-for-pound list after the first fight.

Now, not only did they become convinced that McCaskill has shown enough talent to become the new No. 3 in the list. They also agreed that Braekhus, as great as she may have been, has decayed enough to drop all the way to No. 7 in that same ranking.

“The version of Braekhus from 2011-14 was arguably the greatest female boxer of all time, but she’s a shell of her former self now,” said Mark Jones, who went as far as proposing to drop Braekhus from the pound-for-pound rankings entirely.

He was overruled by most of the panel, but the disappointment in Braekhus’ performance was nevertheless palpable.

“Without a doubt, Jessica McCaskill achieved a more resounding victory against Cecilia Braekhus than in their first fight,” said panelist Widalys Figueras-Snow, of Puerto Rico’s Boxeo con Lipstick website. “Braekhus has not been able to decipher the unorthodox style and the pressure McCaskill imposed on her. While I acknowledge Jessica’s will, and without taking one ounce of her credit from her, I agree that Braekhus may have had her best years, but her legacy in women’s boxing is undeniable.”

“I was disappointed by Cecilia’s performance,” said Irene Deserti, editor of Mexico’s Rincon Rojo magazine. “She looked worse than in the first fight. I assumed that this time she would have a clear strategy, against a Jessica who did not present changes in the version of her as a boxer,” concluded Deserti, in a sentiment echoed by boxing historian Malissa Smith: “(McCaskill) still needs a lot of work in the gym to tighten up her boxing skills, especially if she is aiming for a rematch with Katie Taylor.”

Braekhus remains at No. 1, Muzeya in at No. 5 at welterweight

As disputed as the vote may have been in the pound-for-pound issue, the agreement was unanimous in regard to the changes in the welterweight rankings.

In spite of her lopsided loss, Braekhus was still deemed worthy of holding on to the No. 1 position in the division, given not only her still respectable performance in her loss against McCaskill (and her solid job in their first encounter, which many observers thought Braekhus had won), but also given her extraordinary career as one of boxing’s best for more than a decade.

The newly opened spot at No. 5 was occupied by Zambia’s Lolita Muzeya, in another unanimous vote.