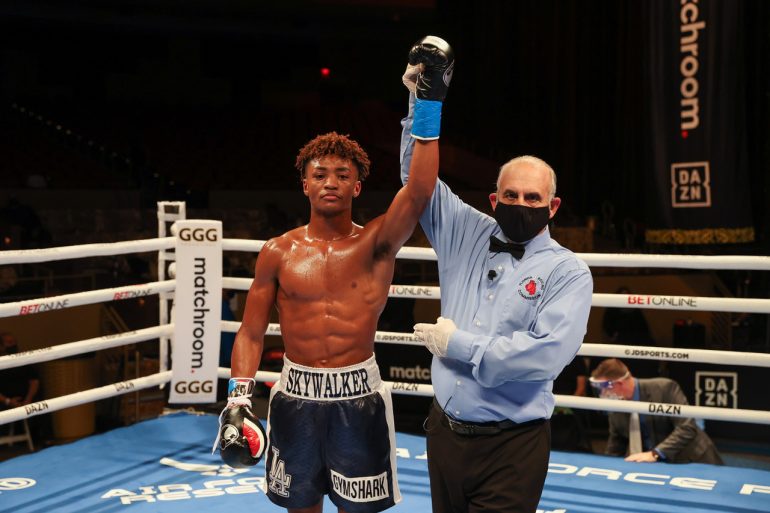 Jalen Walker victory over Diuhl Olguin during their bout on the December 18, 2020 Matchroom fight card in Hollywood, Florida. (Photo by Melina Pizano/Matchroom).
16
Mar
by Joseph Santoliquito

His eyes half-mast, Norman Walker shoved his gnarled hands into his pockets. His legs kept telling him to rest. His tired soul said otherwise. It fought the emotional pull toward fatigue, repeating loudly in his head, “No, you can’t let him down.” So, Walker would trudge forward, one step after the other in his grass-stained, work-worn boots and dusty gray overalls.

What mattered was reaching him, his son Jalen, in time to get to the gym, or take him to another tournament.

Seeing this through time, it instilled a no-quit attitude in Jalen “Sky Walker” Walker, a budding 19-year-old southpaw featherweight who is 7-0, with 6 knockouts and has a six-round fight coming up this Saturday against 37-year-old Argentinian southpaw Julian Aristule at the Airport Hilton, in Miami, Florida.

“There are some things as a kid that you never forget, like the time we didn’t have a car and me and my father would take the bus for an hour to the gym, then back,” recalled Jalen, who’s 5-foot-8 and comes from South Central Los Angeles, California. “I would always fall asleep on the bus, and my dad never fell asleep. I was around 11, 12 and maybe 75 pounds. We had no car then. I look back and I appreciate what he did.

“Let’s just say, I never had the thought of quitting. What my dad did was above and beyond. My relationship with my father is not perfect, it’s not the ideal American TV show, but I understand what he did for me and I have to repay him some kind of way.” 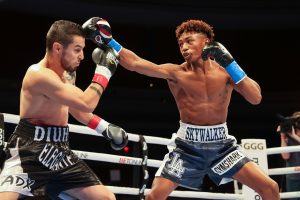 Symonds is a manager in the music industry and built multiple businesses. Kwan is an entrepreneur who was in the fashion world. At the strong behest of Abdullah, they’ve invested in Walker.

“We’re really doing this to build a better life and a brand around Jalen, so he can have a better life. This means a lot to us,” Kwan said. “It is not just business. This is more than dollars and cents. Coach Jamal is like an uncle to Rene and myself. Jalen is our only client.

“I first heard of him when I was hitting a heavybag and coach Jamal said, ‘I have this kid, you have to look at him.’ Jalen is composed for such a young kid. He has a composure and charisma about himself that you can’t out a finger on. He was raised by a single father who instilled in him great basic values. The byproduct of those values is that Jalen doesn’t want money, he wants to be great.”

“We actually met Jalen very naturally and we met Jalen’s father in late 2017, and we liked what we heard,” Symonds said. “It’s very obvious when you first meet Jalen that he’s a natural talent. Stylistically, he has a real California, Mexican influence. Coach Jamal inserted a Northeast style. There’s something special about Jalen.”

Jalen has an estranged relationship with his mother. For a seven-year period, Jalen never saw his mother.

Norman was not about to ignore his blood. Norman should know. He never had his father in his life. Norman started Jalen boxing when he was seven. He’s a squat, big-shouldered, thick man who for years grinded as a gardener in the Lynwood Unified School District is located in Lynwood, California.

Jalen and Norman were two peas in a pod. They went everywhere together. When their car broke down and the bills got heavy, Norman was able to turn to his mother, Rose Carter, for help. Jalen was as much her son and he was Norman’s.

“No one was ever going to take my son away from me, and through the years, I would hear all of these things how great a job I did with Jalen, and I would always stop them and say, ‘I’m just doing what fathers are always supposed to do,’” said Norman, who’s a track driver and Jalen’s co-trainer with Abdullah. “I never knew my father. He was killed in a gun fight at a bar in Compton. My mom was right there and saw it. I was 10 months old. I never knew my father.

“I always promised myself that if I had a son, I would always be there for him, because I never had a father in my life. It’s why I’m on Jalen about his friends and where he hangs out. I made mistakes when I was young. There was no way Jalen was going to make those same mistakes.”

One time Jalen was staying with Rose and the Bloods were using a local abandoned building as a crack house.

“That ended fast,” Jalen said. “My dad came from the street life and there was no way he wanted me around that. He instilled discipline in me. I’m 19 and I was fighting through grade school and high school. Boxing was and is my life. I would go to pizza parties; I couldn’t eat the pizza. If I went to a birthday party, I couldn’t eat the cake.

“It gave me my mindset. Boxing took away that I was poor, but it also took away the time of being a kid. It’s the sacrifice you have to make if you want to be great. In boxing, you don’t do it half-speed. You’re either all in or you’re all out.”

Because of his age, Jalen’s first six fights took place in Tijuana, Mexico. His first fight in the United States came in a six-round unanimous decision over Diuhl Olguin in December 2020.

“I think I’ve seen everything, especially sparring at Wild Card,” said Jalen, who has over 137,000 Instagram followers, including Ryan Garcia. “I want to win a title by the time I’m 20 years old. Nothing older than that. There aren’t many teenaged champions. My goal is to make history.”