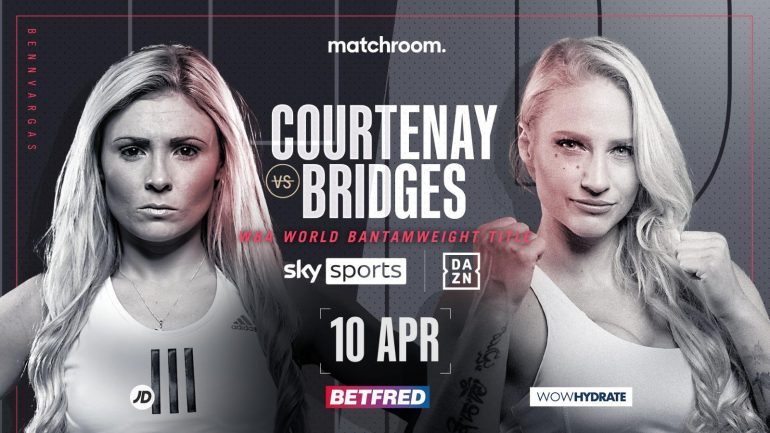 The 10-round bout will take place at a venue to be determined in the U.K. and will precede the main event between unbeaten welterweight Conor Benn and Samuel Vargas. Both fights will air on DAZN in the U.S. and Sky Sports in the U.K.

The WBA mandated that this matchup will be for their vacant female bantamweight title, a decision that has come under scrutiny. Both fighters have had just 12 pro bouts between them and one win a piece over an opponent with a winning record.

Courtenay (6-1, 3 knockouts), who resides in Watford, England, was originally scheduled to face Rachel Ball in a rematch of their August 14 clash. Ball won that bout via unanimous decision but was unable to take the rematch because she’s still recovering from the effects of COVID-19.

“I was gutted to hear Rachel had pulled out, but safety comes first, so I wish her a speedy recovery and look forward to when we do have that rematch down the line,” said Courtenay, who was dropped in the opening round against Ball. “All that’s changed is the opponent, the outcome is still the same, and on April 10 I will be crowned world champion.

“We‘ll put on a great, non-stop action fight for the fans, but I’m more determined and focused than ever. That world title is staying in the UK.”

“I’m very excited to be the first female from Australia fighting on a Matchroom card,” said Bridges. “When (promoter) Eddie (Hearn) contacted me, it was really unexpected, but I’m not going to say no to this chance.

“I was gutted for Rachel as she’s a friend and I wish her well in recovery, but opportunity knocks. This is a fight that fans have spoken about for a while now since I moved onto the British scene. I respect Shannon as a boxer, I think we’ll put on a great show, but I’ll be the one leaving with the gold.”

Francisco A. Salazar can be reached by email at [email protected] or on Twitter at @FSalazarBoxing.