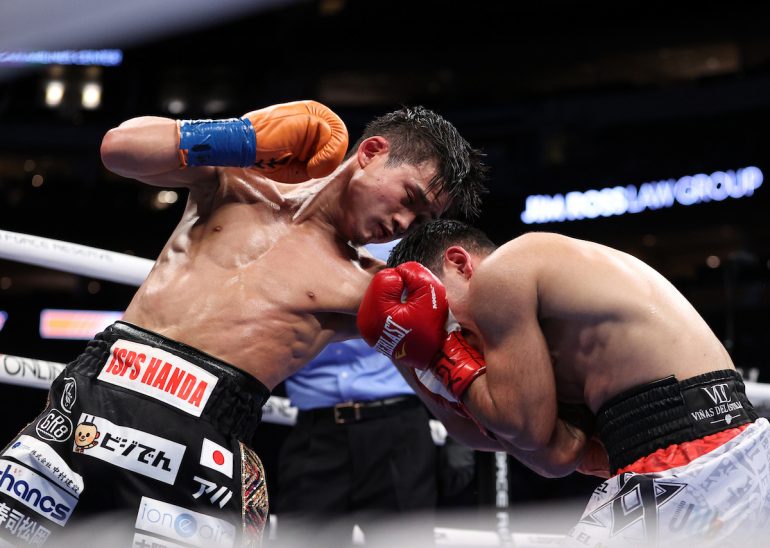 Kyoguchi (left) was too much for Vega. Photo by Ed Mulholland/Matchroom.
13
Mar
by Doug Fischer

DALLAS – The U.S. debut of Japanese standout Hiroto Kyoguchi came to an abrupt end when his opponent, the diminutive but determined Axel Vega, injured his right hand in the fifth round of their junior flyweight championship bout on Saturday at the American Airlines Arena. The scheduled 12-round title bout was on the undercard of the anticipated Juan Francisco Estrada-Roman Gonzalez rematch.

Kyoguchi (15-0, 10 KOs) retained his Ring Magazine and WBA titles with a fifth-round technical stoppage when referee Raul Caiz Jr. quickly determined that Vega (14-4-1, 8 KOs) was unable to continue. Prior to the stoppage, Vega, a 20-year-old scrapper from Ensenada, Mexico, was giving as good as he got from the two-division titleholder.

The Japanese champion elected to stay in the pocket with the 4-foot-9 pressure fighter for the majority of the four and half rounds the battled, treating the socially distanced crowd (and the fans watching the live DAZN stream in the U.S.) to heated trench warfare.

Kyoguchi landed the more accurate body shots and uppercuts, while the busier and seemingly physically stronger Vega attacked the Tokyo resident’s midsection and landed overhand rights. One of those rights apparently landed the wrong way midway through Round 5. Vega immediately turned away in pain as Kyoguchi instinctively closed the distance and clocked him with a right hand before Caiz waved the bout off at 1:32 of the round.

Kyoguchi, now one fight into a multi-fight deal with Matchroom Boxing, will now turn his attention to unifying the loaded 105-pound division. The Ring/WBA champ’s targets are countryman Kenshiro Teraji (the WBC titleholder and Ring’s No. 1 contender), Nicaragua’s Felix Alvarado (IBF, Ring No. 2) and Mexico’s Elwin Soto (WBO, Ring No. 5).

The 27-year-old slugger should make for fun fights regardless of who he fights, as evidenced by the tougher-than-expected scrap with Vega. 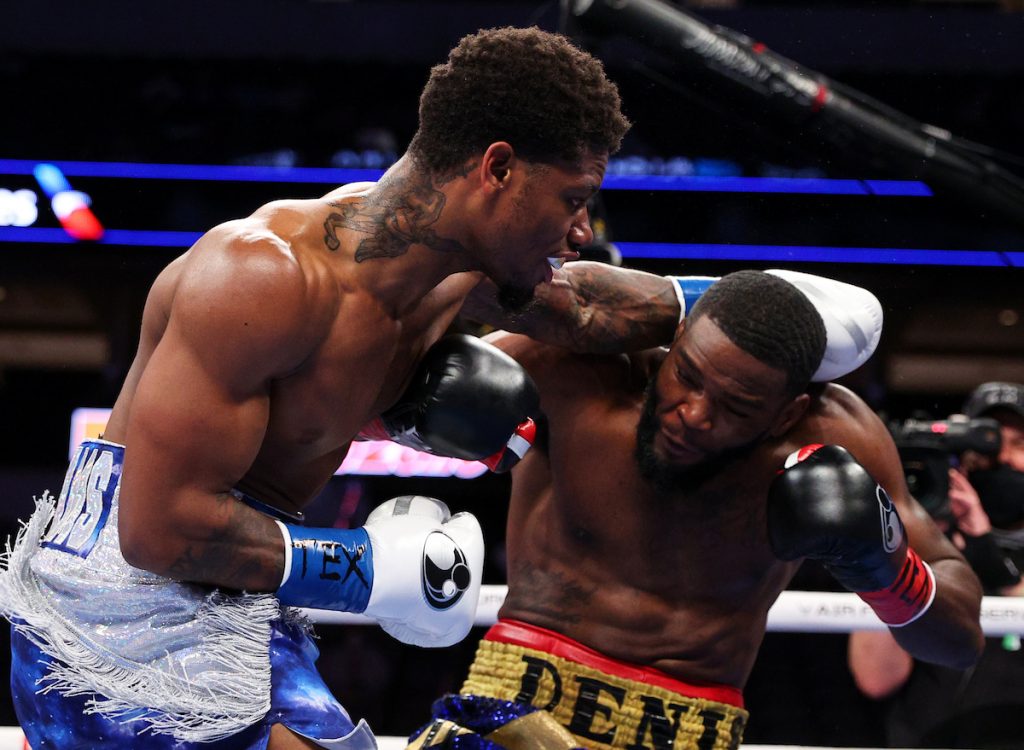 On the undercard, middleweight prospect Austin Williams won his crossroads clash with gatekeeper Denis Douglin via hard-fought eight-round decision (79-73, 79-73, 77-75), proving to be an ambitious up-and-comer worth keeping an eye on.

Douglin (22-8, 14 KOs), a 32-year-old veteran who had battled the likes of George Groves and David Benavidez at super middleweight, represented a big step up in competition for the 24-year-old latecomer from Houston, but Williams (8-0, 6 KOs) dominated the first four rounds with his blazing speed and combinations.

Douglin, a Las Vegas-based Brooklyn native, broke through with power punches of his own in Round 5 and tested the tiring younger man down the stretch of the fight, but despite his fatigue, Williams landed the bigger shots (rocking Douglin with hooks in Rounds 6 and 7).

The opening bout of the Matchroom USA/DAZN presentation was an entertaining eight-round scrap between unbeaten featherweight prospects, which ended in a split draw as the superior speed and ring generalship of Camden, New Jersey’s Raymond Ford was not enough to contain the aggression and combination punching of Aaron Perez. Scores were 78-74 (Perez), 77-75 (Ford) and 76-76.

Ford (8-0-1, 4 KOs) was the more accurate puncher for much of the hotly contested bout, but Perez (10-0-1, 6 KOs), from Albuquerque, New Mexico, had his moments whenever he was able to bull Ford to the ropes. Perez’s pressure and volume dropped after five rounds and Ford took command of the action when it shifted to the center of the ring. Most ringsiders thought Ford deserved a close decision, but the split-draw is a good learning experience for the talented southpaw who needs a more consistent jab and not rely so much on covering up for his defense (which he did too often whenever Perez backed him to the ropes, it’s not a good habit).