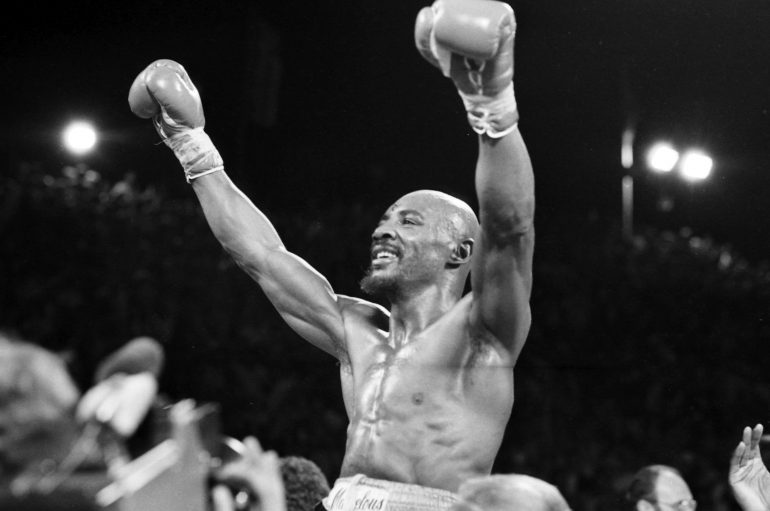 Photo from The Ring archive
13
Mar
by Tom Gray

The former undisputed middleweight champion of the world Marvelous Marvin Hagler reportedly passed away on Saturday, according to numerous sources. This devastating news was confirmed by his wife, Kay, via an official fan club Facebook account and it has gone viral on social media.

Hagler, arguably the greatest middleweight of all time, is one of the most beloved and respected champions of the modern era. Born in Newark, New Jersey in 1954, he turned professional in May 1973. With a limited amateur career behind him, “The Marvelous One” learned on the job, fighting mainly in the Massachusetts area before establishing himself as a dominant force within the fiercely competitive boxing hot bed of Philadelphia. His victims included Bobby “Boogaloo” Watts, Willie “The Worm” Monroe, Eugene “Cyclone” Hart, Bennie Briscoe and Sugar Ray Seales.

Literally terrifying as a contender, the switch-hitting Hagler was unapologetically avoided by more than one world champion, however, he was finally granted a title shot by durable Italian American Vito Antuofermo in November 1979. Most ringsiders felt the challenger had done enough to lift the championship, but Antuofermo retained on a split decision draw.

The following year, Hagler was given another shot, against Britain’s Alan Minter, and this time he left nothing to chance. Minter was destroyed inside three rounds and so began one of the most dominant reigns in middleweight history. Hagler slaughtered the entire division, posting knockout triumphs over Felgencio Obelmejias, Antuofermo, Mustafa Hamsho, Caveman Lee, Tony Sibson and Wilford Scypion.

Panamanian legend Roberto Duran was the first fighter to take Hagler the distance in a world title defense, but the great champion would go on to cut short the challenges of Juan Roldan, Hamsho (in a rematch), Thomas Hearns and John “The Beast” Mugabi. The Hearns triumph, a timeless and unforgettable classic, remains the benchmark against which truly great fights are judged.

Hagler’s final bout was a 12-round split decision loss to Sugar Ray Leonard in April 1987. Disgusted by the decision, he would never put on a glove again.

Elusive as an interviewee, the great former champion retained an almost royal majesty among fight fans and he was absolutely adored. Hagler (62-3-2, 52 knockouts) will forever be remembered as one of the Four Kings alongside Duran, Leonard and Hearns. However, he will always be what he said he was, simply “Marvelous.”

The Ring would like to extend thoughts and prayers to the family and friends of one of the greatest fighters of all time.