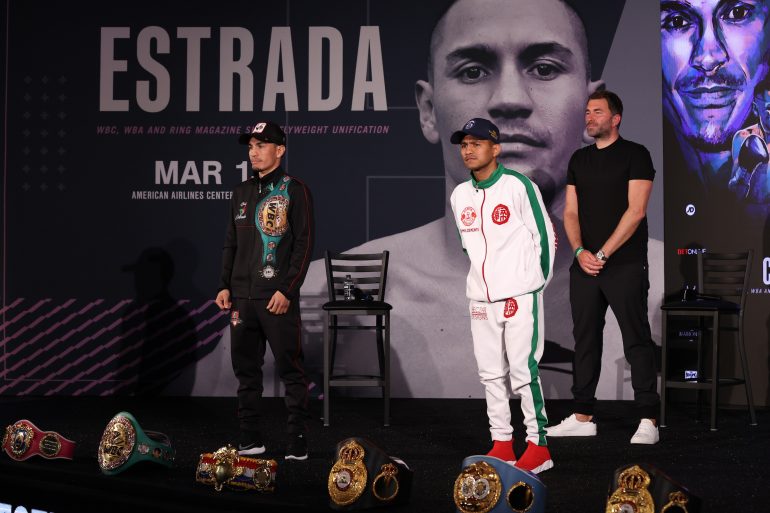 Juan Francisco Estrada speaks during the final press conference ahead of his rematch with Roman Gonzalez. Photo by Melina Pizano/Matchroom.
12
Mar
by Dan Rafael

It has been more than eight years since Juan Francisco Estrada, a relatively unknown at the time, dropped down from flyweight to junior flyweight to challenge Roman “Chocolatito” Gonzalez, who was 33-0, for his world title.

The bout took place on Nov. 17, 2012 at the Los Angeles Sports Arena – which has since been demolished – and was a memorable fight of the year contender that Gonzalez won by highly competitive unanimous decision. Estrada and legions of diehard boxing fans have pined for a rematch since, and now it is finally happening.

Estrada and Gonzalez will meet to unify their junior bantamweight world titles – as well as vie for Estrada’s Ring magazine title – in the main event of a Matchroom Boxing card on Saturday (DAZN and PPV, 8 p.m. ET) at the American Airlines Center in Dallas.

Estrada could not be happier that the rematch is finally at hand. 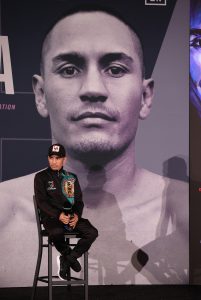 Estrada at the final press conference for his rematch with Gonzalez. Photo by Ed Mulholland/Matchroom

“I’ve only had three losses in my career. I was able to avenge two of those and it’s been (almost) nine years since our last fight and a lot of people have been waiting – my team, fans, myself and I’m very just very happy that it’s going to happen,” Estrada told The Ring.

Besides the loss to Gonzalez, Estrada dropped a majority decision in 2018 challenging Srisaket Sor Rungvisai for the junior bantamweight belt he had taken from Gonzalez. Estrada edged him by unanimous decision in a 2019 rematch to take the belt (and the vacant Ring Magazine title). Estrada also lost an eight-round decision to Juan Carlos Sanchez Jr. in 2011 but avenged the defeat by 10th-round knockout later that year.

So, why has it taken so long for Estrada to get another crack at Gonzalez, especially since they have long been established as premier smaller-weight fighters, who have shared a round-robin with Sor Rungvisai and Carlos Cuadras?

“Roman was asking for $1 million, $2 million back then for the rematch and we would have done it but that’s something that has to do with the promoters and the promoters were unable to get that done in the short term,” Estrada said. “Now that so much time has passed he was able to get his million dollars and we could finally do the fight.”

Revenge is on his mind even though he and Gonzalez have become good friends over the years.

“It’s a big opportunity – the two belts, the Ring magazine title,” he said. “But the biggest motivation for me is to avenge the loss. It’s the biggest thing that’s driving me at this moment.”

Estrada (41-3, 28 KOs), 30, of Mexico, believes he has matured as a fighter since their first bout. He also said he is no longer plagued by weight issues he said hampered him the first time around.

“First of all, I’m a more experienced fighter. Both Roman and I are,” said Estrada, who is 15-1 since meeting “Chocolatito” the first time. “Back then the weight really affected me at junior flyweight. It was hard for me to make weight. It was something that really affected me. It was a risk but it was an opportunity and I think now with everything that has happened this fight will be at a category where I can do much better.” 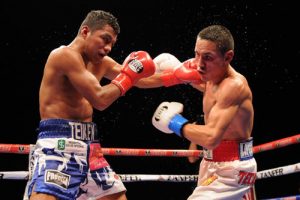 Estrada (right) and Gonzalez went to war in fight one.

complaint about the rightful winner, even though he was perturbed by the one wide scorecard.

“I was a new fighter and it was the first fight I had in the United States and he was the champion, so I knew I had to throw a lot of punches and possibly even knock him out,” Estrada said. “I couldn’t wait for the decision because we saw how the judges scored it. After watching the fight I think the judges gave him too many rounds but it’s understandable because he was the champ.”

In his first fight after losing to Gonzalez, Estrada won a split decision over Brian Viloria in 2013 to take his unified flyweight world title. He would go on to make five successful defenses, including against formidable challengers such as Milan Melindo, Giovani Segura and Hernan “Tyson” Marquez, before vacating in 2016 to move up to junior bantamweight, where he made an even bigger name for himself and long been considered among the top pound-for-pound fighters in the world.

Gonzalez (50-2, 41 KOs), 33, a legend in his home country of Nicaragua, followed a similar path as Estrada after their first fight, rising in weight to become a four-division champion by claiming titles at flyweight and junior bantamweight while also earning wide recognition as the pound-for-pound king from 2015 to 2017.

After Gonzalez won his second belt at junior bantamweight last March 12 by upset ninth-round knockout of then-undefeated Kal Yafai in a brilliant performance – after many had viewed “Chocolatito” as washed up – the talk for a rematch with Estrada really heated up, especially since they were now both aligned with promoter Eddie Hearn’s Matchroom Boxing. 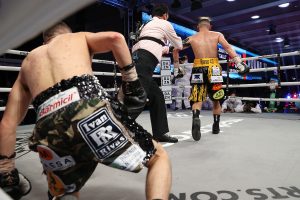 Carlos Cuadras attempts to get up from an 11th round knockdown scored by Estrada. Photo by Ed Mulholland/Matchroom.

In October, they each retained their titles on the same card in Mexico City, where Gonzalez outpointed Israel Gonzalez in the co-feature and Estrada knocked out Cuadras in the 11th round of their action-packed rematch that was a strong fight of the year candidate.

After those bouts, they posed for photos with each other, big smiles across their faces and their arms around each other. Soon after, Hearn was able to finalize the fight, in part because Sor Rungvisai, Estrada’s mandatory challenger, agreed to step aside.

“Everyone in boxing knows Estrada-Chocolatito is one of the fights of the year before the bell has rung – two legends, pound-for-pound greats, in a unification fight,” Hearn said. “This is everything that’s great about boxing. Juan Francisco wants to avenge his defeat and unify the division, but Chocolatito, who sprung back to life against Kal Yafai, has other ideas.”

And now they will do it again with anticipation sky high for another classic.

“I think it’s going to be the same or even better than the first fight,” Estrada said. “It’s a good weight for both of us. We’re both champions and I know he wants to win. I want to win as well. But it’s a better weight class for me and I’m going to go try and knock him out, obviously being smart. He’s going to try to make his fight but I think it’s going to be a good fight for the fans.” 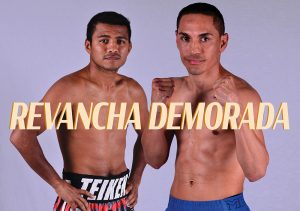 “We spent some time together. A fight is different than the friendship,” Estrada explained. “We don’t talk every day, however when I fight he wishes me well. Whenever he fights I wish him well. However, in the ring we are going to be enemies again. It’s just something that happens naturally when you fight.

“He’s a really humble fighter and obviously in the ring you fight, you exchange punches and there’s a little bit of violence, but I do consider him a friend outside the ring.”

He said the trip to see Gonzalez had nothing to do with an attempt to set up a rematch.

“It was very casual. He just invited me to come,” Estrada said. “It was three or four years ago. We really didn’t talk about the fight because friendship is different and we really didn’t see it as business. We really didn’t want to talk about it. Everybody was just enjoying that moment and I was on my path and he was on his path and it wasn’t really time to do that.”

Those paths cross again with Gonzalez already a shoe-in for the International Boxing Hall of Fame regardless of the outcome Saturday. Estrada, however, is seen by many as borderline with a win over Gonzalez going a long way to enhance his chances.
Estrada agrees with that assessment.

“I consider him to be a future Hall of Famer regardless of what happens in this fight. He’s a world class boxer and he’s a very complete boxer as well,” Estrada said. “Winning this fight, I don’t know if it necessarily gives me a path to the Hall of Fame. I see a lot of retired boxers that are in the Hall of Fame and I consider them the best of the best but I do think I can make history, especially in Mexico. Winning against him, maybe I can get in the conversation and considering there are a lot more guys from bigger weights, heavier fighters that are in there, maybe as a smaller fighter I can get in.”

If Estrada emerges victorious he said he would consider it the biggest win of his career. Of course, then they would be 1-1. So what about a trilogy?

“I think that would be great and the people would really like to see a third fight,” he said. “Depending on what happens in this fight I’d like to possibly go for all four (belts). Maybe one or two more fights in this weight class and then move up to bantamweight (to fight for a title), which has been my dream.”