Estrada and Gonzalez have earned the hype for their anticipated rematch 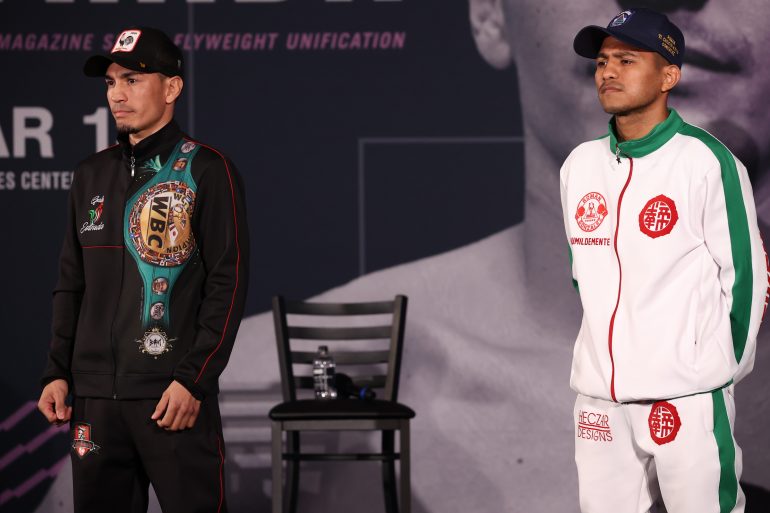 Juan Francisco Estrada and Roman Gonzalez pose after the final press conference ahead of their rematch on March 13. Photo by Melina Pizano/Matchroom.
11
Mar
by Doug Fischer

DALLAS – The anticipated rematch between Ring Magazine/WBC junior bantamweight champ Juan Francisco Estrada and WBA titleholder Roman Gonzalez, which takes place on Saturday at American Airlines Arena in Dallas (DAZN, 8:00 p.m. ET), is one of those rare matchups in which promotional hyperbole and cliché comments, such as “the fans will be the winners,” is perfectly fine.

Eddie Hearn, whose Matchroom USA is promoting the Estrada-Gonzalez II event, called it “One of the great fights of our generation” during the final press conference for The Ring championship tripleheader supported by the Jessica McCaskill-Cecilia Braekhus rematch and the U.S. debut of Japanese sensation Hiroto Kyoguchi.

That’s setting the bar pretty damn high, but it’s not pure promotional bluster given the combatants’ epic first fight and their respective accomplishments over the past eight years.

Four and half months after their first battle in November 2012, which Gonzalez, the defending WBA junior flyweight titleholder, won via unanimous decision, Estrada lifted the WBA and WBO flyweight belts from Brian Viloria. The Sonora native defended the titles five times, including impressive late stoppages against countrymen and former champions Giovani Segura and Hernan Marquez, as well as a decision over future beltholder Milan Melindo. 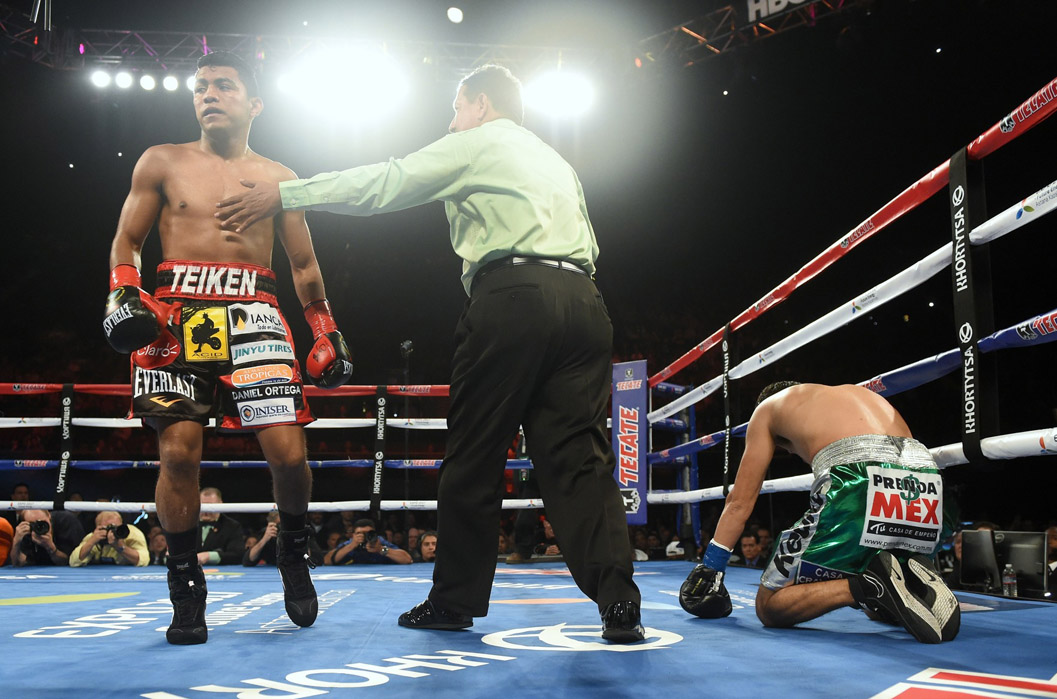 During Estrada’s flyweight reign (from April 2013 through 2015), Gonzalez climbed to the No. 1 spot in The Ring’s pound-for-pound rankings by winning the Ring/WBC 112-pound title from Akira Yaegashi in Japan and then defending the belts against former champs Edgar Sosa and Viloria on HBO and HBO PPV shows headlined by Gennadiy Golovkin in L.A. and New York City, U.S. markets and platforms that significantly raised the undefeated Nicaraguan’s profile among American fans and media.

In 2016, Gonzalez won his fourth world title in a fourth weight class by scoring a hotly contested unanimous decision over then-unbeaten Carlos Caudras (35-0-1), a victory that made Nicaraguan history but also inherited a WBC mandatory defense against Srisaket Sor Rungvisai. The Thai southpaw handed Gonzalez his first loss – via a dramatic, hard-fought majority decision – in 47 pro bouts in March 2017, which set up September rematch that seemingly ended the stellar career of Chocolatito when Sor Rungvisai scored a brutal fourth-round KO. 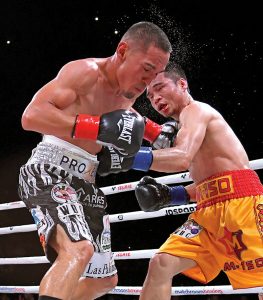 Estrada earned a mandatory shot at Gonzalez’s nemesis with a razor-thin unanimous decision over Cuadras in the co-feature to Sor Rungvisai-Gonzalez II. The Mexican technician dropped a majority decision to the Thai tank in 2018 but rebounded by clearly outpointing Sor Rungvisai in 2019 (earning the vacant Ring title with the masterful performance).

Gonzalez (50-2, 41 KOs), who fought only once in 2018 and 2019 against lower-level opposition, resurrected his career last year by stopping undefeated WBA beltholder Kal Yafai in nine rounds and defending the belt with a unanimous decision over Israel Gonzalez (which earned him The Ring’s 2020 Comeback of the Year award).

Estrada’s most recent defense of the Ring/WBC 115-pound titles, an up-from-the-canvas 11th-round stoppage of Cuadras last October, was a 2020 Fight of the Year candidate.

Which, of course, brings us to Saturday’s showdown, which pits a future hall of famer in Gonzalez, who has regained his formidable volume-punching, pressure-fighting form under the guidance of trainer Marcos Caballero, against an elite-level boxer-puncher who can clinch his ticket to Canastota with a revenge victory. 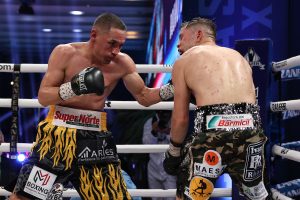 Estrada is the first fighter to ever stop Carlos Cuadras. Photo by Ed Mulholland/Matchroom

After years of being overlooked by U.S. fans and boxing media (when he was arguably Mexico’s best boxer – no offense to Canelo Alvarez), Estrada (41-3, 28 KOs) is currently (finally) in the pound-for-pound rankings of The Ring, ESPN.com and the Transnational Boxing Rankings Board. But the 30-year-old veteran is not satisfied with that overdue recognition. He wants Gonzalez’s scalp.

“We waited a long time; I have three losses and I’ve already avenged two of them,” said Estrada, who avenged his first defeat, an eight-round decision to Juan Carlos Sanchez Jr., with a 10th-round stoppage in 2011. “I’m ready for this fight.”

Prior to the Sor Rungvisai rematch, Gonzalez had proven the ability to nail a return bout, as he did vs. Francisco Rosas, who gave him a tough 12-round challenge for the WBA strawweight title in Mexico in early 2009 but was crushed in two rounds when they met again at junior flyweight in 2010.

Levi Luna, the sports director for the Nicaraguan network TeleNica, has covered Gonzalez’s entire pro career. He believes former protégé of Alexis Arguello has miraculously recaptured the hunger and spirit that carried him to his first world title (won with a fourth-round drubbing of Yutaka Niida in September 2008).

“I’ve never seen him with the motivation that he has now,” Luna told The Ring after Thursday’s press conference. “His mindset and training camp for this fight has been perfect. Everybody around him, led by Marcos Caballero, is focused on their shared goal.”

Gonzalez’s preparation seems to be the key to his successful comeback.

“I thought he had lost his desire to train like a champion well before he lost to Sor Rungvisai,” said German Garcia, sports editor for the Nicaraguan newspaper La Prensa. “I recall interviewing him prior to the Viloria fight and he admitted that he was ready to retire. He said he was tired of boxing and admitted that he wasn’t training like he used to.”

Time away from the grind, his union with Caballero, which began with the Moises Fuentes fight in 2018, and the Caballero-run training camps in the Coachella Valley, appear to have recharged Gonzalez’s batteries as well as his desire to stay in shape between fights. 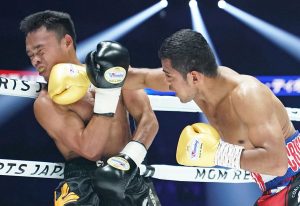 “I saw it after the (Diomel) Diocos fight in Japan (in December 2019),” said Luna. “He had a full camp for an eight-rounder with a journeyman that lasted two rounds, but immediately after the fight he flew to Nicaragua and kept training at his home. He kept his weight down over the holidays because he knew he had a title shot with Yafai in February. He reported to Coachella in January, ready to train hard.

“He and Marcos have clicked. Marcos got in his mind. He didn’t try to change many things with Chocolatito, but he gained his trust. That’s one of the main things that led to the comeback and this rematch.”

Gonzalez exudes the quiet confidence a veteran fighter earns with a smooth camp.

“We are ready for this fight,” he said (softly and respectfully, as always) during the final presser. “I’m very conscious it’s going to be a beautiful fight. Juan is a good champion, and we know what we have to do.”

Estrada, by all reports (and by the look of his ripped physique), has also had an excellent camp.

“This is going to be better than the first one,” he said. “It’s going to be a war and the people watching will be the real winners.”

Yes, that’s a cliché thing to say in boxing, but we know “El Gallo,” just like Gonzalez, isn’t one to bulls__t the public. They say what they mean and always back it up in the ring.

Fans, boxing media and odds makers are split on who should be viewed as the favorite. Perhaps there shouldn’t be a favorite in this clash of little titans. Maybe we should all just sit back, appreciate what the fighters have done to get to this juncture in their careers, and simply enjoy this one.