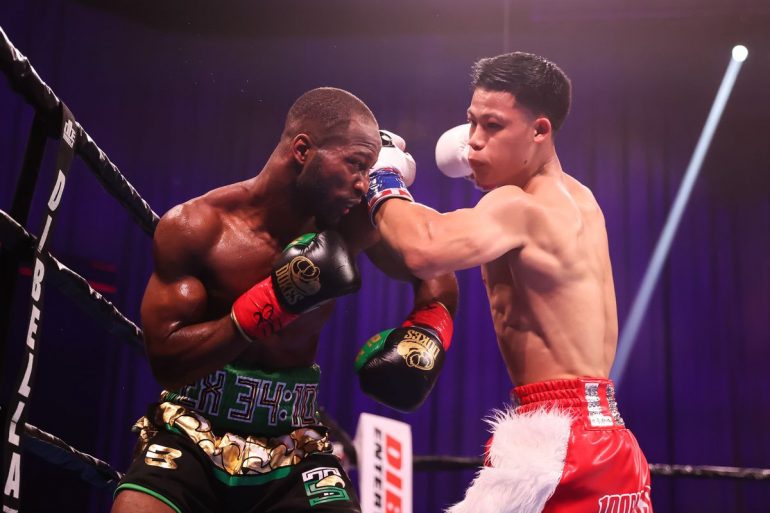 If Samuel Teah was “The Tsunami,” Brandun Lee proved to be “The Typhoon.”

The undefeated Lee, a fast-rising junior welterweight prospect, made an emphatic statement in the main event their 10-round Showtime-televised main event, Wednesday evening, at Mohegan Sun Arena, in Uncasville, Connecticut, knocking Teah out cold with a thunderous counter right hand.

On paper, the Liberian-born Teah was supposed to serve as the toughest test of Lee’s career to date. And for the first two rounds, it appeared that was the case.

In an interview with The Ring leading up to the bout, Teah claimed he would beat Lee down with the jab en route to an upset knockout.

While he did not win the fight, Teah did manage to get Lee’s attention in Round 2. He landed a solid right hand and followed up with a jab that stopped Lee in his tracks.

However in the third round, Lee (22-0, 20 knockouts), a 21-year-old based in La Quinta, California, exemplified that it was only a small delay from the inevitable.

A flurry sent Teah to the canvas and the 33-year-old never recovered. With his adversary on unsteady legs, Lee stepped on the gas pedal and was relentless, forcing Teah to exchange.

And while the Philadelphia-based Teah connected with a left hook, a counter right hand from Lee knocked him unconscious the moment the shot landed.

In a heap, Teah (17-4-1, 7 KOs), who suffered the first knockout loss of his pro career, crashed to the canvas, prompting referee Johnny Callas to immediately call for medical attention instead of issuing a count.

“I knew the knockout was going to come and that one was definitely one of my top one or two favorites so far in my career,” Lee added.

With the win, Lee, who won four junior Golden Gloves Championships to go with an outstanding amateur record of 181-9, notched his 13th consecutive knockout victory.

In the chief support bout, at junior lightweight, Jordan White (11-1, 9 KOs) handed Misael Lopez (11-1, 5 KOs) his first loss as a pro via sixth round stoppage. The 24-year-old Lopez was dropped twice in the sixth before referee Arthur Mercante Jr. halted the action.

To round out the remainder of the undercard, 135-pounder Steven Ortiz (12-0, 3 KO) outpointed Jeremy Hill (14-1, 9 KOs) over eight rounds to remain unbeaten. Victor Padilla (9-0, 8 KOs) recovered from an early knockdown to stop previously unbeaten Thomas Velasquez (10-1-1, 6 KOs), in the fifth round of a lightweight contest. Padilla was dropped with a right hand to the body in the opening frame but dropped Velasquez with a barrage of shots and his opponent never recovered.