Where have you been, Alejandro Luna? 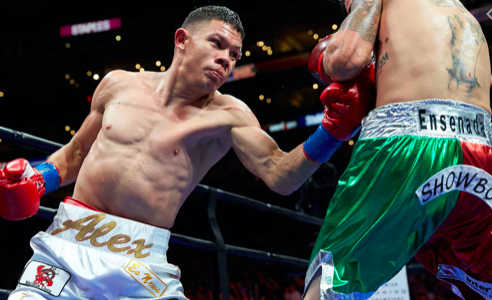 It’s been three years since we last saw Alejandro Luna in a ring. You’d be forgiven if you didn’t recall the outing, it was a loss, on March 10, 2018 to Richard Commey.

Luna, a California resident, came in with momentum. He received the honor of being named PBC fighter of the week for the first week of April in 2017, and the text accompanying the promo video showing highlights of his skills said, “Alejandra Luna only knows how to fight one way, and that’s the Mexican way. He’s heavy handed, throws punches in bunches and never stops coming forward. For that reason, he’s one of the most exciting prospects in his division.”

The lightweight had edged up the ranks, taking Ws from 40-16 Cristobal Cruz and then 19-8 Sergio Lopez, 33-7 Jose Alan Herrera and then 13-1 Naim Nelson. That was maybe a coinflip fight, and he prevailed.

A stepup versus Andrey Klimov got booked for April 9, 2017, and Luna passed that test, too.

Next came another step-up, this time Richard Commey stood in front of the lightweight prospect/contender, and the winner would get a crack at the IBF titlist.

The Whittier, CA native, who goes by “Alex” to many folks, came from a cowboy family, dad did rodeo. So he grew up with horses in his backyard, but he picked fighting over riding. Luna boasted a 90-12 record as an amateur, turning pro in 2010, as a lightweight. He’s used the nickname “El Charro,” which means “Mexican cowboy.”

Luna seemed amped for the opportunity coming in. “It feels great to be on this stage. I’ve been doing this since I was nine-years-old so the time is now. I’m ready to take full advantage of this,” he said during fight week. “Training camp was great. The only bump we had was the postponement of the fight, but we slowed it down a little bit so we could peak at the right time. I’m ready to go. Richard Commey comes from a rich boxing background and those fighters from Ghana are all known for coming forward. I think our styles are really going to clash nicely. The real winner of this fight is going to be the fans.”

Especially Commey fans; the Ghana boxer connected with leads, and with counters, he was quicker to the punch. It’s not like Luna looked so out of his depth, but Commey was on. You saw moments when Luna realized he needed to change the tone, and he’d back up Commey, to the ropes. But you also saw Commey push off on Luna, and Luna fall on his butt. Was the Ghanian really that much stronger than Luna? It happened twice,  and the second time the ref warned Commey, but you look back on the fight, and it makes you wonder what was going on. He was getting fatigued, it turns out. A left hook put down Luna in round six, the first time he’d been downed in a pro bout. A right cross stung him, a right hook hurt him more and a hook to the body sent him on his butt.

Luna tried to fight back, he knew he’d need to ride hard through the storm. Action re-started, a right hand landed flush on his chin, a left hook added some pain, and down he went, again. The referee called a halt at 1:54 of the sixth. 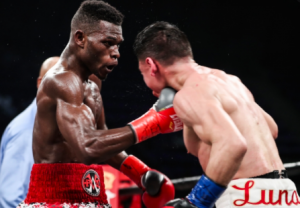 So, now the truth can be told?

What happened that night, when Luna took his first loss as a pro?

“I nearly killed myself to make weight at that point, I really couldn’t make 135 anymore. My body outgrew that weight class. I had been a lightweight since my amateur days, ten years to that point. I take nothing away from Commey, great fighter, great champion. I just believe the fight would’ve had a different outcome if it weren’t for me draining myself to make weight. It would’ve been a 12 round war, no doubt. If you saw the first five rounds it was turning out to be a great fight, toe to toe, but after four rounds I knew my legs weren’t there anymore.” OK, that explains him being shoved to the mat by Commey.

“Not too mention the day of the fight, that morning to be exact, I ran to lose two pounds due to the IBF’s 10 pound rehydration rule. To be honest, that fight shouldn’t have happened due to my struggles but I’m a warrior and there was too much on the line for me not too fight!”

“We’re moving up to 140,” Luna shared. “I’m under the tutelage of Arnold Barboza Sr, who has his son Arnold Barboza Jr.” He also relates well with the matchmaker John Beninati. “We’re training hard and ready to give exciting fights in the junior welterweight division! There should be exciting fights out there, due to my style. I love to mix it up and I’m never in a boring fight!”

OK, so he had some time off. Was it a question of Luna getting down on the sport?

“It wasn’t the loss that made me leave the sport, it was more of a mental thing,” he told me. 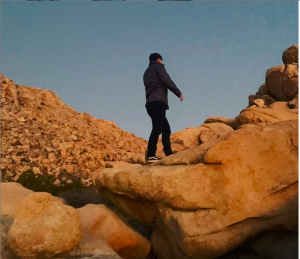 Luna took time off from the sport, and looked into his own heart and soul and realized, yes, boxing is what I do and who I am. He’s now ready to re-start the process, and make a run for a crown.

“Every great fighter has lost and came back and gave great fights after and even won titles. The time off made me realize that this is what I love to do. The hunger is there, the work ethic is there. I’ve been doing this since I was eight years old. I’m anxious to get back in the ring and give exciting fights! I’m just starting back, I want to fight the first fight back at 147.”

I pressed him, is there anyone he’s looking hard at, that he’s gunning for? “Then, I’d like to fight Ryan Karl (an 18-3 Texan who lost to Mario Barrios in his last outing). And then the sky is the limit.”