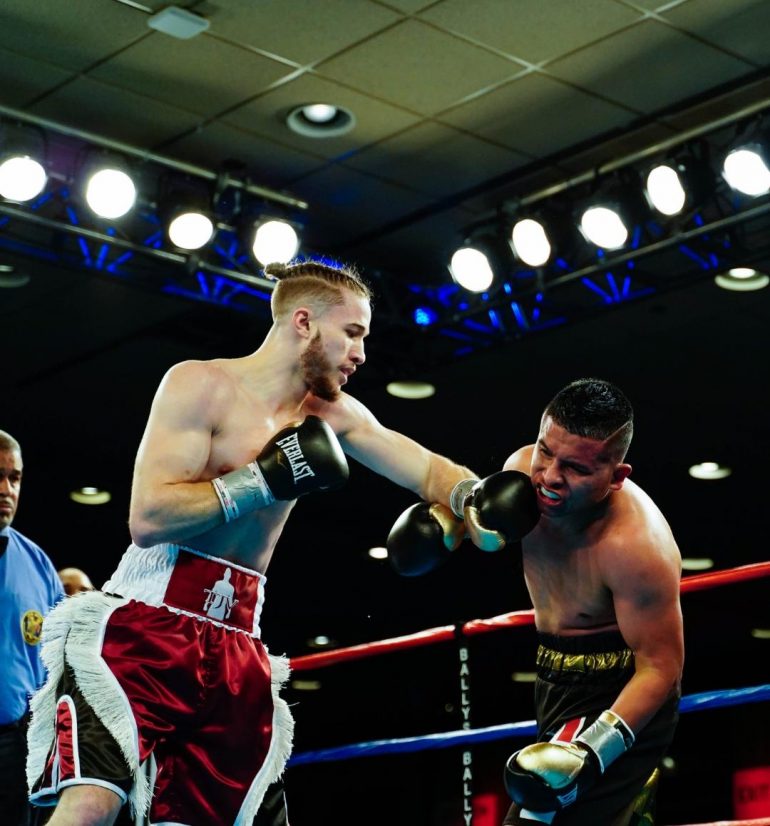 Thomas Velasquez will be fighting for the second time in four years, taking on a stiff challenge in undefeated Victor Padilla on Showtime's ShoBox Wednesday night (Photo courtesy of Showtime).
09
Mar
by Joseph Santoliquito

Thomas Velasquez is about to fight for the second time in the last four years Wednesday night (9 PM ET/PT) as part of Showtime’s ShoBox: The New Generation show from the Mohegan Sun Arena in Uncasville, Connecticut. For roughly over three years, “TJ” had a different calling and a more important title than being called world champion.

That title was “Dad.”

The 25-year-old Velasquez’s wife had twins girls in 2017 and he had to take the time to figure out what he wanted to do next. He never had any doubts about boxing, he just had to make sure his mind was right before he returned to the ring.

On Wednesday night, Velasquez (10-0-1, 6 knockouts) will take on Victor Padilla (8-0, 7 KOs) in an eight-round lightweight fight under the Brandun Lee-Samuel Teah 10-round junior welterweight main event.

In the meantime, Velasquez was making a living doing various side jobs, one of which involved working a flower seed machine, tedious work that one time required him to unjam the machine.

If not for his quick hands, Velasquez’s fight against Padilla may not be taking place at all.

“The worst was working a machine that placed flower seeds in little bags, and one time the machine got jammed and I put my hand into the machine to unjam it, and I almost lost my hand,” recalled Velasquez, who last fought March 7, 2020, when he took out journeyman Gustavo Molina in three, and before that, a six-round split-draw to Tyrome Jones in September 2017.

“I had about seven jobs in my time off. The worst was the flower seed job. I quit right on the spot and walked out. I could have lost my hand and no more boxing. When I went to unjam the machine, the machine started and it almost caught my hand. It scratched inside my palm and remembered moving my hand fast to get it out of there.”

There was, however, a lesson learned.

The time off made Velasquez find out how much he loved boxing.

“Not being in it, I didn’t feel like myself, and that’s being in the ring under the lights,” Velasquez said. “I couldn’t let my kids down. If I’m telling them to chase their dreams, they would have every right to question me why I didn’t pursue my dreams.

“My girls will turn four on March 15. It changes your life. It makes you think. I found out I could never let go of boxing. How can I tell them to do the right thing, when I didn’t chase my dream? Boxing is bigger than just throwing my hands.”

This is as much of a big fight for the southpaw Padilla as it will be Velasquez.

“I know Padilla is left handed a big puncher,” Velasquez said. “The time off has made me a smarter boxer than I was before. I won’t be just throwing my hands like a wild animal, like I did before.

“This is amazing being back. Everything I would complain about before, being tired, being hot, having to lose too much weight, or I was sweating too much, I don’t complaint about.