Frazier-Ali I is memorialized with a statue in Philadelphia 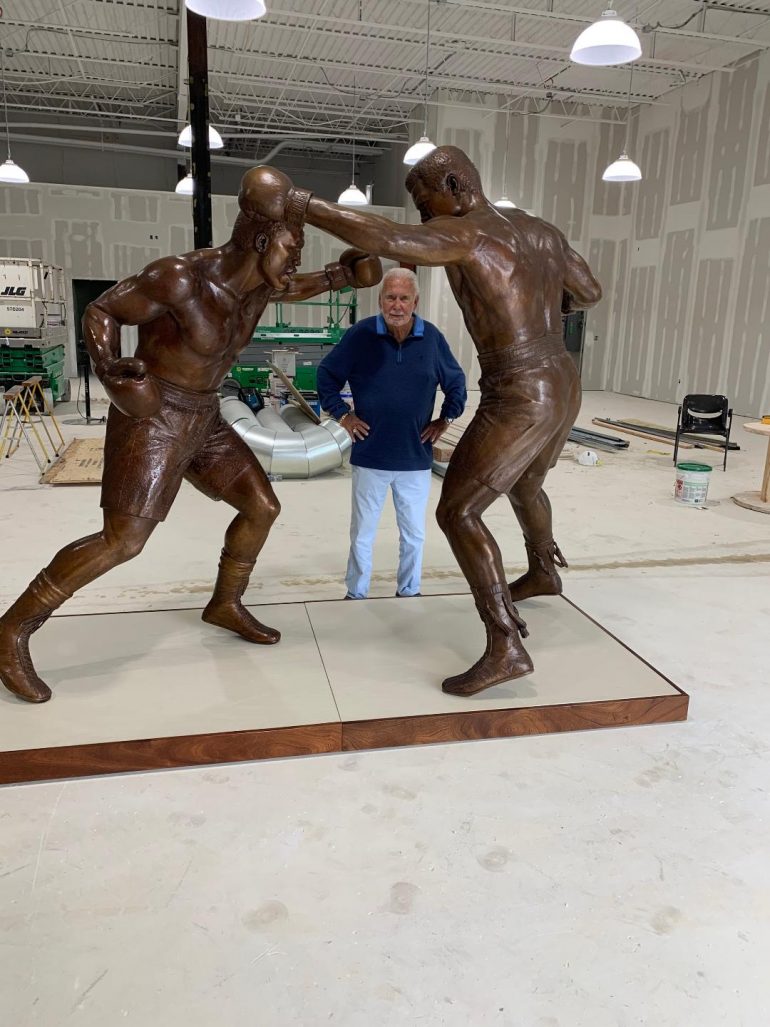 A statue commemorating the first fight between Joe Frazier and Muhammad Ali was unveiled on the 50th anniversary of Ali-Frazier I (Photo by Ike Richman).
08
Mar
by Joseph Santoliquito

Weatta Frazier Collins looked around to make sure no one was paying attention as the crowd began to disperse in front of the newly minted Joe Frazier-Muhammad Ali statue that was placed in the front window of the Joe Hand Gym in Feasterville, PA.

A contingent of media and members of the Frazier family were on hand to open Hand’s new boxing gym on Monday, and unveil a seven-foot bronze statue of Frazier hitting Ali 50 years to the day Frazier and Ali fought in “The Fight of the Century,” at Madison Square Garden in New York City on Monday, March 8, 1971.

When no one was paying attention, Weatta went up and kissed both bronzed figures in the chest.

“I had to,” said Weatta, one of Frazier’s daughters who was just 7 when the iconic fight took place between her father and “The Greatest.”

“It was emotional seeing both my father and Muhammad up there. I had to kiss both of them, because they both meant so much to so many people. I just wish my father was here (Joe passed away in November 2011) to see this. It would have meant so much to him that people respected him like this.” 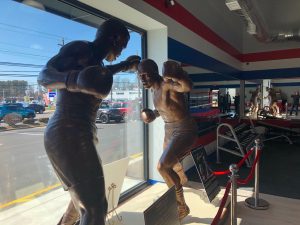 The Frazier-Ali I statue will sit in the window of Joe Hand Sr.’s new gym in Feasterville, PA.

For many years, all anyone in Philadelphia knew, or anyone visiting Philadelphia, knew the Rocky Balboa statue, which now stands by the side of Philadelphia Art Museum. The criticism for years, and rightfully so, was that a fictional fighter was immortalized and a true-to-life, salt-of-the-earth, all-time great like Joe Frazier was not.

Then, in September 2015, a 12-foot bronze statue honoring the Philadelphia boxing legend was unveiled outside of the Xfinity Live! entertainment area, in the center of the Philadelphia sports complex where the three arenas are based that house the Philadelphia professional sports teams.

On Monday, Joe Frazier went one up on the Rocky legend 2-1 on the scorecards with another bronze rendering, which was commissioned by noted local cardiologist Dr. Nicholas DePace.

“Joe Frazier is an icon and I’m so happy that Joe Frazier today is being honored, along with Muhammad, who will always be tied together,” DePace said. “They are the gold standard of sports and human history. This is a piece of art that looks so alive that you think they’re going to open their mouths and talk to you.

“I thank Muhammad Ali and Joe Frazier for their everlasting heritage and what they meant to boxing and the world. I have an amazing collection of sports memorabilia and my greatest pieces of my collection are the trunks they both wore that amazing night.”

Sculptor Chris Collins designed the work, with its base from Laran Bronze, Inc., of Chester, PA. The statue was originally commissioned by Dr. DePace for use in the future Philadelphia Museum of Sports, but will reside in Joe Hand’s Gym. 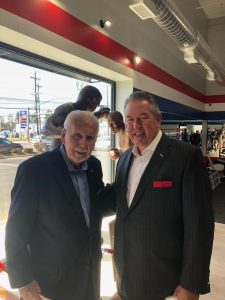 Joe Hand Sr. with his son, Joe Hand Jr., in front of the Frazier-Ali I statue, unveiled in Philadelphia on Monday, marking the 50th anniversary of “The Fight of the Century.”

Joe Hand Sr. was very close to Frazier for many years. Hand was ringside the night Frazier fought Ali.

“I always say that Joe wasn’t the greatest fighter in the world, but he had the greatest heart,” Hand said. “Ali would have had to kill him that night, Joe was so determined to win that fight. As a kid, I used to think you could put a bag over Willie Mays’ head and he would still catch fly balls on natural ability.

The statue will continue Frazier’s legacy.