Devin Haney-Jorge Linares bout agreed in principle for May 15 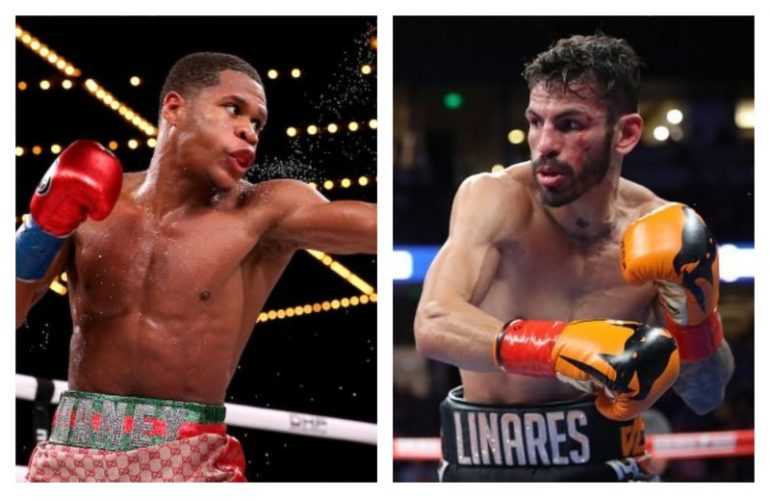 Devin Haney and veteran Jorge Linares clash on May 29 in Las Vegas.
07
Mar
by Ryan O'Hara

Devin Haney and Jorge Linares have agreed in principle to fight.

Haney, holder of the WBC title at 135 pounds, and Linares, a former three-division titleholder, will headline a Matchroom Boxing card on DAZN May 15 at a site to be determined.

Boxing Scene’s Dan Rafael was first to report the story.

Matchroom Boxing, Haney’s promoter, per Rafael, made an offer on the bout earlier this week to Golden Boy Promotions, Linares’ co-promoter, and both sides reached an agreement Friday.

Haney (25-0, 15 knockouts), who trains out of Las Vegas, will make the third defense of his title. He won an interim belt with a fourth-round knockout of Zaur Abdullaev in September 2019.

He was elevated to a full titleholder by default when former champion Vasiliy Lomachenko was upgraded to “franchise champion,” electing to face Teofimo Lopez Jr. rather than taking on a mandatory defense against Haney.

A Venezuela native based in Japan, Linares (47-5, 29 KOs), The Ring’s No. 7 rated lightweight, is on a two-fight winning streak since getting knocked out in the first round by Pablo César Cano in a massive upset back in January 2019.

But Haney, who is rated No. 3 by The Ring, is young, hungry, and determined to prove his worth. In his two title defenses, the 22-year-old blanked Alfredo Santiago despite injuring his shoulder and scored a near-shutout decision after recovering from shoulder surgery against former unified 126-pound titlist Yuriorkis Gamboa last November.