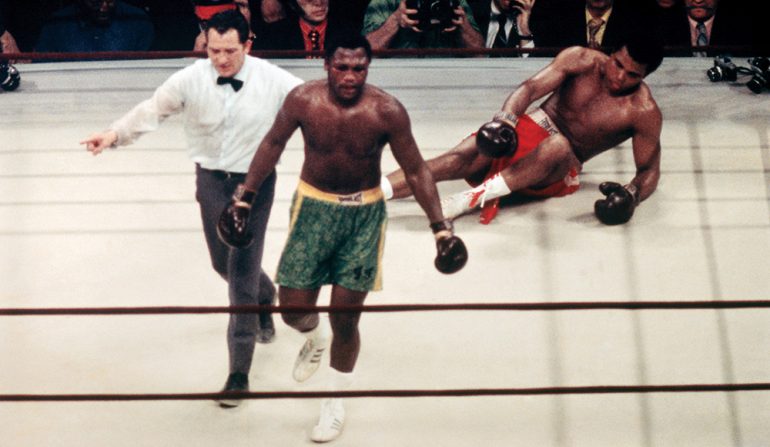 Joe Frazier (after scoring arguably the most iconic knockdown in boxing history) was The Ring's 1967, 1970 and 1971 Fighter of the Year. Photo: Ring Magazine / GettyImages
06
Mar
by Joseph Santoliquito

There were many fond memories WBC President Mauricio Sulaiman has of Muhammad Ali and Joe Frazier and their iconic first fight on Monday, March 8, 1971.

In memory of that classic war, the WBC has been holding special panel discussions remembering the fight, posting interviews with family members of the fighters and boxing experts, and had a special gala that was scheduled to celebrate the event, but due to the COVID-19 pandemic, that will take place virtually.

On Monday, the WBC will air a panel discussion with Hall of Fame promoter Bob Arum dedicated to the fight, and the fight will be discussed again Monday night on the At the Fights show on SiriusXM with Randy Gordon and Gerry Cooney. 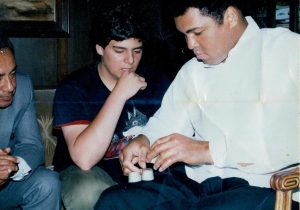 A young Mauricio Sulaiman sharing a priceless moment with “The Greatest,” Muhammad Ali (Photo courtesy of the Sulaiman family).

“Think about the last time you watched that fight. People today who weren’t even born when that fight took place have to see it. My father was there. But I didn’t see the fight until I was four or five years old.

“I watched that fight for the first time on a Betamax player with Muhammad Ali sitting on the sofa with me in family living room. I was fortunate to be graced with the great champion in my house. It’s 50 years ago that fight took place, and that’s something that I’ll never forget.”

After Ali retired, he had visited Mauricio and his father, Hall of Famer Jose Sulaiman, the former WBC President, in Mexico. Jose was working on getting health benefits for Ali. 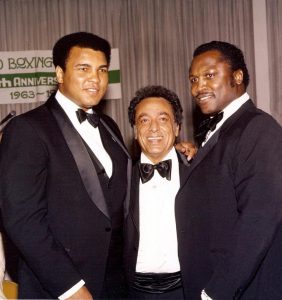 Mauricio Sulaiman’s father, Hall of Famer Jose Sulaiman, the former WBC President, was very to both Muhammad Ali and Joe Frazier (Photo courtesy of the WBC).

“I’ll never forget my father telling me to bring the champion upstairs to his study so he can pray just before we were having lunch,” Mauricio recalled. “I was a young kid, around 12. Muhammad asked me for some towels, and I got his towels. Then, Muhammad kneeled and prayed, but first, he asked me to point him to Mecca.

“Again, I was 12. I didn’t know. I pointed in a direction and Muhammad prayed. When he finished, we went downstairs and I told my mother how I pointed Muhammad to Mecca. She asked me where did you point. I showed her, then she said, ‘You idiot, you pointed to the north.’”

Then, Mauricio burst out laughing. 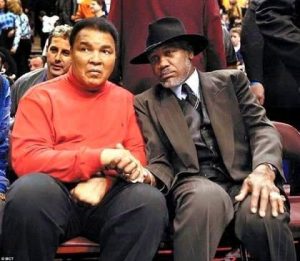 Muhammad Ali and Joe Frazier became friendlier in their later years (Photo courtesy of the WBC).

“That’s one of my greatest memories of Muhammad and through the years I got to know Joe, who was a wonderful man,” Mauricio said. “They both did so many good things for boxing and throughout the world. They both deserve to be remembered by the world 50 years later.

“Ali was so kind, especially to kids. Through the years, they always kept that rivalry though. Neither of them wanted to give up an inch. The ‘Thrilla in Manila,’ where they almost both died, brought out the best of their rivalry. It was a brutal fight that is one of the best in boxing history.

“Even after that, every time they met each other, they would continue to fight. Even without punches. Eventually at the end, I think that changed a little. Their last meetings were humble. They both understood how important it was to recognize each other.”