Anthony Dirrell and Kyrone Davis finish in a split draw 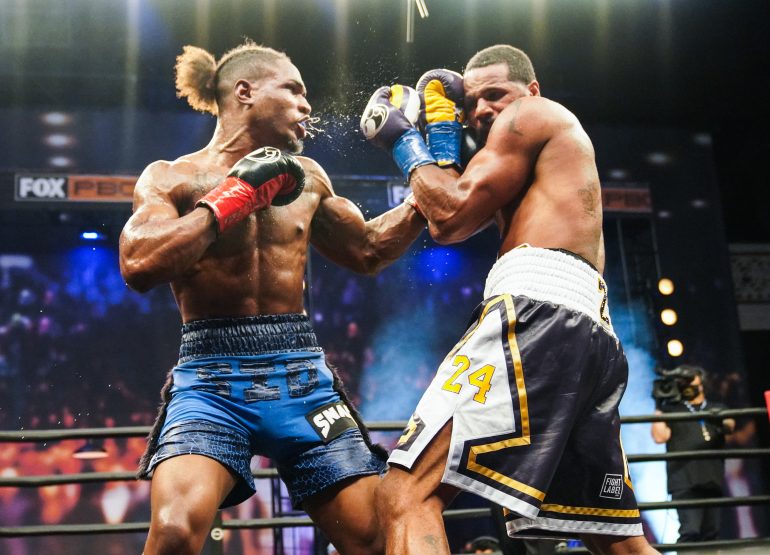 At the end of the eighth round Saturday night, Anthony Dirrell lifted his upper right lip, exposing a glimpse of his yellow gum shield and a smirk creased his face. He was telling Kyrone Davis, a decade younger, that the old man still had it.

A few moments later, Dirrell let his hands down and darted a sarcastic look at Davis’ corner, as if to say, “Really?”

That’s what everyone else pretty much thought after Dirrell, the former two-time WBC super middleweight titlist, and Davis fought to a 12-round split draw on the FOX PBC Fight Night show from the Shrine Auditorium and Expo Hall in Los Angeles, California.

“I thought I hit (Davis) with more cleaner punches, and I can’t control what the judges think,” Dirrell said. “Davis fought good. He came in with a good game plan. He started boxing. He moved around the ring. He didn’t engage. I was pressing the action the whole time.

“I didn’t get hit with what a lot he threw.”

Dirrell closed the fight like he fought parts of it, with a sneer on his face.

Dirrell started flat footed, and in contrast, Davis started on his toes. Slightly over a minute into the first, Dirrell landed a right uppercut, set up by a left to the body. That was enough to win a round where very little happened.

In the second, Davis struck first, landing a counter left hook. But it appeared Davis was giving the veteran Dirrell too much respect. Dirrell did look, flicking the jab and remaining patient. After the second, Dirrell walked back to his corner with a smirk on his face, as if to tell Davis, ‘You have nothing for me.’

After 6 minutes, the younger fighter didn’t.

As the third round was winding down, Dirrell closed the distance. Davis did cleave Dirrell’s defense with a left, but it appeared the fighter from Flint, Michigan, was throwing a shutout.

The fourth was Davis’ first good round.

In the first 30 seconds of the fifth, Davis was even more active, accompanied once again by Edwards’ “good, good!” In the last minute of the fifth, Dirrell landed a right uppercut, though it looked like Davis was climbing back into the fight. Davis closed the fifth with a left hook to the jaw that caught Dirrell. For the first time, Davis outlanded Dirrell in a round, 21-19.

Davis may have pulled even after six. His activity was picking up.

Davis countered very well in the seventh, and he seemed to again show greater activity. Neither fighter was able to hurt the other.

After seven, it was close.

As the last seconds were winding down in the eighth, Dirrell looked like he was fighting both Davis and Edwards. “We’re still here,” Dirrell seemed to say to Edwards.

With 2:10, Dirrell opened up. He slammed a right to Davis’ jaw. The consequence of Davis’ outside game began showing.

By the 10th, Dirrell looked like he squashed Davis’ mid-fight momentum. He had re-established a punching, using his 74½-inch reach, which was an inch-and-a-half inch greater than Davis’.

“I take it as a draw,” Edwards said. “Being there at ringside, I thought Kyrone completely outboxed Dirrell. I thought Kyrone won seven or eight rounds. You know how the game goes, and we’ll figure out whether or not we’ll go back to 160.

“Dirrell is still a good fighter, but this proves Kyrone is a good fighter. Anthony was doing a lot of talking to me during the fight, but I really like and respect Anthony. He’s a nice guy and he has a good coach, but he didn’t have to fight me.”

“I was looking for my right hook the whole time,” said Ramos, who has worked with elite fighters Terence Crawford and Maurice Hooker in training camp. “I want to be a champion at 21. I want to fight guys with names, veterans of the game.”

Another teenaged welterweight, Vito Mielnicki Jr. (8-0, 5 KOs), stopped Noe Lopez (10-4-1, 4 KOs) at 2:50 of the third round. “I’m happy with my performance, I came back to New Jersey two weeks ago and everything came on full circle and full form,” Mielnicki Jr. said.

Michel Rivera (20-0, 13 KOs) looks like Felix Trinidad and the 22-year-old junior welterweight fights a little like him, too. Rivera dominated Anthony Raíces (13-5, 11 KOs) from start to finish before ending it at 2:26 of the eighth round.

Anthony Cuba, a promising 18-year-old lightweight, was fortunate enough to get a majority four-round draw against Diego Elizondo (3-2-3). Somehow judge Dr. Lou Moret saw it 39-37 for Cuba (1-0-1, 1 KO), while judges Rudy Barragan and Zachary Young both turned in 38-38 scores.