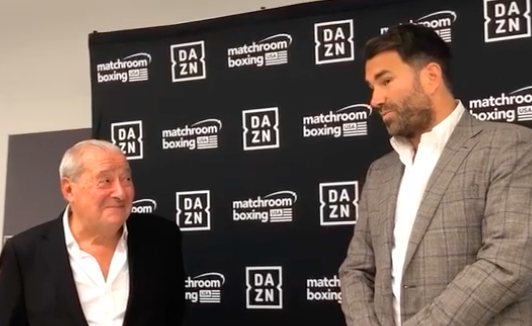 The boxing world is still waiting for the dust to settle on the Thursday purse bid development, and the shifts that occured when Triller popped in and announced their status as more than a fringe player in the game.

There is a strong possibility that more dust will get kicked up, though, being that feelings are still raw, in some cases, and this matter is still being sorted.

When I spoke to Top Rank promoter Bob Arum on Thursday night, I asked him about ramifications. He made no secret of the fact he is irked at Matchroom boss Eddie Hearn, for committing a supposed party foul. Basically, he didn’t like Eddie sliding into Teofimos’ DMS.

“We always took the position, if his fighter is involved in a purse bid, we’d stay away,” Arum told me. “The thinking was, it’s his fighter, if the fighter won on our platform, then he’d go back to his platform, so why do it? I think Al Haymon operates the same way (and unofficially decides to stay in his promotional lane in such a situation as the Lopez-Kambosos negotiation). OK, if you’re gonna make big, big money, then maybe you do it, but otherwise…There will be a time (maybe in a purse bid deal) that we’re gonna give it to Eddie right up his behind.”

I wanted to know if there would be other shoes dropping, maybe down the near line, maybe months later. Are there lingering bad feelings for Arum and Top Rank with this purse bid playing out as it did?

“There are lingering bad feelings, yeah, with Teofimo’s manager David McWater, I don’t appreciate the way he handled it,” Arum said. Arum told me he felt like McWater and Kambosos’ promoter Lou DiBella worked in concert to inflate the price for the IBF lightweight title defense. But when the Triller bid got announced, they shared in the surprise with Arum. When the bidding played out, Arum said, he felt like it was obvious that McWater and DiBella were legit stunned. “The kid and his father (Teofimo and Teofimo Sr.) activated Triller. But McWater has some fighters with us, and they will fight very competitively, no more gimmes,” Arum continued. “Why should we spend hundreds of thousands to build fighters up, and then that help is forgotten?” 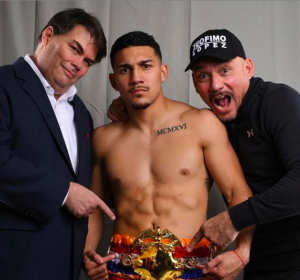 McWater, Teofimo the younger and the father cleaned up copious BWAA awards for 2020. That was a high–but today it’s a different feeling, as business hardball is playing out between Top Rank and Team Teofimo.

So, it seems a decent bet that it will be hard to get back to how it was, BL, “Before Lomachenko,” for Top Rank, Arum, Lopez and McWater and company. Lopez on Thursday did a podcast hit on the Mike Coppinger-Lance Pugmire podcast, and it was clear that he was trying to be chill, and see this all as just business. He waffled between sharing that he doesn’t take it personally, because it’s business, but also admitting that he feels he’s been disrespected.

“It sucks, it really does, it sucks to have it go this way, the relationship I’ve had with Top Rank, but it’s more so the relationship I had with ESPN, not more so of Top Rank,” the young man said. But his voice dripped with contempt when he took aim at Todd duBoef, Arum’s step-son who has been instrumental in the Top Rank transition to the streaming era, and their alliance with ESPN.

“But you know, Todd duBoef is the man, he knows what he’s doing, right? We gotta give kudos to Todd duBoef for distributing and working on his fighters really well. So congratulations Todd duBoef, you just lost the best fighter from your stable.”

To be clear, Lopez is still contracted to Top Rank for three-plus years.

The reason behind the acid tone Thursday regarding duBoef became more clear when we saw a story on The Athletic, by Mike Coppinger, which dropped Friday morning. Coppinger wrote, “On Feb. 11, Top Rank president Todd duBoef, Arum’s stepson, sent an email to Kevin Mayer, a strategic advisor at Access Industries, the primary shareholder of DAZN Group, expressing his displeasure after reading that Hearn planned to bid on the fight. According to Coppinger, duBoef communicated to the suits at DAZN, “This is a follow-up to our conversation, attached is an article which quotes Matchroom’s Eddie Hearn desire to make a bid on DAZN’s behalf for Teofimo Lopez v George Kambosos. Top Rank signed Lopez out of the Olympics and is in the middle of a long term Promotional Agreement. Lopez has been a mainstay and anchor on ESPN and ESPN+. If the article is true, I was shocked to see this brazen act by DAZN, particularly after I cleared ESPN programming off of May 8 for DAZN’s Canelo v Saunders big event moving our scheduled event (Ramirez v Taylor) to later in the month. I appreciate your attention to this and look forward to starting our conversations in the coming weeks.”

DAZN Group COO Ed McCarthy now is top dog in handling such a matter, as ex-ESPNer John Skipper will be moving on to other endeavors. DuBoef in the Coppinger piece took umbrage at emails getting leaked. It seems he was feeling like a mutual collegiality had been formed when Top Rank moved the 140-pound title fight between Jose Ramirez and Josh Taylor from May 8, on ESPN, the same proposed date slated for a Canelo Alvarez v Billy Joe Saunders battle on DAZN. Ramirez-Taylor is now set for May 22.

Coppinger wrote that duBoef believed Hearn wouldn’t place a bid on the Lopez v Kambosos match. In the piece, duBoef also takes aim at McWater, saying the advisor didn’t reach out and work to negotiate Lopez’ next in the right fashion. “Twenty-seven years in the business, I have never, through Oscar (De La Hoya), Floyd (Mayweather), Manny Pacquiao, managers like Cameron Dunkin, from James Prince to Mayweather Sr. to Al Haymon, I’ve never seen conduct like that as displayed by the Teofimo representative. Ever,” duBoef said, choosing to break out the flame-thrower on McWater. It surprised plenty of people who had surveyed the back and forth between Top Rank and the Lopez people in the last two months, and had decided that McWater looked to be working on getting the juiciest payday he could for his guy, after a career defining win. Arum seemed to be working to speed up a market reset, with Terence Crawford, and then Lopez, and McWater chafed at that, and the two sides colliding noisily kind of made sense, that was a school of thought. 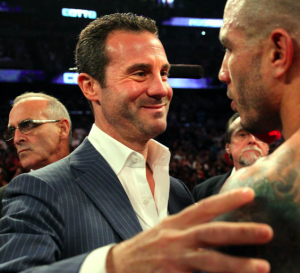 We can assume duBoef, seen here congratulating Miguel Cotto after a win, was pretty damn pissed that his email message to a DAZN executive got leaked.

So, getting back to the premise, will other shoes drop, or can Top Rank and Team Teofimo get back onto a pleasant page…

“We were planning to have Teofimo in the Garden (Madison Square Garden), now we’ll do a big fight with Shakur Stevenson on that date, and have a huge Puerto Rican undercard,” Arum continued. “Teofimo is under contract to us, so when he fights next, whether it’s September, October, November, in that area, it’ll be without a bid hanging over us, no difficult negotiation, no boogey-man coming in.”

And beyond that, what about how all this impacts, or doesn’t, a deal to match Tyson Fury, under contract to Top Rank, and Anthony Joshua, a Matchroom fighter?

If you didn’t see it, on Wednesday Fury spoke to ESPN and he expressed his thoughts on not having gloved up since his Feb. 22, 2020 sensational slaying of Deontay Wilder.

“I should have boxed, because I’ve been so inactive,” said the 32 year old Traveler, who is advised by the controversial Irishman Daniel Kinahan. “I’ve been out for over a year. By the time I fight again, looking at maybe June if this Joshua fight happens, that will be a year and six months out of the ring, which is not ideal preparation for any superfight.”

The 32 year old Fury (30-0-1) didn’t sound convinced that him and AJ would be battling anytime soon. “They’ve had a full year to try and make this fight happen,” Fury said. “Since the last Wilder fight, even before the Wilder fight, they were talking about a fight potentially between me and Joshua. They’ve had a full year to make something happen, and it hasn’t happened as of yet. It is what it is. We’re no further forward today than we were a year ago…Top Rank has to give me two fights this year. I will fight two times on [Top Rank network partner] ESPN. I don’t care who it is. If it’s not Joshua, we’re looking to fight in April or early May, and the end of the year. If it is Joshua, then June and the end of the year. Bang, bang. So, 2021 is looking bright.”

Well, it’s looking like a mixed bag, maybe, from outside looking in. It doesn’t take Sherlock Holmes to figure out that the recent press aimed at Kinahan had been read far and wide. Fury has publicly backed Kinahan, and optically, that’s not ideal for Top Rank, which is working underneath the Disney umbrella. We can only imagine what convos have been had about boxing and bedfellows among executives at top corporations.

I asked Arum if indeed there has been a shift in the progress of making Fury vs. AJ, and especially in the context of Arum working with Hearn. Any dark clouds on the horizon now? 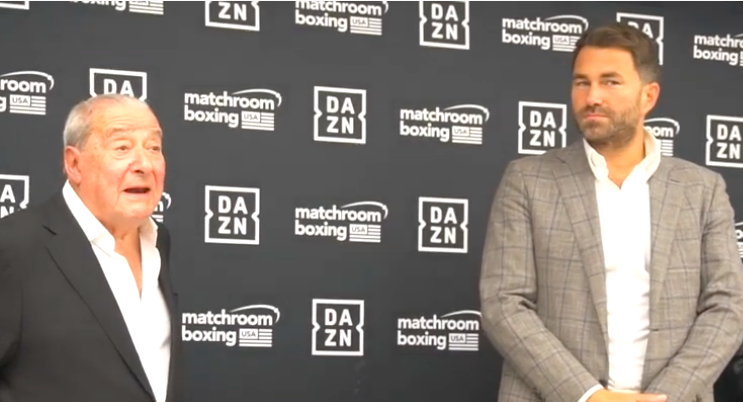 Arum and Hearn have sparred plenty, in the press, but always seem to be able to focus on a task, and hash out an agreement on a fight. Will the trend continue?

“Not even the slightest, we’re all professional,” Arum said. “If someone did something we didnt like, we’re not gonna shitcan something like Fury-AJ. Without disclosing anything, we’re getting very, very close to signing Fury-Joshua. If you ask me are there any issues, I couldn’t think of any. I know Tyson, he’s getting very antsy. He’s a fighter used to a one-page fight agreement, he’s like, ‘Get the fucking thing done, let’s go into camp.”’

No, Arum reiterated, no smoke to see, no fire to douse.