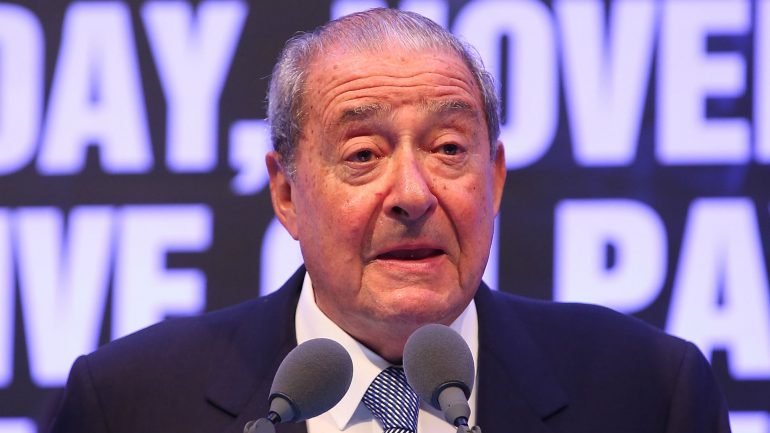 Arum got his shot Monday, and will, moving forward, enlist his fighters to spread the word that the vaccines are common sense weapons to shrink the virus' impact.
25
Feb
by Michael Woods

Yes, Bob Arum heard whispers that the Triller crew would have a check ready for the Teofimo Lopez-George Kambosos purse bid which would unfold in New Jersey on Thursday at 12 noon.

So he was sort of ready for it, but the size of the check, that had his eyebrows shooting to the sky.

Triller is an app and platform which allows users to upload their video snippet, with soundtrack, onto their digital stage for potential perusal by tens of millions of users. Ryan Kavanaugh of Triller, heading up the boxing side of their endeavor, posted the winning bid, of $6.018M, Eddie Hearn of Matchroom, who would place Lopez-Kambosos on DAZN, bid $3.5M, and Top Rank bid $2.3M.

I spoke to Arum a few hours later and asked him for his thoughts now that the dust had settled. “Everyone’s happy, though the bid being the size it was, was pretty crazy, that fight isn’t worth anywhere like that,” the promoter said. “Everyone’s a winner, the fighters, Lou DiBella, Top Rank, the only loser was Eddie Hearn and Matchroom, they put their nose where it shouldn’t have been. Eddie lost the bid, got Top Rank pissed at them, for no reason. They came away with nothing, everybody else involved came out ahead.” 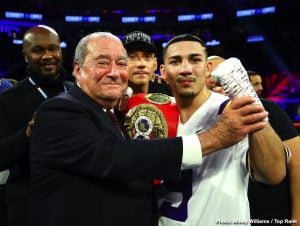 It was a different vibe when Lopez was on the come up. On the Pug and Copp podcast, Lopez admitted he was stung a bit by how this has played out.

No, Arum wasn’t irked at Triller, for going for this fight, even though Lopez is contracted for a few more years to Top Rank, and unless contractual terms were switched up, that will stay that way.

“I give it to them, if they are successful with this, this app, with a young audience, they can do a Teofimo fight, and then he comes back to ESPN, on PPV or otherwise, with an enhanced fan base.

Arum told me that he did expected Hearn to place a bid, even though the Brooklyn-born Hall of Famer publicly piped up and made clear he thought that would be bad form.

“Even though people we’re talking about him not doing it, with his ego, he put a bid in. But he’d be dealing with a fight that is not an ‘A’ fight,” Arum continued. “You have Teofimo coming off a victory against an elite guy, Lomachenko, fighting against not an elite lightweight, a guy who struggled with Lee Selby. It’s like a 25 to 1 fight, and we’ve got to try and do 2 to 1 and 3 to 1 fights, that’s where a lot of the upside is. You have everyone into these gaming sites, and it does big business if the fight is competitive. They did tremendous business on the Miguel Berchelt versus Oscar Valdez fight.”

Arum seemed to have not an ounce of animus at Ryan Kavanaugh and Triller, truly. He repeated that Top Rank did pretty well, netting almost $800,000–“not bad for a morning’s work,” he cracked–because the promoter of record is due typically around 20% of the winning bid from another promoter. “And Lou got almost $500,000, that’s really good, not easy to get.” But with Hearn, Arum wasn’t of a mind to gear down to chill mode. “Who was the loser? Eddie Hearn, he pissed us off, spent $5,000 to out a bid in, and he ended up with (the Italian word for “nothing).

(NOTE: I emailed Hearn, and offered him space to counter and will insert a reply when received.)

“And Triller felt they were paying good money to get value. God love them, I hope they do. Triller, they have a different marketing plan than all of us, and it may do very well,” Arum continued. “They may do very well in an environment none of us are using. You gotta give props to them for what they did on Tyson vs Jones. There’s something there, you have to understand it. They may very well have cards with one or two celebrities on there, and if that’s what the public wants, we’ll give it to them. If someone is doing it differently, and being more successful, then more power to them.”

If someone came to him and said “eat this delicious piece of pork,” he’d turn that down, Arum said. But someone with a tweaked model, he’s open minded, he shared. “Triller seems to be getting the young people, with celebs fighting each other, and if more people tune in, to see the celebs, and then say, ‘Boxing is interesting,” then that’s positive. I’m open to it, I’m not closed off to it. You gotta recognize succes, it is what it is. You can’t just continue being a purist. You have purist matches in the real boxing, but the other stuff, I understand what they did, in a sense I did some of that with Butterbean and Mia St. John. So if Kavanaugh is putting on some side show stuff, with other things, and it really connects with young people…I was never a complete purist.”