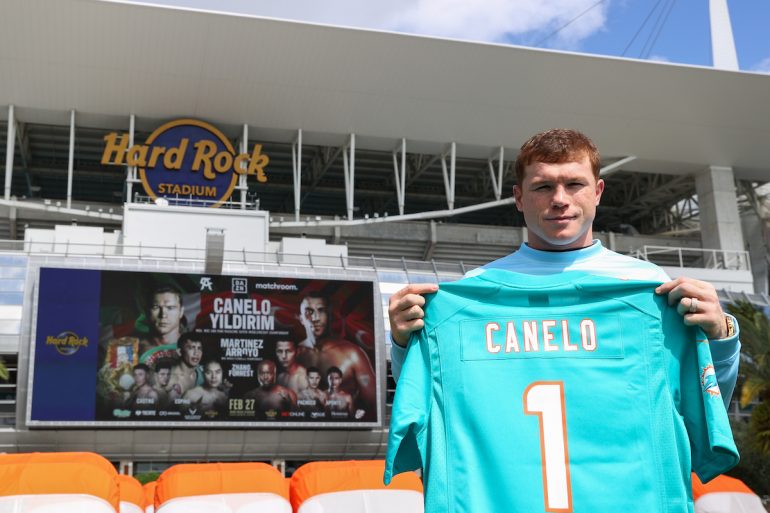 Canelo Alvarez, the pound-for-pound king and boxing’s biggest star, has achieved so much in his career that he is already a lock for the International Boxing Hall of Fame.

He has numerous quality victories, has won world titles in four weight classes and held unified belts as a junior middleweight and middleweight, and currently holds unified titles at super middleweight. He also, like many, views himself as No. 1 pound-for-pound.

“That’s what I am, thank God. I feel proud of that,” Alvarez told The Ring in an interview through an interpreter.

But being crowned as an undisputed four-belt world champion has thus far eluded Alvarez. It is something he is focused on accomplishing and determined to add to his already-formidable resume. It is a goal that is well within his reach at super middleweight by the end of 2021, as long as he continues to win.

There has never been an undisputed super middleweight world champion in the four-belt era and not even one during the three-belt era. But Alvarez won The Ring championship at 168 pounds and added two of the sanctioning organization belts to his collection on Dec. 19, when he rolled past England’s Callum Smith via lopsided unanimous decision to take his WBA title and the vacant WBC belt.

That put Alvarez halfway to his goal of claiming the four organization belts. But in order to keep his collection together he will take on heavy underdog Avni Yildirim, the WBC mandatory challenger, who stepped aside to allow Alvarez-Smith with the promise made to him that the winner would face him next.

Alvarez will be following through on that promise as he stays busy with the second of what could be as many as five fights between last December and this December when he squares off with Yildirim on Saturday night (DAZN and PPV, 7 ET) at Hard Rock Stadium in Miami, where a socially distanced crowd of 15,000 spectators will be permitted.

“That’s right, I want to accomplish that,” Alvarez said about his goal of becoming undisputed champion at super middleweight. “That’s why it’s making history for me, because it is difficult to do and there’s a reason why nobody has done it. So, that’s what I want — to create history, and that’s why I am here.”

Few give Yildirim (21-2, 12 KOs), 29, of Turkey, who was brought into Alvarez’s training camp as a sparring partner ahead of his 2018 middleweight championship rematch with Gennadiy Golovkin, much of a chance to beat Alvarez, or even to be competitive. 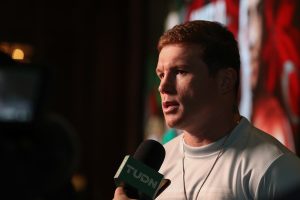 But given Alvarez’s plans to be so active and the promise he made to go through with the mandatory defense, he is unapologetic about facing an opponent few hold in high regard.

“I don’t need the titles but at this moment (trainer and manager) Eddy (Reynoso) and I have placed the goal of winning all the titles at 168 pounds because that will create one more stage of history in boxing for me and that’s what has to be done, and we’re doing it,” Alvarez said. “I know Yildirim maybe doesn’t have the big qualities but that’s not my problem. The thing I do is continue making history and that’s what’s in my path in order accomplish what I want to accomplish. And that’s how it is.”

Alvarez took great pride in defeating Smith so decisively and aims for even more big wins in the division.

“I felt really, really well, truly,” Alvarez said. “Beating No. 1 at 168 pounds and making it look the way it looked isn’t easy, but that’s the way I make it look because why? Because I am better, that’s it, final point. It doesn’t mean they’re not great fighters. But the thing is I really feel happy with the work, with the performance and I plan to continue doing this, continue training, continue learning more things at the gym and continue winning fights and continue winning titles.”

After the expected victory against Yildirim, Alvarez is due back in the ring for a three-belt unification fight with England’s Billy Joe Saunders (30-0, 14 KOs), 31, on May 8, the weekend of Cinco de Mayo. That deal has already been agreed to. Alvarez and Sanders were initially supposed to fight last May but the bout was never formally announced and then canceled when the sports world shut down last spring due to the coronavirus pandemic.

Alvarez has already acquainted himself with Saunders’ style, which would seem to pose far more problems than the no-frills style Yildirim possesses.

“His style is very difficult,” Alvarez said of Saunders. “He is a lefty. So, that makes it even more difficult. But I am a fighter who has fought against all kinds of styles. I am ready for any style. I just have to work.”

Most boxers proclaim that they would never dare look ahead with another fight just a few days away, but Alvarez admitted that he is doing just that.

Ideally, Alvarez hopes the fight with Saunders will take place with spectators in Las Vegas, which remains shut down due to the pandemic. But Alvarez’s Canelo Promotions recently was granted a promoters license by the Nevada State Athletic Commission and Alvarez is hopeful the spring fight can be there.

“That’s the reason why we obtained the license, in order to have our own license,” he said. “Right now we’re working with Eddie Hearn (of Matchroom Boxing) and we’ve been working very well co-promoting, but we have the opportunity of doing our own promotion and that’s why we obtained it. I would love (to fight Saunders, who is with Hearn) in Las Vegas. I would really love to return to Las Vegas. Hopefully, everything goes back to normal due to the pandemic and we will be able to return to Las Vegas.”

Alvarez was willing to look even further ahead to the fall, when, assuming all goes well for him against Yildirim and Saunders, he aims to be back in action in September on Mexican Independence Day weekend. He hopes to fight IBF super middleweight titlist Caleb Plant (21-0, 12 KOs), 28, of Las Vegas, for the undisputed championship.

Alvarez is a broadcast free agent and on a two-fight promotional deal with Hearn that ends after the May fight, so he is free to negotiate with Premier Boxing Champions, which represents Plant, who has been fighting on Fox. PBC and Alvarez had positive talks before Alvarez made his current deal with Hearn, and Alvarez and Plant both say they are interested in facing each other.

“He’s a great fighter,” Alvarez said of Plant. “He’s a fighter that has a lot of ability and obviously if he’s a champion, he’s in my path and I’m going to go for him.”

Plant retained his title with a shutout win over mandatory challenger and former titlist Caleb Truax on Jan. 30, a fight Plant took even though it wasn’t due so he could clear the deck of a mandatory obligation and be available for Alvarez later in the year. Alvarez said he watched some of Plant-Truax.

“I saw two, three rounds of it and I fell asleep,” he said.

Asked if he dozed off because he was tired or because it was a boring fight, Alvarez answered in English. “Maybe both,” he said with a laugh.

At a time when other boxers are struggling to get their schedules solidified because of the pandemic, Alvarez has not had that problem because of his stature in the sport. He said he feels for the others but happy he can set things up well ahead of time and then concentrate on training.

“I earned it. I have to work really hard for this and I earned it,” Alvarez said. “Now all fighters want to fight me and I want to fight the best and continue winning titles, continue creating history.”

Again looking ahead, Alvarez said a win in September could pave the way for yet another fight in December, the kind of robust schedule no elite pound-for-pound-caliber boxer has done since Oscar De La Hoya fought five times in 1997.

“Yes, why not, maybe,” Alvarez said in English about fighting in December. 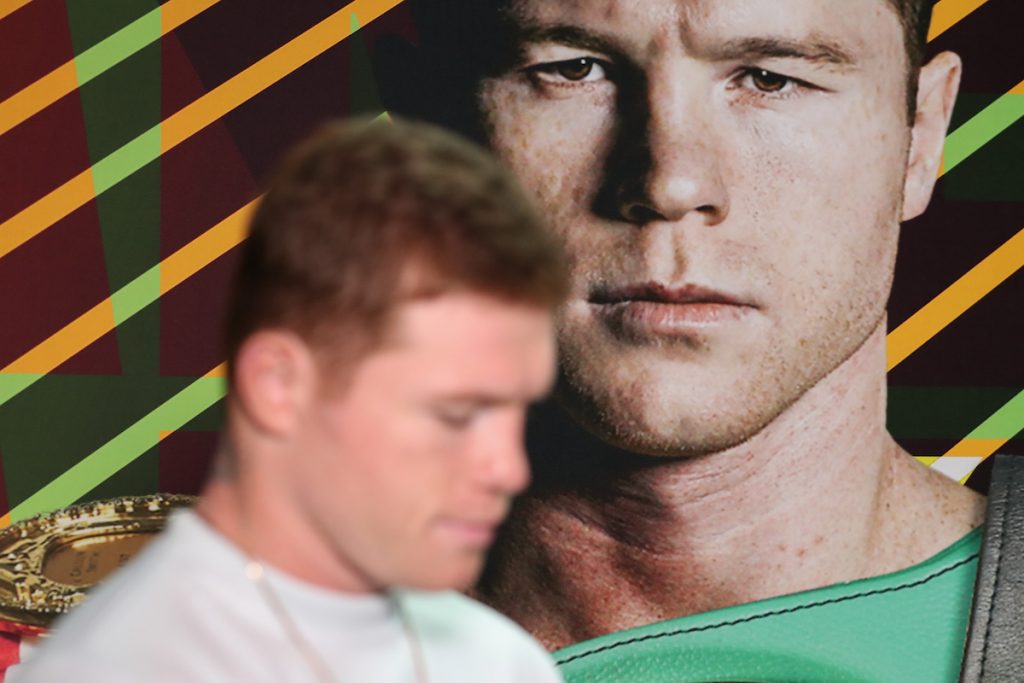 Might that be for a long-awaited third showdown with rival Golovkin (41-1-1, 36 KOs), against whom he is 1-0-1 with both results controversial?

“I’m open to anything,” Alvarez said. “And as I said, I want the best fights for the people, for the fans. Right now, my goal is to unify. If that fight (with GGG comes up) then why not?”

Whatever fights Alvarez takes, he did say he has no plans to return to light heavyweight, where he fought in November 2019 and scored a spectacular 11th-round knockout of three-time world titlist Sergey Kovalev to take his belt before returning to super middleweight.

He does know that he plans to stay as busy as possible and regularly fight top opponents. He is in the midst of his prime and said he has no problem staying in training virtually year-round since it is a means to and end of accomplishing his goal.

“I’m truly used to working,” Alvarez said. “I feel very well being at the gym and I’m ready at any moment.”